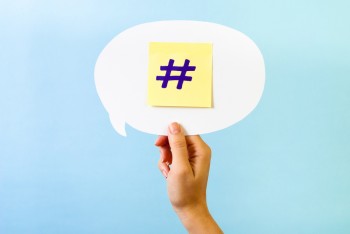 Twitter is a great environment for content marketing. It’s searchable, shareable and quickly distributes content to large audiences. A lot of this has to do with hashtags, which make finding trending and relevant posts incredibly easy. They didn’t start as a default feature, but people started to adopt them to organize Tweets. Twitter eventually embraced them, and the service’s modern sharing economy was born.

For proof of the hashtag’s utility and influence, look no further than Instagram. The social photo network also uses these markers as a way to help users find followers and make pictures discoverable. It’s gotten to the point where it’s hard to imagine either of these platforms without their trademark #tags.

And then there’s Facebook. Last year, the social giant introduced the hashtag to its platform, but the practice never really took off the way it did on Twitter and Instagram. As Brafton reported, brands started to embrace tagging, but it hasn’t become standard practice – perhaps with good reason.

According to a Socialbakers study, the more hashtags brands use, the less likely they are to see engagement on their posts. For example, posts featuring one or two tags netted businesses an average of 593 interactions, while those with three to five dropped to 416. Worst of all were posts with 10 or more hashtags, which saw as few as 188 interactions, on average.

This speaks to the fundamental difference between Facebook and other social networks. As Brafton reported, posts with photos generate much more activity and engagement than other types of shares. In contrast, Tweets are bound by 140-character limits, so what you say may be more important and hashtags are a way of streamlining Twitter navigation.

So what can businesses do for social media marketing if hashtags aren’t the answer? Besides photos, other types of visual media get a lot of clicks. Videos, infographics and other imagery is what motivates Facebook followers to click, like and share in large numbers.

It’s also worth noting that the original purpose of hashtags, to organize groups and conversations, are actually available on Facebook with much less hassle. So instead of looking for a trending tag, as one would on Twitter, businesses can simply find relevant local or industry groups on Facebook and make direct posts and mentions there. Twitter is simply an abbreviated (but unique) version of other social systems, and most features exist across platforms. It just takes a bit of time and research to discover them.