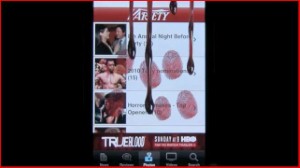 When Steve Jobs unveiled the iAd platform, he said he wanted to give advertisers the opportunity to capitalize on the emotion of television and interactivity of the web to engage on-the-go consumers. Now, Medialets – the agency behind the mobile campaign for the hit HBO TV show TrueBlood – is demonstrating how to achieve a big promotional hit via the iPhone’s small screen.

In honor of the third season of True Blood, HBO partnered with Medialets to develop a rich media mobile ad campaign that iPhone users wouldn’t be able to ignore. When users open apps for participating publishers, bloody fingerprints appear wherever they tap their screens. Once they make enough prints, blood drizzles down from the top, eventually covering the screen. Users then have the chance to watch a trailer for the show’s latest season.

MobileMarketer.com reports that the campaign garnered more than 1 million impressions across applications. The marketing firm’s CEO, Eric Litman, told the source 98 percent of consumers who saw the expanded ad reported they were “very engaged.” This engagement is translating in other channels, as well. Medialets’ YouTube video of the mobile campaign has generated more than 13,000 views, seemingly from users who would not otherwise have access to the ad as one commenter wrote the video “makes me want an iPhone.”

HBO seems to be satisfied with the results of the mobile rich media campaign – officials told MobileMarketer.com 5.1 million viewers tuned in to the season three premiere, representing a 38 percent increase over the second season premiere and a 19 percent increase over general viewership.

Rich media ad units are more expensive than traditional mobile banner or display ads, but they could help marketers stand out on an increasingly crowded platform. These ad units place the emphasis on offering consumers engaging content, which is key to any successful campaign.

It seems as though other brands will move into the rich media mobile market soon. A recent eMarketer report indicates that marketers will spend more than $35 million on mobile video this year, and they are predicted to increase their interactive mobile ad content, spending as much as $206 million by 2014.