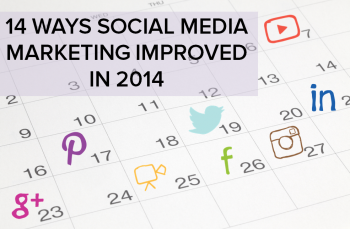 Last year around this time, we predicted what the social media marketing trends of 2014 would look like. We’ll admit we weren’t exactly correct on the emergence of Google+ as a leading player – but we’ll give ourselves a pat on the back when it came to visuals. With the eruption of GIF images and videos, whether on YouTube, SnapChat or Vine – it was pretty clear they were the victors of this year’s social media horse race.

Other, smaller feats were accomplished this year that have made social media marketing even more manageable and exciting for strategists.

Here are some of the best ways social media marketing has improved across channels this year. Let us know your favorites updates in the comments.

What: Prior to 2014, viewers had to click Pins and open the images in a new window to see the animated clips. But in January, Pinterest began testing animated images directly on brands’ Pinboards. Read more

Pro for marketers: Given that Pinterest is one of the most effective social networks for B2C marketing, it makes sense to bring another dimension into the fold. GIFs put images in motion, allowing clothing brands to show apparel against different backdrops or even potentially display the items in movement on models.

What: Originally only open to a select few professionals who were considered universal influencers, such as Bill Gates or Maria Shriver, LinkedIn began to allow more users access to Influencer posting in February. Read more

Pro for marketers: This is an excellent opportunity to go beyond sharing links to blog posts. That has always been available to LinkedIn users, but now content marketing professionals showcase their writing in a post for a specific LinkedIn community.

What: Twitter announced the introduction of Website Cards, which are simply brief previews of brands’ external sites. They show up the same way targeted Twitter ads do, but they aren’t designed to look like regular Tweets. Instead, they actively invite users to leave the network and go to an external landing page with pre-designed text and pictures. Read more

Pro for marketers: This is an excellent social lead generation tool. Ideally you could use this to promote an eBook or newsletter signups. It allows brands to get more information about people once they’ve gone from a Website Card to a commercial page.

What: Beneath users’ pictures and descriptions, Google+ began showing a field indicating how many times users’ profiles have been viewed. Read more

Pro for marketers: This helps brands assess how much interest they’re generating on the platform. This new metric also provides an essential piece of information for users: context. It’s well and good to have six +1s, but what does this mean? It is now possible to gauge interest in the context of overall viewership, rather than in a vacuum.

What: Twitter announced a new web interface in April that was said to be tailored for visuals and engagement.This was the first time users could filter Tweets with photos and videos, or see Tweets and all the replies to them, in segmented lists. Read more

Pro for marketers: Many of these changes signaled Twitter’s willingness to accommodate social marketing. Highlighting engagement, emphasizing visuals and lowering the bars to entry for new users all contributed to making Twitter a richer marketing environment.

What: Vine broke out of the mobile-only realm to bring catchy video content to computer monitors across the web. Read more

Pro for marketers: Hybrid social and video channels have always been seen as a better fit for B2C organizations because users are on the sites as individuals – not professionals. But with Vine’s resurgence, they reclaimed untapped potential to use the animated clips as micro-tutorials for how to use software or mini demos for service subscriptions.

What: Companies that run branded YouTube channels can now upload three-minute intros that precede their own videos. The idea is that they’ll remind viewers what they’re watching and connect visual content with a larger campaign on other parts of the web. Read more

Pro for marketers:  These intro videos can be applied retroactively to any videos on a channel, or changed at any time. That way, companies can accommodate current brand initiatives as well as future strategies. The intros won’t be listed as videos users can watch, but they will display between videos in a playlist, or before any individual video on a channel.

What: Google announced it was folding Google+ Pages and Place Pages into a new platform called ‘Google My Business.’ Read more

Pro for marketers: Based on the announcement about ‘My Business,’ this is essentially a straight shot into SERPs and Maps listings, because organizations are basically giving Google their data on a silver platter. Another major plus of ‘Google My Business’ is that it gives marketers access to Google+ analytics data.

What: The platform announced that it finally began supporting animated GIF images, which have taken the internet by storm. In the past, users that wanted to share GIFs could either link URLs that sent visitors off-site or try third-party apps, like Giphy, that weren’t always reliable. Read more

Pro for marketers: By drawing the eyes of users and implementing the latest and greatest form of media on social networks, it’s easy to stand out among other voices clamoring for attention.

Pro for marketers: Given the strong emphasis LinkedIn places on personal/professional connections, it makes sense that it’s pushing for mobile usage patterns. People meeting face-to-face and on-the-go can instantly connect, share content and forge relationships when all they need to do is quickly access an app.

What: Pinterest announced a new feature that allows Pinners to share and communicate directly about their favorite finds, which could boost engagement on the site and even increase off-site conversions. Read more

Pro for marketers: This feature helps users communicate directly and in real-time about the brand content they’re clicking and sharing. More engagement generally means greater opportunity for conversion, because it’s a signal of stronger buy-in.

What:  Twitter offered up a big win for online brands by releasing the Tweet Activity Dashboard to all users in August. Now, any account can break down individual Tweets and analyze specific numbers, such as impressions, engagement over time, clicks, Retweets and Favorites. Read more

Pro for marketers: They have access to a wealth of metrics that can be used to actively improve any social marketing campaign. What: A new Business Suite of measurement tools made Instagram an even more viable marketing option in August. Metrics for impressions, reach and engagement became available with this update. Read more

Pro for marketers: This new wealth of data can help brands do more than stab in the dark with Instagram as they share pictures. Now they can compare engagement for posts, build on past successes and build a brand’s presence on one of the fastest-growing social channels.

What: The network’s “Buy now” button went live for participating businesses in September, giving customers a much quicker path from Tweet to purchase. Read more

Pro for marketers: The functionality may not be appropriate for every business – especially companies working in the B2B realm – but some organizations will find it’s an incredibly useful tool for shortening the buyer’s journey.