Visibility can be a loaded term, whether it’s being applied in the context of SEO, survey results or something more abstract, such as Jeff Baker’s level of “wokeness.”

We begin Episode 209 of Above the Fold with the former, as Jeff & co-host Francis Ma are joined by Eli Schwartz, formerly of Survey Monkey, now operating as an independent consultant specializing in enterprise-level projects.

Jeff is still in Colombia – he begins by confirming that, having been there three weeks, he is now “woke.” He freely flaunts his no-strings-attached, bachelor-of-the-WiFi-tribe steez and patronizingly reminds Francis, father of two young children, that he needs to stop short changing himself and travel the world. He recaps a recent visit to some dust blown Narcos-esque saloon outside Medellin, where he drank from a WWI-era espresso machine. It took 15 minutes to brew this cowboy coffee, after which he “was running at 9,000 RPMs.”

Francis, meanwhile, has never had an espresso or even avocado toast. What a bumpkin. 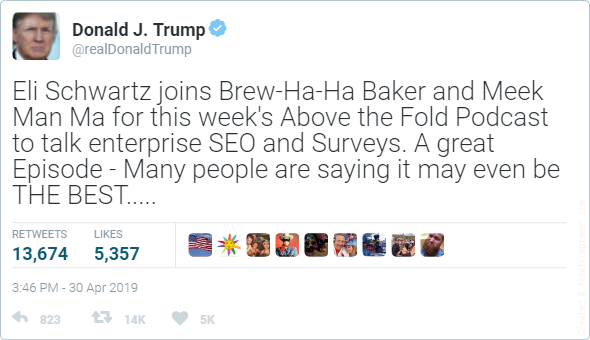 Schwartz, resisting the urge to shout “Hey fools, I’m here too,” is segued in just in time to talk about enterprise SEO and his work on surveys. Eli used to be with Survey Monkey, where he effectively started reverse-engineering how traffic was generated. When he joined SM there was almost no organic traffic, but after seven years, it’s become one of their largest revenue channels. Where he used to believe SEO as an initiative might fall by the wayside, he’s now more excited than ever about what the future holds. To that end, he’s ventured out on his own, hand picking certain larger companies and doing the heavy lifting to amp up their visibility.

Getting his dander up, Jeff says there’s a lot of pessimism surrounding the future of SEO. In predictable fanboy fashion, he notes Rand Fishkin’s recent focus on search-no-clicks and voice-automation trends – the likes of which have drawn Baker’s ire because of the many ways they mess with the internet’s ecosystem.

But Eli notes maybe 85% of Google revenue comes from clicks on ads, while only 4% of search goes toward those ads. He estimates 40% of all traffic is still going toward organic results. So while these other trends are progressing, we’re actually searching more often thanks to a multitude of search-enabled devices that can mitigate the effects.

Bad actors visible to all

To those in the ecommerce space, SEO might look like a losing battle, but according to Eli, “the reason Amazon dominates search results is they cared about SEO early on.” Now, the WalMarts, Macy’s and Best Buys of the world have come to the conclusion they need to refocus their strategies. Jeff calls this initial approach “arrogance’ – some might deem it ignorance, or a lack of foresightedness.

Whatever the reason, it’s undeniably hard for a lot of larger companies to care about SEO when it requires so many different employees and teams working in tandem.

“Everything has to go right, and there are not enough companies for whom organic is important enough that it should go right,” Schwartz explains.

This leads to a lot of bad content visibility, because the potentially good creators aren’t putting enough stuff out there. As is his tendency, Francis begins to lament the internet’s creative demise, before the trajectory of the conversation snaps him back to reality.

Truth be told, Eli continues, there isn’t a lot of position-zero action around ecommerce. People aren’t necessarily buying products from their devices via voice-activated search. There may be an opportunity there, but it’s not yet fully materialized. Whenever it does, Jeff foresees some issues related to conflicts of interest: Position zero is currently informational, but what if Google starts “choosing winners,” like, say, Bed, Bath & Beyond?

You can feel him climbing aboard his Colombian soapbox before Eli pulls it out from underneath him, saying that, in reality it’s not that much different than Amazon selling from other retailers.

In typical “this is for our audience” fashion, Francis asks Eli: “What is enterprise SEO?” More pointedly, Jeff follows by asking what it’s like to work with enterprise-level companies.

To hear Schwartz tell it, wrangling operations at this scale is a lot like managing the egos of an NBA super team. Soon-to-be-free-agent and known malcontent Jimmy Butler has a different agenda from happy-go-lucky 25-year-old social media darling and franchise cornerstone Joel Embiid. But Eli, who’s Brett Brown in this suddenly laborious analogy, has to ensure everyone’s sometimes siloed day-to-day motives and performance align with the goals of the broader (Philadelphia 76ers) organization.

“You need a different sort of buy-in [from different people],” Eli explains, saying he enjoys the tactical aspects of diplomacy. Frankly, a lot of these people’s objectives are not his objectives.

“It’s a process of herding cats, where you want everyone to go along with your plan, but also make it a part of their plan.”

Sometimes it even involves fear mongering, painting a doom-and-gloom scenario. Many of these companies have millions of pages, so from a practical standpoint it’s not about how to optimize a title tag, but rather, how to write the code that optimizes millions of title tags.

Smaller businesses can be more hands-on, but larger ones are better off outsourcing in bulk. At scale, the question becomes “how many of these terms do we win?” In some cases, “optimizing” is a misnomer because Google has never even crawled certain pages. So convincing enterprise operations that this is a worthwhile undertaking may require an adjustment to their fundamental mentality.

“One of the things I’ve found that has been most successful is building an internal personal brand – not as an order-taker or an order-giver; but still as an authority,” Schwartz elaborates. That carries some cache in an era when any old joker can read a book about SEO just like “you can become a Crossfit trainer over the weekend.”

“I was really hoping I wouldn’t be the crappy SEO book,” Jeff says, audibly blushing after Francis outs him for a side hustle.

Following a brief but awkward silence, during which Jeff is presumably fuming at Francis, we head toward the home stretch by chopping up the topic of surveys.

The group agrees any survey that more specifically identifies demographics – i.e., “Male Android users dropping their phones in the toilet” – immediately becomes more interesting. Eli acknowledges it can be tough to slice the demographics in a manner that results in reasonable sample sizes. But as far as content takeaways go, “if you don’t have statistics, you just made it up.”

Francis notes he enjoys the “visual” as the discussion of dudes peeing while texting ensues. Eli seems unsure of what to do with this information, but he pivots, sharing that he did a survey related to DuckDuckGo users. It resulted in their CEO actually following up asking if they could use his data. The guys have been shouting out DDG for a while, trying to invite them on the podcast, to no avail. Sounds like Eli may just be their in.

Bringing visibility – and legitimacy – to survey results requires a significant sample size. But depending on the topic, that size may not need to exceed 30, because a 10% figure of that group still resonates. You want the statistics to be real enough that there’s no noise involved, but if you expanded the survey to 300 people, you would likely garner similar survey respondent trends. And after all, it costs time and money to get more people to respond.

Even if you’re short on time, resources or newsletter subscribers, there are a cheaper tools, like Survey Monkey and Google Forms, or you can even employ Facebook. Alternatively, there’s always the option of using someone else’s list.

In other words, there’s really no excuse for being invisible, provided you’re willing to take a tactical approach to making your content sing. Just look at Jeff and Francis. These guys have no business getting the Eli Schwartzes of world to join their podcast, yet here we are. We can only hope that visibility extends to the DuckDuckGo reps of the internet realm.

‘Til then, here’s your context-free quote of the week:

“I could have chewed glass.”

Above the Fold episode 3:1 recap: On sales enablement and why Facebook is failing you

On this episode of Above the Fold, a human wasp hive comes into contact with an angry bear and then they attack Facebook together.

‘Above the Fold’ episode recap: Hangin’ with the workin’ from homies

WFH: Life goal or does it give birth to social hermits?