WFH: Life goal or does it give birth to social hermits? That’s our rather unwieldy title for Episode 204 of Above the Fold, with co-hosts Jeff Baker and Francis Ma exploring the benefits and drawbacks of digital nomading, as well as the maybe-now-nonexistent stigma surrounding remote work.

Work-life balance, as its cliche is known, is an ever-present priority for companies of all sizes and missions. But what does that look like, exactly?

Citing a Buffer report on the state of remote work, full-time remote worker Jeff notes the emerging societal acceptance parallels the proliferation of a well-known millennial stereotype: People in their 20s and 30s tend to value experiences more than things. The flexibility afforded remote workers fosters more travel and more time spent with family and friends. There’s less time lost to commuting, and ample opportunity to further a healthier, more whole lifestyle. And (surprise!), companies are finding these workers are actually more productive.

Before diving deep into the study’s findings, Ma and Baker graze on an assortment of smaller potatoes, ranging from Francis’ “cheating” on Jeff as a podcast guest elsewhere, to heeding any of the organizational advice from last week’s ATF guest, Nadya Khoja (they’re not), and whether big data has truly given way to big ideas, as posited in a recent Forbes piece.

On that last note, Target’s infamy is cited, and our guys take the retail giant to task once more. The point seems to be that in the wake of high-profile scandals such as those plaguing Target, Facebook and the lot, it’s best to chill with the data hoarding talk.

“You probably shouldn’t position yourself as having all the data,” Francis says, conjuring images of Scrooge McDuck swimming in golden piles of the stuff.

Jeff marvels at how quickly the positioning has flipped. A few years ago it was a selling point – now it’s like a “Scarlet Letter,” because if you’re collecting too much data, that’s a red flag. More crimson metaphors to come, for sure.

“You should know your target audience, their interests, etcetera, but you don’t need to know, to the day, when people are going to conceive – and then market baby products accordingly,” Francis exclaims. “Get out of my house, Target.”

Know your employees, but don’t be weird about it

It’s an imperfect segue, but the notion of business empathy does transcend the big-data and work-life conversations. Corporations are on one hand playing catch-up with their remote work policies, seeking to cater to employees’ evolving expectations, yet on the other coming off tone-deaf by not recognizing blatant intrusions of personal space.

Francis, who’s mostly in the office, gives us the old-school take on working from home:

“It’s emerging but it’s still kind of a foreign concept to a lot of people,” he garbles, sounding like a Clint Eastwood-sidekick character.

He concedes that the spectrum of people who do it occasionally – both for family reasons or in the interest of also getting non-work stuff done – is expanding (and includes him). More workplaces are allowing it for exactly those sorts of reasons, contributing to a whole new mentality and movement.

But the digital nomads are on the other end of the spectrum. Ma and Baker lament the very real isolation risks associated with full-time remote operations. Ma values water cooler talk and openly fears Baker is becoming a hermit because he doesn’t have the pleasure of awkwardly mumbling at people on his way to the restroom daily.

“And you lose the 5 or 6 pm beer,” bemoans Old Man Ma, speaking purely for himself.

Let’s stop being so negative, Jeff says, and he wants to talk stats. 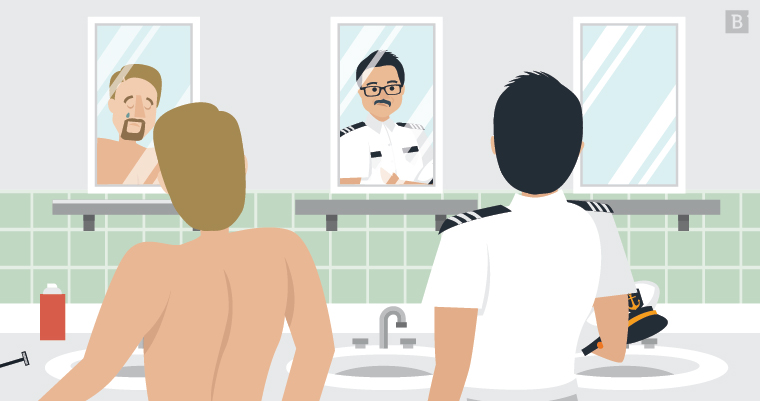 Eighty-four percent of the people surveyed work from home primarily, rather than in a coffee shop, shared space, public yurt, whatever. That could certainly be a problem, Jeff acknowledges, especially when people aren’t taking all their (often unlimited) vacation days, and therefore never truly detaching themselves from their work. And with no commute, people often do end up working more, because there’s no forced end time.

Indeed, 22 percent of respondents say unplugging is really difficult. But by and large, the returns outweigh the risks. As a remote worker still committed to societal contributions, “you just have to get out there,” insists Baker, who’s walking the walk too. He’s joined a possible cult called WiFi Tribe and he’s meeting a group of complete strangers in Colombia next month… to work.

Since we haven’t talked commuting enough, Jeff regails us with some BART tales. “Soul crushing mega commutes” are contributing, along with asinine costs of living, to the gross dichotomy that’s taken shape in Silicon Valley.

Francis, all boat-shoe, lobster-shorts New England, matter-of-factly mentions “listening to classical music and reading on my commute.” Jeff claps back with explicit descriptions of poor hygiene and people with questionable intentions wielding bolt cutters. The Bay Area is the cradle of innovation and revolutionary ideation, a cutting-edge metropolitan hub, yet their public transportation system is a urine-tinged abomination that’s actually driving people out.

“I’m good – hard pass,” Baker assures, sounding especially scorned by the rat race. Rent and home prices are out of control, the place is crawling with self-important super-rich dudes (always dudes), and you have to ride two hours in a tin can to get to a very small, crowded office. He manages to cry about the discontinuation of a proposed SF-to-LA high-speed-rail project in the next breath. Suffice it to say, we’ve lost him to the WiFi nation.

We close with a nice touch – words of wisdom from noted digital nomads surveyed randomly by Jeff. A sample:

The greatest attribute of #remoteworklife is “the flexibility to live and explore where you work without losing momentum in your career,” says random survey taker.

And indeed, there’s no reason to deny what’s now statistically straightforward: Remote working works. More companies are taking notice, having that “empathy,” and it’s being paid back multifold. You don’t have to boast Hooli-style rooftop gardens or balance balls to help employees level out. Foster their autonomy, their self sufficiency and their zest for experiences, and these workers will return digital dividends. Millennials included.

“I can neither confirm nor deny if we can be evil, at all.”