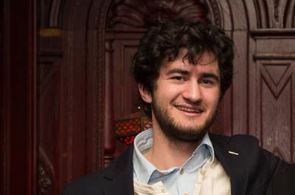 Brafton editor Matt Kaplan once said “it’s the rare writer who can write voicey, bloggy content for tech and IT clients with strict subject matter concerns.” When Matt said this he had someone in mind, and it none other than our senior tech writer, Dylan Cinti.

Dylan’s been writing with our tech team for more than a year – but it didn’t take long for him to be noticed among his peers and editors. Whether he was tasked with writing about the Chilean mining disaster or hybrid cloud migration, his specialty has always been in-depth research. And as Matt noted, Dylan has an “impeccable eye for detail and an uncanny ability to tackle high subject matter expertise clients.”

Dylan admitted our Chicago tech desk might not be the loudest or most talkative team, but he said there’s a special camaraderie between the writers.

“We’re a quiet, chilled-out team,” Dylan said. “We don’t say much to each other because we don’t have to. There’s just a lot of mutual respect and meaningful silence.”

Learn more about Dylan in our Brafton Q&A: Dylan and his teammates at Brafton’s annual holiday party.

An atmosphere of respect.

A quilt my grandmother made for me.

Any day Daniel Perret is also in the office and we go on a meditative walk.

Getting into the zone, when that happens.

I am extremely good at the game Set (aka The Family Game of Visual Perception). Could’ve gone pro but chose Brafton instead.

These 5 bad habits are making you a sh*tty digital marketer, and how to fix that

These 5 common digital marketing thinking traps are too easy to fall into. Here’s how to shift your attention to things that actually matter.