The power of voice in content: How to speak to CEOs when you're not one | Brafton 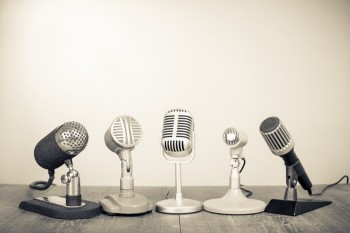 Sometimes, it’s not the worst thing to hear voices in your head – well, that’s given you’re a content writer.

Voice is central to content marketing and blogging. You speak for your brand, and that voice needs to be instantly recognizable and resonate with the reader. That can become a challenge when you need to write in a voice that you’re unfamiliar with. For example, you might be asked to speak to no-nonsense suits in the executive suite, when you haven’t so much as sniffed a glass of vintage scotch.

Yet that can also swing the other way, say, if you’re writing for a nonprofit that needs rousing calls for engagement among MIllennials for a social cause or a biotech firm that espouses thought leadership in human genomics targeting scientists. Your marketing success will depend on the voice and its ability to register with readers, creating in them trust and an interest to read further.

Only, not everyone is privy to the boardroom and the manner of speak inside it, or the terminology inside a lab or even the vernacular of students. The reality is the audience you need to gain acceptance from and speak convincingly to may be an entity entirely foreign. A lack of experience may loom large, but it’s not an insurmountable obstacle to crafting a believable voice – and the message it carries.

Finding that voice relies on understanding it as a creative concept and not just a product of being in those situations.

Although it’s not strictly marketing, it’s worth looking at an acclaimed mainstream example that successfully spoke in an unfamiliar voice. The best-selling novel “The Fault in Our Stars” tells the story of a teenage girl living with cancer and is narrated from her first-person point of view. Except, the book was written by John Green, a 37-year-old man. While Green had inspiration in a real-life encounter that inspired the story, the book could not have succeeded with audiences as it did without the strength of Hazel’s voice.

What happened was Green treated voice as something beyond the words Hazel used, but what they embodied, things like mortality and relationships, things we can all connect with and imagine ourselves in. The word is only the symbol for the thing, and as marketers, expounding and tapping into that energy will drive reader engagement.

The word is only the symbol for the thing, and as marketers, expounding and tapping into that energy will drive reader engagement.

Words are cheap, understanding your audience is priceless

When voice fails, it’s often due to simplification: CEOs are all MBAs, so they have to say a lot of smart stuff like vertical integration and diversification of assets, right?

Giving consideration to what your reader is thinking allows you to find the voice that will speak to them.

Well, yes and no. Those are things an executive might say, but they don’t work just plopped into content for a cheap nod of the head from the reader in acknowledgement that, yes, they are indeed familiar with such a business phrase. To wield such words, it requires immersion into that line of thinking – it requires an imagination.

Giving consideration to what your reader is thinking allows you to find the voice that will speak to them. Forget for a minute that your audience is a human resources professional at a small business.

As a person what is he or she thinking about? It may be the amorphous “talent gap,” but it could just as well be the need for organization in the office. It could be a list of to-dos: raising staff awareness for flu season, getting managers to understand the importance of onboarding for new hires, even putting together an office event.

When you start to think like an HR professional, the writing will follow. The audience’s need for organization may manifest in content by having informative subheads and tight sentence structure, easily readable for the busied mind and in a format they can just get. Where HR might send a stern Friday email to staff about cleaning dirty dishes and still tack on “don’t do anything I wouldn’t do this weekend,” content writers might assume a tone that carries that same going-about-business tone, but still from a benevolent voice.

More than just talking the talk

To bring it back to our favorite 86th floor executive, let’s think again: What is vertical integration?

Jack Donaghy would tell you it’s the practice of having a business control the means to production along various lines of a product. It would look like a national supermarket chain not only owning physical groceries, but the farms where foods are grown, the packaging and processing facilities for products and the trucking fleet to transport it all. The scope is an incredible thing to behold – and that’s something those executives have to think of every day. It’s likely you would feel just as rushed daily if your mental was dominated with business concerns of such monumental consequence.

The words “vertical integration” themselves conjure imposing images. When thinking of vertical integration, it’s hard to not picture some abstract monolith extending skyward, a totem pole behemoth built on massive blocks of business that represent entire industries. When you can understand vertical integration this way, you will be able to speak to executives. As large as those parts of the business in sum are, the big picture (the biggest of them all) is always in the foreground.

It’s true content for top level decision-makers will need direct wording, forceful declarations and an emphatic sense of authority – yet those aren’t qualities that can just be assumed.

Striking a chord with the reader requires more than technical execution and strategic word choice, as important as those are in their own right. Think of those sentences as the scaffolding to the pillar of thought leadership you build in the content. Those words serve a functional purpose as the written language, but they also support that towering idea of business conducted in the highest order. It doesn’t take making a decision that has the potential to affect millions, but maybe only imagining how things look from so far up.

Voice can be difficult to pin down in content: How else would anyone speak, if not in the natural way they do? The true test of mettle then, is in the will to imagine out of the comfort zone. When thought is given to all that lies beyond the words and in the minds of your audience, it becomes easier to align your process and your voice with theirs, and also an art to master