Most of us, being human beings and all, spend an inordinate amount of time just trying to fit in.

Unless you’re a member of a royal family, or, say, Snidely Whiplash, part of your daily MO is to assimilate in some shape or form.

Sure, there are exceptions and limits – perhaps you fancy yourself an iconoclast who doesn’t care what other people think – but generally speaking, humans are motivated at least in part by a desire to be liked by other humans, and we approach our social and professional activities accordingly.

Take that title statement, for example. You might “tawk” to somebody from New York or Philly or Baltimore that way, but you would just “talk” to someone from South Dakota, because you don’t want to be mistaken for a dunderheaded moron.

This notion is central to the theory of communication accommodation, first posited by Howard Giles, a linguistics professor at UC Santa Barbara in the early 1970s. Giles initially focused on speech accommodation, and while modern research has expanded to cover the many physical and emotional manifestations of the theory, it’s the language portion that applies most directly to marketers whose goals include crystallizing their company’s brand and voice perception.

Communication accommodation, in a nutshell, means you convey your messages in a manner deemed most relatable to your audience.

That applies across mediums, whether through voice, language, text, visuals or some combination therein. Unless you’re being intentionally divisive, you probably want to ingratiate yourselves with that audience, and modifying your tone, style and choice of words helps achieve that goal by way of bridging perceived gaps, reconciling potential differences and minimizing any feelings of discomfort.

It’s a driving, often subconscious factor that can involve the manipulation of cadence, phrasing, enunciation and even volume, and helps explain any number of curious communicative developments, from politicians adopting a local twang at a campaign rally to teachers subtly inserting slang into a lesson so their students might pay better attention.

The tactic can be received positively, like when Wayne Brady adopted a more traditionally articulate persona to placate that police officer who pulled him and Dave Chappelle over.

But when an accommodation attempt feels too contrived or unnatural, it can have, uh, mixed effects.

An unwillingness to accommodate can be equally calamitous, if occasionally hilarious.

As a business, whether your audience is exclusively consumers, other businesses or some mix of the two, it’s important to ask yourselves a few questions before making concerted efforts to shift tone in content. Specifically:

As discussed previously, there’s a fine line when it comes to navigating edginess and remaining reputable. An attempt to speak the language of a particular demographic can fall flat if it’s perceived as trying too hard. It might be alright for Under Armour or Old Spice to narrow their focus with alternately meaty and kitschy pitches, but that probably won’t work as well for a software company trying to garner new leads or wade into untapped industries.

Rather than looking to overhaul your brand image, a more pragmatic focus might be on the language used in your content. Be it in blogs, email marketing material or corporate videos, word choice matters.

For example, using industry acronyms for home loan products (i.e., “QM” or “MIP”) makes sense in content targeting brokers or other industry professionals, but not for the average prospective homebuyer. For the latter, you’re better off simplifying things in a “what would you want to know” fashion – perhaps with a fifth-grade-reading-level listicle or 60-second video – rather than risk bouncing them off the page with weighty jargon.

Think of it as an effort at catering to content-consumption preferences, rather than simply dumbing things down. Each endeavor has its own goals, and achieving them means accommodating the habits of your reader (or viewer, listener, referral, etc.).

Treat your different audiences fairly, but not the same

Do you interact with every individual you meet in exactly the same manner? Same tone of voice, same inflection, same accent, same choice of words? If you’re saying yes, you’re either an honest robot or a human liar.

Inc. Magazine’s examination of the biggest trends in content marketing for 2018 identified audience experience as a foremost priority for creators in the current year. But what does that mean, exactly?

It means we need to consider that at different steps in the customer journey, different choices in tone and presentation should be explored, and when appropriate, employed. Your eBook reader might be different from your video testimonial viewer, and the guy who forwards the email blasts you’re crafting may not actually be taking the time to absorb the thinkpiece blogs they link to – but his co-worker with a clear schedule this afternoon is. 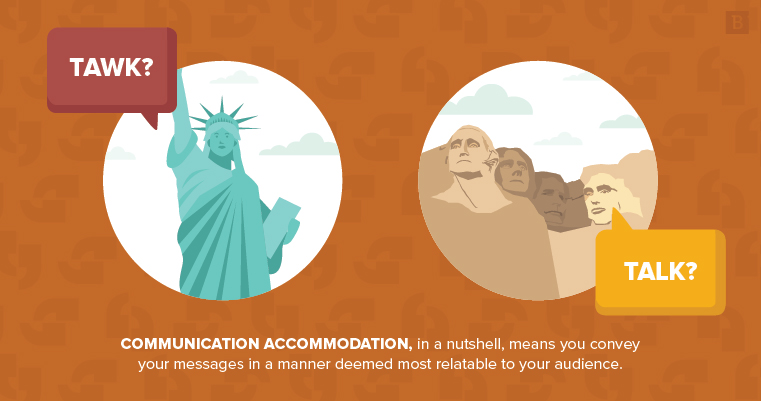 Landing on the appropriate approach for each of those people isn’t easy, but if you know that one is a business development executive and another is a marketing assistant, you can at least begin by speaking their respective languages. And in that case, you can think of each different content type as a separate conversation, just as you might with different members of your own workplace or social circle.

After all, would you break the news of, say, a career change in exactly the same manner to people who might receive it quite differently? Unlikely.

To your domineering, old-school father, you might state via well-structured email:

“I have decided to make a change for the sake of my professional development and in the interest of achieving an optimal work/life balance. Any short-term hardship should be offset by the long-term potential of the fledgling company, which is buoyed by significant venture capital funding, setting my career path on an upwardly mobile trajectory. I’ve also allotted a budgeting cushion to mitigate any financial hurdles related to the change in compensation.”

But to your boys, in person, you gesture wildly and drop gerund-Gs like pennies at a wishing well:

“Yeah yo I’m finna’ switch jobs cuz I can’t staaaaand that place. Manager’s breath stay kickin’ and he be stressin’ about me workin’ from home on Fridays or wearin’ these new Js into the office so I’m out. I got like 30 Gs in the bank, these startup fools gon’ let me bring my pup to the spot and they got craft brews on tap so I’m like f*$% it, I’mma take that pay cut and get my work-life balance on, dunnnn.”

Maybe those approaches feel extreme, or even a little pretentious. But in the end, if both parties are satisfied, that’s what matters, right? Same goes in the content marketing world, where having your message understood and received in a positive manner is the ultimate goal – whatever accommodations necessary.