Who could’ve guessed generations raised on Saturday morning cartoons would respond so favorably to marketing animation?

But animated videos don’t just tug at the nostalgic heart strings of consumers – they drive them to take action.

While animation can be used for numerous content marketing efforts, it’s often synonymous with explainer videos. These clips help break down complicated subjects into easy-to-understand concepts, relying on visuals to translate ideas.

“In a sense, an animator breathes life into designs to make them even more engaging for viewers,” said Evelin Garza Luna, Lead Motion Graphics Designer at Brafton. “Since everything is created from scratch, an animator can make anything happen if they put their mind to it. Animations also help make complex ideas more digestible and can even show step by step how to do things. Rather than sitting down and reading about something or seeing a static graphic, viewers can simply hit the play button and see it all unfold before their eyes.”

It’s that concept of bringing any idea to life that truly sets animation apart from other types of video marketing. Live action video is limited by the confines of our physical world (not to mention budgets for actors and computer graphics enhancement). Animation doesn’t have the same boundaries.

Of course, getting it right takes far more than a love for reruns of “The Flintstones.” 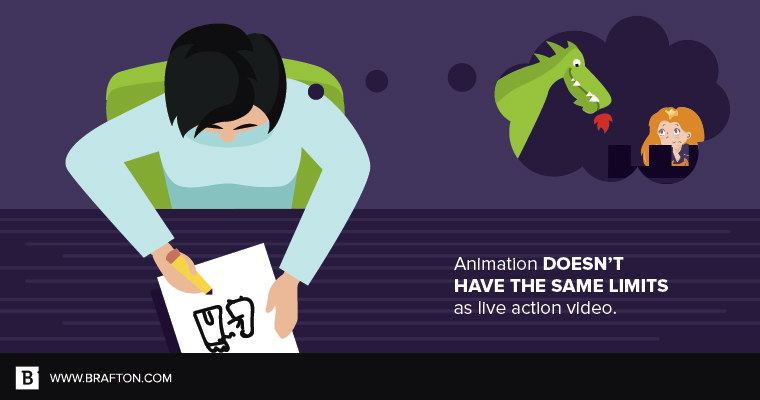 As with other types of visual marketing, animation typically requires collaboration between editorial and design departments.

Animators need a map to follow, and script writers act as cartographers.

“Writing an animation script differs from blog posts,” said Brafton Animation Producer Connor McGann. “It’s the ultimate exercise in ‘kill your darlings,’ in that you’re constantly cutting parts of scripts to ensure they remain engaging. The goal is to write as much as you can in the fewest words possible, while keeping in mind some sort of visual narrative.

And it’s much different from live video as well. Live video scripts are more literal; they depict people and things that you come across in real life. However, animations illustrate abstract topics and processes. That gives you a lot more freedom, I think, to get creative and say whatever you want.”

Connor begins by collecting brand guidelines, artistic preferences and audience insight from the client. After a topic has been selected, he writes the script and submits it for review.

Animators like Evelin work with Connor every step of the way, examining client-provided logos, fonts, color schemes, photographs and vectors.

“Once we’re ready to start, we begin by brainstorming either slide by slide or the entire script with visual notes or rough sketches,” she said. “One thing that helps is to visualize how the scenes will transition in the actual animation. Lastly, we create the storyboard by designing vector icons, characters and scenes that accompany a specific portion of the script.”

After a storyboard is approved, a voiceover artist is brought in to bring the script’s words to life.

Outside the box, inside the lines

Animators are only bound by their imaginations (and the wishes of their clients), but that doesn’t mean there aren’t general best practices to keep in mind.

For instance, it’s vital that script writers and animators work together to ensure tight, streamlined productions.

“Even if a voiceover goes a few seconds over what we planned, that can be hours of additional work for the animator,” Connor said. “So five or 10 extra words can mean we lose hours of work, and by extension, cash. Helping clients understand the importance of wordcount is crucial.”

Meanwhile, Evelin highlighted the importance of a narrative structure viewers can relate to, as well as matching tone of voice to subject matter.

“By default, it’s good to introduce a problem, and how the client can bring a solution,” she said. “In addition to this, the one element that will bring a script to the next level is the tone of voice a writer can bring. Depending on the aim of the animation and what industry it’s created for, a script might need to be more technical and to the point or follow a more narrative path. In the end, it comes down to writing something that will fit that specific project rather than following a strict set of guidelines.”

The days of chomping on cereal in your Underoos while watching “ThunderCats” may be over (mine aren’t, but that’s a whole other article), yet consumers still respond to the wonder inherent in animation.

If you’re not making use of this content marketing tool, it’s time to go back to the drawing board – literally.