Micro content is written copy, imagery and/or video content that can be consumed in 10-30 seconds or less.

Had this post closed at “The end,” it would have qualified as microcontent. But you can’t use microcontent to explain micro content because it leaves too many unanswered questions. For example:

Micro content conveys shreds of information that answer a specific question or leave an impression on the audience in a short period of time, which is entirely necessary for today’s audiences.

The average reader’s attention span is 8 seconds, which is worse than a goldfish’s. That means we lost a lot of people’s’ attention at “Let’s start …” It also means our interpretation of 10-30 seconds is a bit generous compared to some.

With that in mind, all of the below count as micro content:

Google’s Featured Snippets are another great (albeit more involved) example of micro content: 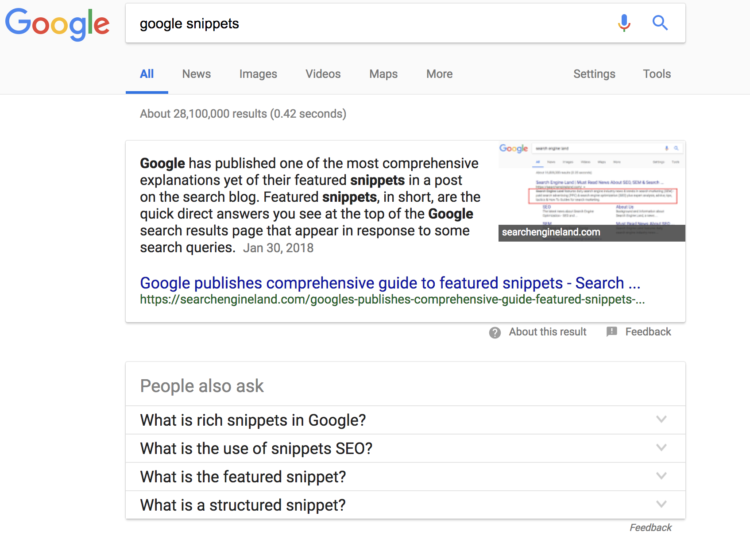 The snippet above was pulled from a 500-word article. The average adult reads at about 300 words-per-minute, meaning the original article definitely isn’t micro content. The snippet counts, though.

In fact, it’s a particularly effective example of micro content at work. It’s short and sweet, but it leaves you wanting more, in this case by teasing “the most comprehensive explanation yet …”

And that’s why you need micro content. It solves a specific problem or answers a question for your target audience in a very short amount of space. This demonstrates the value of what you have to say, ergo increasing the chances that someone will consume your long-form content, click on your website in a list of SERPs, read past your email subject line or just generally continue coming back to you as a source of useful and trustworthy information.

In this way, micro content is a great way to lead your audience deeper into the funnel with the short-term goal of helping them learn about your products/services and the long-term goal of closing deals.

Some pedantry for those who care: Micro content and short-form content can overlap, but they’re not necessarily one in the same. Short-form content might refer to a 500-word blog post that attempts to distill a 4,000-word worthy topic (e.g., string theory) down to something relatively scannable. Answering the query “who founded string theory” in 50 words, on the other hand, is micro content. (Standing alone, this explanation is also micro content.)

Micro content is the life of the party on social media.

In a lot of ways, a Facebook or Twitter feed is a microcosm of how the internet works. It’s a continuous, ever-compounding stream of information that never stops flowing. Content that users actually take the time to engage with needs to have a hook, something to lure digital denizens away from the web’s din.

Queue micro ntent. Brands can use various micro content mediums on social media to get their audience’s attention. These formats include:

Here’s an appetizing example on Instagram, courtesy of Ben & Jerry’s:

Micro content such as this helps cultivate an interested base of followers who care what you have to say. Once you get your audience’s attention on social media, you start a conversation that will hopefully develop into a fruitful business relationship.

Micro content can also be used on social media to help promote larger assets. Maybe you’ve recently written and formatted a compelling customer case study complete with photos. Post one of the more engaging pictures on Instagram and link to the full downloadable asset. This method is just as effective on Facebook, Twitter or LinkedIn.

Another creative strategy is to use micro video, which is exactly what it sounds like (micro content in video format). Keeping these to 10 second snippets or less makes it a little easier for a user to pause and hear what you have to say as they mercilessly scroll through their feeds.

These videos can be standalone content, like the Ben & Jerry’s clip above, that are intended to boost impressions (number of people who see a post). They could also be short versions of a longer video that aim to lure a user into taking a certain action (boosting click-through rates) – like this very meta example of Cannes Lions advertising its advertising awards festival:

The LinkedIn user, on the other hand, is on the prowl for something nice and meaty to chew on. According to the Content Marketing Institute, long-form content is shared more than quick-hitting posts on the professional networking platform. How long are we talking? 1,000 to 3,000 words appears to be the sweet spot.

If your plan was to wow your LinkedIn connections with some terse wisdom, we recommend repurposing that micro content for Twitter and bringing in the big guns instead.

We already explained that a video can be cut down into a short version to generate buzz on social media. Likewise, a blog post can be repurposed as micocontent by extracting the digestible bits and using them in tweets, Facebook posts, etc.

These little nuggets of information lend especially well to the concept of “micro learning,” which is basically just providing learning materials in small doses. Maybe every Monday you post a particularly useful tidbit of information (perhaps a paragraph) from one of the prior week’s blog posts. 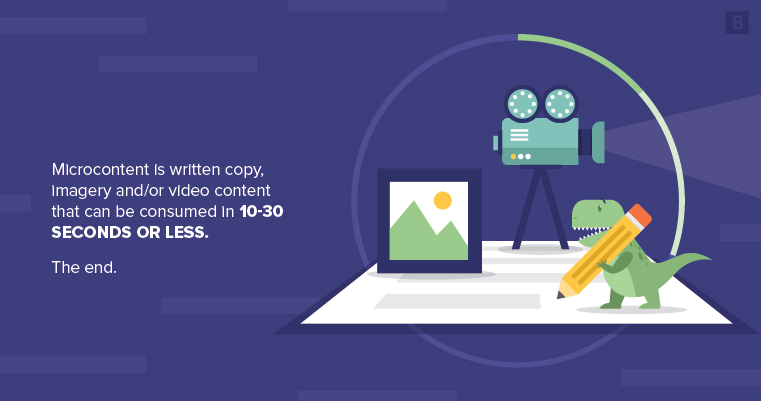 You could also do the same with FAQ content. Promote a comprehensive new informational FAQ piece on Twitter by posting one question and answer every day on the week of its release. Your audience will appreciate the free content and may even be intrigued enough to download the full asset or start a conversation about what your brand can do for them.

In this way, micro content is really just bait for your deeper-funnel assets, or perhaps the appetizer for the main-course content. And you never know. Sometimes it becomes more than that. I frequent at least one dining establishment primarily for the appetizer (blooming onions from Outback, anyone?).

The point is that micro content plays an important role in your content marketing strategy. It’s that crucial first step to forging a relationship with your target audience in which both parties will eventually live happily ever after.

For real this time: The end.

A Marketer’s Guide to Creating Evergreen Content That Lasts (Infographic)

Learn how to spruce up your marketing with evergreen content that provides value to your target audience for years to come.