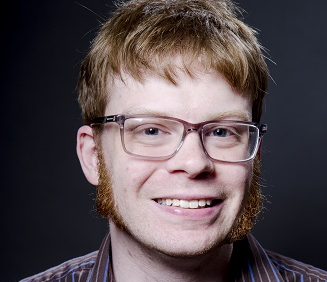 We think of Tony as one of Brafton’s greatest not-so-secret weapons – not only because he is consistently one of the most organized, proficient editors – but his passion for writing and editing makes him really stand out from the crowd.

“I’ve wanted to write since I was very small, it’s one of my favorite pastimes. Finding work that involved writing was a huge priority for me,” he said.

When Tony started at Brafton in 2012, keywords for SEO and bite-sized news articles were his focus. Now that marketers have realized that longer, in-depth content has a stronger impact, Tony’s job has become more exciting, too.

“Brafton’s writers are from college lit backgrounds, so they’re pretty great prose stylists when you give them interesting topics and space to write,” Tony said. “Every change at Brafton and in the industry has let them get better. I’ve been editing and it’s been great to see.”

Tony’s creative writing juices don’t stop flowing when he leaves the office, though. He’s the wordsmith behind his band, Aqua Hamster’s lyrics. They started playing for friends more than three years ago, but recently ventured into the exciting world of real, professional shows.

“Aqua Hamster is a huge thrill for me. The key about having an after-work creative project is keeping a good frame of mind and thinking of things that go on in the day as chances to think creatively build momentum rather than get tired and lose it,” he said. “After any job it’s so easy to just relax on the couch, but if you’re gonna write songs, you’ve gotta defer couch time a little while and use the time-management skills picked up at the desk.”

I wanted to play baseball, I was a fanatic for the game. I grew up scrawny and decided I would work for the Sox instead of play for them, so I held onto the dream for quite some time.

Success to me is all about discipline and continuing to show up and put in good work when others would fade. Being the one who is ready to help and willing to do what’s gotta be done is a way to show leaders that you’re worth having on hand. Being naturally

good at something is cool when it happens, but showing up is non-negotiable.

I like a sense of progress, goals and targets. At Brafton, my volume log is my favorite tool. Filling in what I’ve done and planning out what’s next gives me a sense that I’m in control and I’ll deliver on my promises for that month, and that’s a great feeling.

My guitar, a discontinued model from the sixties called a Harmony Rocket. They discontinued it in 1972 (presumably because it was so… good?) While my friends and I were putting Aqua Hamster together, I wanted to get a really high-quality guitar that I could use for years and years. My parents paid for it when they saw I was serious about getting going with the band (they want me to do creative stuff). The fact that I have it means I’ve gotta keep trying, ’cause Mom and Pop believe I can do it.

Any day of the month is more productive for me near the beginning of the month. I front-load the calendar to avoid nasty surprises late in the month. The fact that editing words is the crux of my role is really exciting for me, as I’ve always had an affinity for them. The fact that I can actually use that talent feels like a gift.

Career-wise, going from a job at the last Border’s in MA (it was like serving lattes on the Titanic) to where I am now is something I treasure.

In a personal sense, I set a new benchmark every time a promoter expresses interest in Aqua Hamster.

I was an award-winning poet in kindergarten, grade 3 and grade 5, then got out of the

game while I was still on top.

I’d like to think that I am the Brafton equivalent of Liz Lemon. I want to please everyone, get things done and make Star Wars references, and these needs can pull in opposite directions.

Want to learn more about our editorial teams? Check out…