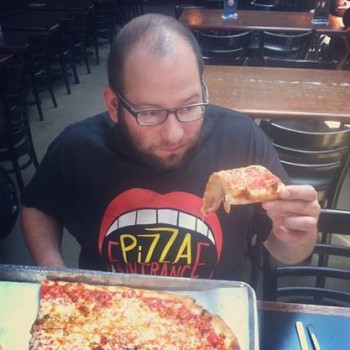 He’s a pro baker – known for surprising his teammates with goodies on birthdays and Braftiveraries. And much to his teammates in Boston’s delight, he’s a die-hard New England Patriots fan – with collectables and trinkets neatly aligned on his desk.

What makes Perry a great employee runs stronger than his love of football and sweets, though. His ability to master intricate topics in a flash is unparalleled, according to his editor, Ashley Greene. And his organizational skills are so meticulous, she said it’s hard for him to not be on his A game.

“Watching him take in new, complex information and then put it to use in his writing almost immediately makes you wonder whether anything is actually hard for Perry,” Ashley said. “He jumped into the Brafton groove right away, and has continued to impress his editors and clients with how quickly he adapts to new situations and confidently takes on new responsibilities.”

For Perry, it’s all about investigating the topic he’s undertaking to make sure he fully understands it.

“I just ask a lot of questions and make sure I get an answer one way or another, whether from the client or online,” he said. “I like when current events and news can play a part in the content. One of my clients focuses on corporate asset and personnel security as well as duty of care for business travelers, so a lot of the writing is focused on disasters and near misses, which is interesting to me.”

Learn more about Perry in our Brafton Q&A:

“Watching him take in new, complex information and then put it to use in his writing almost immediately makes you wonder whether anything is actually hard for Perry.”

A pro wrestler, mostly. I liked that you could get paid to make people mad.

Taking responsibility for what you need to do. It’s simple but it means you’re paying attention and being proactive.

Being able to do some different things every day. We’re pretty structured here but there’s still some room to do new and different things, which makes doing the more repetitive stuff less of a chore. I have a Patriots shrine in my apartment that has some pretty good memorabilia included, like a 1989 Steve Grogan Starting Lineup toy and this issue of Sports Illustrated. There’s also a ceremonial Bhutanese dagger and mask, sea shells from Cape Cod, Mardi Gras beads and a vuvuzela, anything that will bring good luck.

When I get to learn something new or find out something I otherwise would have no idea about.

I helped coach a youth football team to a playoff win back when I lived in Connecticut.

I can vibrate my eardrums. No one can tell when you do it, so it’s pointless and literally hidden from everyone else.

If Brafton were The Facts of Life, I would probably be Jo, but possibly Natalie.

Want to learn more about our Chicago editorial teams? Check out: