Are you there, Brafton? It’s me, Dominick Sorrentino | Brafton

It all started with God. Or was it dog? No, it was definitely God, at least the way Dominick Sorrentino tells it.

“I went to a Catholic Pre-K, and the class was trying to spell ‘God’ one day,” said Dom, a Senior Writer at Brafton and the Chicago office’s go-to source for all things tech. “I pointed out that ‘God’ written backwards spells ‘dog,’ which totally impressed my teacher. Other kids were still learning the alphabet, and here I was spelling words backwards.”

Not all of us get a hint of our calling at such a young age – or in such a divine setting, for that matter. Although his talent for wordplay kicked in early, it wasn’t until third grade that Dom realized he could be a writer.

“It wasn’t that I knew I wanted to be a storyteller or anything,” he said. “Words just clicked with me. The idea that you can solve problems with words is really cool.” 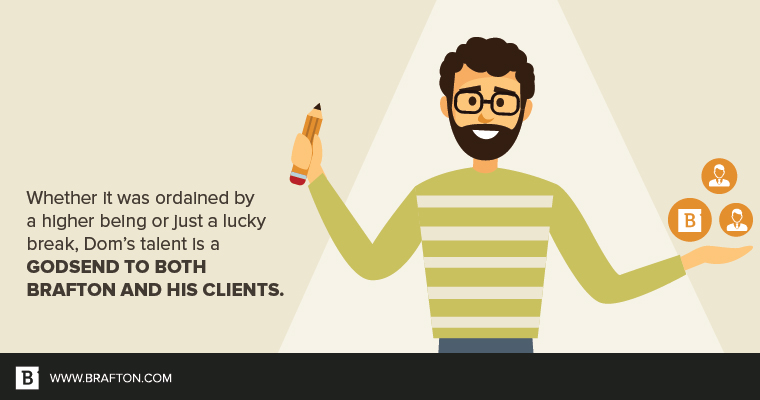 If there’s anyone good at solving problems with words, it’s Dom. A frequent receiver of client praise, his technology writing is some of the most creative content to come out of Chicago.

Whether it was ordained by a higher being or just a lucky break, Dom’s talent is a Godsend to both Brafton and his clients.

A “Life at Brafton” success story

Dom grew up in a diverse area of Connecticut; collectively, the kids at his high school spoke over 50 languages. Once he turned 18, he left to study creative writing and journalism at Emerson College in Boston, then spent time in Hawaii and New York.

In spring 2015, his girlfriend was accepted into a master’s program at Indiana University, so Dom turned his sights to the Midwest.

“I was looking for jobs here, and I had some agency experience, so that led me to Brafton,” he said.

Funnily enough, what convinced Dom to submit his application was a “Life at Brafton” article.

“I was very drawn to Matt Rickart’s post,” Dom elaborated. “I didn’t know who he was at the time; he was just this guy whose favorite color was plaid. But I liked the way he described being a writer, so I applied.”

Will Dom’s own description of the Brafton writer life live up to the fabled Matt Rickart’s? You can decide for yourself.

A match made in writer’s heaven

It’s no secret that content marketing has changed over the years. These days, writing for this industry is practically its own art form, which suits the creative-minded Dom quite nicely.

“The model makes sense for my personal and professional writing goals,” Dom explained. “It matches the kind of things I want to create and the kind of value I’d like to give to our clients. I’m motivated to create something where I’m learning, inspired and engaged.”

Like most of us in the office, Dom starts his day with a particularly large cup of coffee and a run through his inbox. He’ll then write non-stop, barring the absence of any meetings. Dom spends about an hour or two each day in conferences with Content Marketing Strategists, Project Managers and clients, typically discussing strategies and interviewing subject matter experts. He’ll also pitch topic ideas during these meetings, something he found he has a knack for.

It wasn’t that I knew I wanted to be a storyteller or anything, words just clicked with me. The idea that you can solve problems with words is really cool.

The lull hits Dom in the early afternoon, at which point he cranks up his coffee consumption.

Sometime between 3 and 4 p.m., he’ll go back to his email and finish any small, non-writing tasks. He said he’s a little drained by this point, but that’s how he likes it.

“I’d hate it if I were somewhere stagnant, looking for ways to fill my time,” Dom noted. “One thing I’ll say about the work here is that it’s always engaging. There’s always a lot to do, and it requires your best effort.”

So what does the phrase “best effort” entail? For Dom, it’s attention to detail.

“By that, I don’t just mean getting your facts straight,” he said. “It’s also sensitivity to tone and messaging. There’s so much nuance to what our clients are trying to achieve. If we act as their voice, we need to be aware of that fact and tuned into their mission and goals.”

Of course, Dom isn’t all work and no play.

He relaxes in his spare time by finger picking his acoustic guitar and biking around the streets of Chicago. Plus, he’s got a fierce love of learning about any little thing that piques his interest.

I’m motivated to create something where I’m learning, inspired and engaged.

Remember that creativity from before? That comes from Dom’s vast reservoir of knowledge of pop culture, science, film, music, history and technology. During our chat, he brought up the world’s first e-commerce transaction: a drug deal between students at MIT and Stanford. Who knew a bit of marijuana would lead to Jeff Bezos and Amazon?

He also talked a bit about Brian Greene’s writing on superstring theory and why virtual reality will change video games.

If only Dom’s pre-kindergarten teacher could see him now.