Plenty of musical prodigies were born and bred in Minnesota. However, not all virtuosos hailing from the Land of 10,000 Lakes can boast working at Brafton.

Hint: I’m not talking about Prince (God rest his soul).

No, I’m referring to one Courtney Meyer, graphic designer extraordinaire. Long before she was crafting eye-catching custom images and making infographics sing, she was leading marching bands. 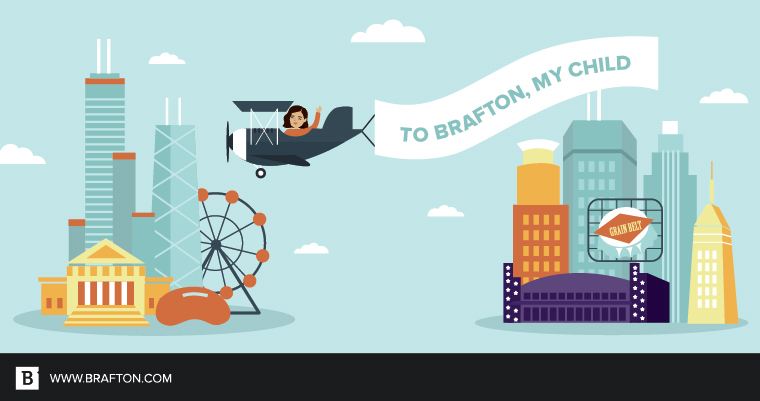 The sound of music

Born in Edina, Minnesota, but raised nearby in Farmington, Courtney discovered a love for music at a young age.

“I did everything band-related I could,” she said. “Jazz band, marching band – I was the drum major. Everyone used to make fun of me because I was so short. They would say, ‘Courtney, we can’t see you.’”

She may have been small in stature, but the mighty sound of music ran in Courtney’s blood.

“Both my parents were musicians,” she said. “My brother was into music. But my parents didn’t really want us to get into that as a career, because it wasn’t profitable.”

So Courtney headed off to the University of Minnesota, a song in her heart but undecided what career path she might take. While she enjoyed drawing growing up, she didn’t come to graphic design until her second semester of her freshman year in college.

“I had to teach myself everything,” Courtney remembered. “They teach you the basics, but you’re basically on your own for learning all the programs. I found out pretty quickly that I liked to draw.”

Graduating in December 2015, Courtney began to look around for what was next. Lots of interviews and potential internships followed, but none stuck. Then, the stars aligned and the graphics gods spoke thusly: “To Brafton, my child.”

The face of Brafton

Courtney learned the ropes of agency life her first few months at Brafton, working on a handful of smaller clients. However, it wasn’t long before she got called to the majors.

Brafton’s official website was in need of a designer, and Courtney’s employer suddenly became her newest client. She is now responsible for all the visual marketing attached to the Brafton brand, making her designs the face of Brafton for prospective customers.

While she still helps out with other clients, Courtney estimated 90 percent of her work is strictly Brafton-related. That means she’s responsible for any and all Brafton design work, from custom feature images for Brafton blog posts and infographics to formatting for eBooks and white papers. PowerPoint presentations used by Brafton’s CEO? Yep, that’s her. Design for email newsletters? Her again.

It’s no surprise then that she cited time management as her No. 1 challenge.

“There’s so much to do,” she said. “Being able to produce quality work in such a tight turnaround – it’s difficult.”

Art may imitate life, but life informs art. The speed at which Courtney must work helped dictate the style of Brafton-branded graphics. Along with the company’s color schemes and existing design guidelines, Courtney was responsible for creating an art style that was simple yet instantly recognizable.

Still, just because she makes it look effortless doesn’t mean it is.

“Most people don’t know how much work goes into it,” she said. “How much effort and time it takes. You get the project, you start with your ideation, mind mapping where things are going to go, then pen-and-paper sketching, determining how you want it to look in terms of layout, going to the next stage of putting it together. And that’s all before you go digital.”

Courtney is more aware than most of how essential graphic design is to successful content marketing. She also knows its importance will only continue to grow.

“Graphic design is absolutely necessary today,” she said. “There are people that will use some online resource to pay $5 for a logo or something, and that’s really unfortunate. Quality is becoming more important. People will learn the hard way it’s an actual profession and quality costs more.”

With stock images dying a well-deserved death, and internet users being bombarded with content from all corners of the web, it’s vital for quality visuals to shine through, differentiating valuable content from the digital detritus. And it’s a challenge Courtney is more than up to.

Besides caffeine, Brafton’s graphic designer and drum major hybrid is powered by the support of her colleagues. Asked what her favorite part of working at Brafton is, she didn’t miss a beat.

“The people,” she said. “Lauren [Monaco, Brafton Lead Designer] is wonderful. Everyone I’ve worked with has been super supportive, even people in Boston who I’ve never even physically seen in real life.”

And for the other budding artists around us? What advice did Courtney have for those looking to break into visual marketing?

“Find out what you like to do, what you’re best at, and cater to it,” she said. “I think a lot of the time, people try to do so many different things … Cater to what you’re good at and showcase it. Show what you do best and wow people.”

Sage advice. The Purple One would be proud.

As Brafton’s creative director of video, Ian Servin knows how powerful a problem-solving tool video can really be. Read more about his views and advice on creating video content.