With roughly six years at Brafton, Dave Snyder is a veritable old-timer, watching our business mature from a digital media upstart to a formidable content marketing leader.

That experience has paid off handsomely – not just for Dave, but for all of Brafton. As the Assistant Director of Project Management, Dave lends his writing, editing and content marketing knowhow to anyone who needs it, including writers, designers and project managers grappling with tricky client requests and high subject-matter expertise demands.

How did he get here? Let’s take a look at Dave’s road to the Brafton Hall of Fame:

A writer (and teacher) is born

Dave knew at an early age what he wanted to do in life: write. That passion for the written word led Dave to major in English at NYU before pursuing an MFA in Creative Writing at Boston’s Emerson College.

While getting his masters, he worked part-time tutoring students and helping them write admissions essays, prepare for law school or study for the SATs – whatever assistance they needed, Dave was there to lend a helping hand.

“I’ve always been drawn to teaching,” said Dave. “I really enjoyed working closely with students to find solutions to whatever issues they were dealing with.”

That drive to teach would have to wait, though, as Dave sought out a post-academic career path that would allow him to write for a living. That’s when he found Brafton, answering a call for writers in our Boston office.

Those early, heady days at Brafton

He started out (as many of us do) as a News & Content Writer, quickly earning praise from colleagues and clients alike for his sharp prose and ability to handle difficult subject matters and discerning editorial eyes. It wasn’t long before Dave transitioned to a Senior Writer role on the Business & Technology team – or Bizology, as it was fondly referred to.

Later, Dave took up the mantle of Head Writer for the Bizology team. For those who don’t know, “Head Writer” is an incredibly prestigious role, reserved only for the upper crust – the very best writers who could stand up to the scrutiny of the most demanding clients. To date, the only other Brafton employees to hold this position were Nick Kakolowski and Chicago’s Alex Cox, who are legends in their own right. Not even Devin Schiff holds the distinction of being a Head Writer. We’re talking Bird and Magic, M.J. and Shaq, Lebron and Kobe levels here, people. 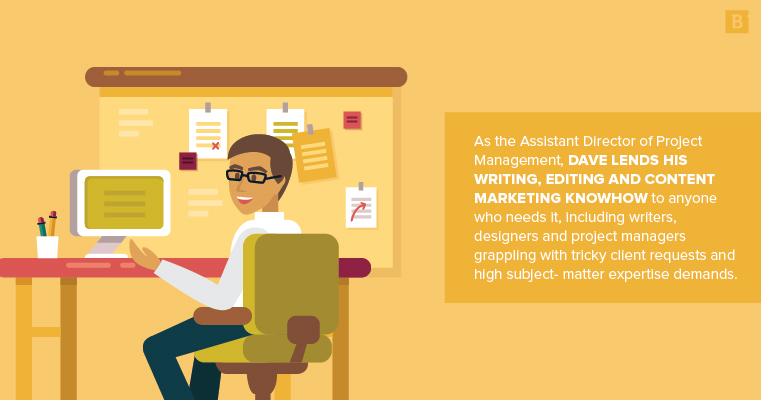 That knack for pleasing demanding clients and surpassing challenging SME expectations gave Dave a reputation as a “fixer” of sorts. Everyone knew, you had a rocky account in dire need of a course correction, you bring in Snyder. He was a natural first-round selection for what was then known as the Specialist Editor team, whose mission would be to put out fires, stabilize accounts and get content marketing campaigns back on track.

The Specialist Editor team never really came to fruition, though. Instead, it evolved into something much greater: Brafton’s Project Management department. Dave was right there on the ground floor for the dawning of a new era in Brafton history.

Working as a project manager really taps into Dave’s afinety for problem solving – and as in any fast-paced, competitive industry, there’s no shortage of problems that need solving.

On top of that, being a member of the Project Management team gave him a chance to work more closely with other teams, from Video and Design to Account Management, Social Media and Consulting.

“I was really excited about the opportunity to work with more people across different departments, Dave said.

As a project manager, Dave quickly proved himself to be a triple threat: meticulously detailed, deeply insightful and warm and engaging with clients. It wasn’t long before he was tapped to lead the entire team.

As the Assistant Director of Project Management, he’s found the perfect role to combine his unparalleled editorial chops, love of problem-solving and passion for teaching. His duties involve being a mentor of sorts for other project managers, helping them navigate problems much in the same way he did back as a tutor at Emerson.

I really like working with everyone on an individual basis and helping them overcome challenges they come across, talk through those problems and grapple with those more difficult accounts.

What does he love most of all about working at Brafton? The people, of course.

“Our project management team’s great,” he says. “I really like working with everyone on an individual basis and helping them overcome challenges they come across, talk through those problems and grapple with those more difficult accounts.”

Don’t think Dave’s forgotten about his original love, either. He still finds time away from Brafton to work on his passion projects, whether he’s writing short stories, screenplays or even a full-fledged novel.

Here’s hoping Brafton can benefit from Dave’s presence a little while longer before he’s crawling up The New York Times’ Best Sellers list. Where would we be without him?