Whether or not you know what an architecting developer is, chances are that you have enjoyed the products of these clever minds. This is especially true when it comes to working with Brett Jenkins, Senior Architecting Developer for Brafton’s Development Team.

Brett obviously makes our web development top-notch, but as with the other personalities that populate Brafton’s widespread talent pool, there’s so much to know about him beyond his job title. So let’s learn a little more about our Senior Architecting Developer:

Working from Hereford, U.K., Brett has quickly become an essential part of the Development Team in the 18 months since he was first hired by Brafton. But Brett was busy perfecting his skills as a web developer well before connecting with us.

Though he began his career in development right after he left university in 2010, his interest in software and web design began many years earlier. According to Brett, “I first started programming when I was around 11 or 12 and was largely self-taught for a long time.”

When his professional career began, he worked many different web development jobs. As such, Brett’s knowledge extends from basic web dev to content management system creation, including software for important systems for enterprises, health care providers, charities and government agencies. He also has experience working on financial software that’s used to manage millions of dollars of investments for investment banking companies.

Brett described one of his most proud moments pre-Brafton as “being the lead developer for a social careers guidance website for a major educational publisher.” In addition, he gained extra experience at a previous employer by being responsible for pitching and then implementing Continuous Development.

Then, a recruiter reached out to Brett and presented a job opportunity at Brafton, which he snapped up excitedly. Since he began flexing his skills here, he’s racked up quite the list of successes that have strengthened his overall professional growth. For example, he was part of the team that launched the first installment of the Brafton Content Marketing Platform, which is a major boon for our agency’s clients. To put it simply, it’s a smart marketing software tool that is used to plan, produce and measure the performance of critical projects through one straightforward, user-friendly interface. What an accomplishment!

Brett also contributed to the implementation of WebSockets within the client platform. Without delving too deeply into web developer jargon, this addition enables clients to communicate with our server and connect with the Brafton team more quickly and efficiently.

From Tech to the Flight Deck

When on the clock, Brett works hard to contribute his experience and knowledge to the web development team. But while he pursues many personal interests after punching out, he often finds his mind preoccupied with finding the best uses for the technology. This includes a fascination with home automation, which you might have heard called “smart home technology.” Brett has already automated a few things around his house, including the lights and curtains.

As a pilot and air traffic controller, Brett loves flight simulation and he is active on the Virtual Air Traffic Simulation Network (VATSIM) network. Aside from his personal interest in technology, Brett also dips his toes in the arts, specifically music. Even though he only plays piano from time to time, he plans on making time to extend his musical education. In the meantime, Brett says that he and his partner enjoy going to see musicals, with Hamilton and the Phantom of the Opera being some of their favorites.

While he keeps quite busy as a man of many talents and interests, Brett does take some time to relax every so often with his pets. He has two cats named Basil and Polly.

According to Brett, “Basil loves going on walks with me around the local fields, and Polly loves jumping on our laps for attention, and keeps trying to steal food off our plates!”

With a nice balance between work and life, Brett has enjoyed his first year and a half at Brafton. He says that even though the team he works with is international, they all have a lot in common, and the team’s quick adoption of new tech keeps him happy.

Next time you work with Brafton-made software, know that Brett’s work is somewhere in there! 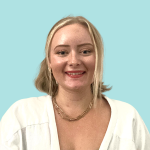 Brafton Director of Customer Experience Kayleigh Kent has a go-go-go attitude when meeting her clients’ needs. This is key to her success at Brafton.

Walking the Line With Dewey MacMillen

Explore what a day in the life of super performer Dewey MacMillen looks like — and be careful not to fall off your seat!