There’s no denying it: the City of Brotherly Love is an incubator for talent.

Among Philadelphia’s favored sons and daughters are Ahmir “Questlove” Thompson, Bill “El Wingador” Simmons and John “The Cool Ghoul” Zacherle, to name but a few.

From the court to the booth to the field

It’s a cliche that all boys want to be professional athletes when they grow up. Then again, most cliches are true.

From a young age, Andy had his sights set on professional basketball.

“But then I realized I was a short white dude who couldn’t shoot,” he said. “For a little while I wanted to be a play-by-play guy, an announcer, so I would go to the park and would call my own games by myself if my brother and friends weren’t around to join me.”

A regular Dick Vitale, was our boy Andy.

He considered chasing his passion for sports broadcasting at Beloit College in Wisconsin, but realized he’d developed a taste for the written word.

“The broadcast element I fell out of love with,” he said. “For whatever reason, I got more into writing. You couldn’t major in journalism at Beloit, only minor, and there was a heavy emphasis on the production side of things for broadcasting, so I leaned toward creative writing and nonfiction.”

Graduating with a communications degree in hand, Andy was greeted by a swift kick in the rear in the form of the Great Recession.

“I graduated right when the economy hit rock bottom,” he remembered. “I went back to Philly and lived with my parents for six months, and got a job at a sports website wire service. It was good experience with deadlines and working in a newsroom environment. I did some interviews, worked with stringers who were at the games to get quotes for the stories.”

But Chicago was calling, and soon enough he made his move to the Windy City with a job at a publishing company.

“It was the worst job I’ve ever had, and I’ve worked at a concession stand in Philadelphia,” Andy said. “I mean, I’ve had to chase people down who stole soft pretzels from me.”

Soon enough, however, his passion for athletics came in handy. Our man had been laid off.

“Without a whole lot of ideas as to what to do next, I became a baseball coach at a private school, as well as doing some bartending,” he said. “I ended up teaching English and history to middle-schoolers while coaching the high school varsity baseball team.” 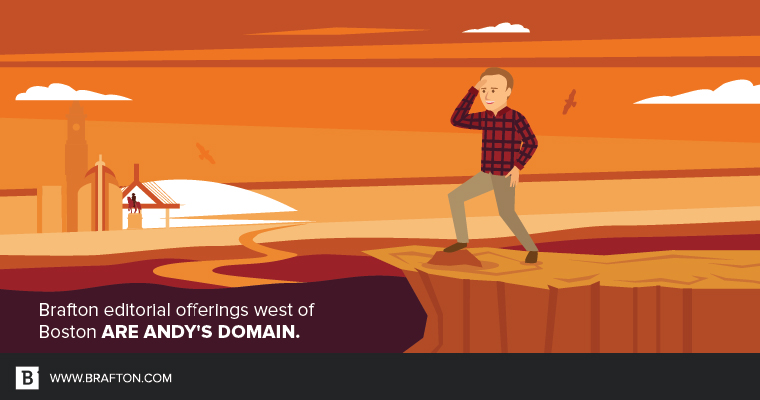 Andy found Brafton through an advertisement. He read up on the company and applied. His rise at the company has been constant ever since.

Moving up from Content Writer to Content Manager to Managing Editor in under four years, he now manages Brafton editorial offerings for clients calling the Midwest and West Coast home.

“The way I articulate my current role to clients is, I’m in charge of overseeing all Brafton accounts in Chicago, from products and delivery to coordinating with other departments,” Andy said. “That includes managing all writers and acting as a liaison between creative departments.”

I ask him to articulate his role for me instead.

“I do a lot of editing, spend a lot of time in spreadsheets and in internal meetings,” he said with a laugh.

Managerial duties. Administrative tasks. Putting out fires. Andy does it all, and always with a disarming calm that puts others at ease.

That’s not to say he doesn’t feel the squeeze now and then.

“For me, the biggest challenge is carving out time for creative tasks,” he said. “I would like to have more time for that, but finding that balance with your other duties is difficult.”

While Andy hasn’t been at Brafton as long as some, he’s seen nearly every iteration of the company’s creative departments over the years.

So what’s changed, I asked him.

“The way we look at editorial content as a piece of the puzzle instead of our bread and butter,” he answered. “It’s been a gradual evolution, but we now approach strategies with more of a campaign-oriented viewpoint. Everything is produced with a certain creative vision in mind. That vision can change from month to month or quarter to quarter, but it’s part and parcel of our strategies, which is a dramatic change from how content marketing worked a few years ago.”

“Clients are savvier now,” he said. “People are educated on what content marketing is. It used to be everyone wanted to be a ‘thought leader.’ Now it’s more about how they can leverage thought leadership, how it will help their bottom line. It’s not enough to just have an interesting take on a trend or topic.”

When he’s not corralling content writers and collaborating with clients, odds are you’ll find Andy running, or playing with his dog, or both. He also still has a soft spot for creative writing. However, he and his wife are expecting their first child, which might dampen his progress on the next Great American Novel.

“Being a dad will surely free up more time for creative writing,” he said, smiling.

Hey, changing diapers beats chasing down soft pretzel thieves in the Philadelphia heat, at any rate.