Mike O’Neill loves to learn. I realize that sounds incredibly vague, but, in the case of Mike, it’s also wholly accurate.

Maybe it has something to do with moving around so much as a child. When every year brings the prospect of being the new kid, it helps to learn as much as you can about the people and places at each stop in the journey.

Whatever the case, Mike’s passion for taking advantage of the world’s collected knowledge is equal parts inspiring and humiliating. Inspiring because duh, humiliating because I spend most of my time after work eating unhealthy food and watching trash television.

After our interview, I went out and got my first-ever library card. No joke. Mike may just be Brafton’s version of LeVar Burton. 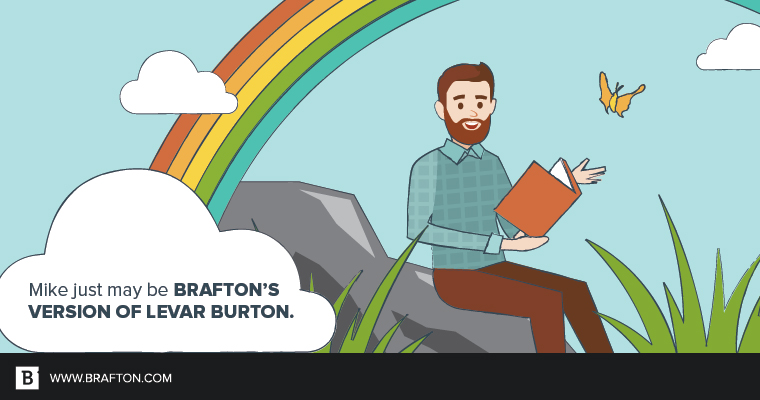 In the deep dark hills of western Kentucky

Mike sighed when I asked him where he was from. I now get why.

“Well, I was born in California, but I moved to New York, and then Tennessee, and then Missouri, and then Texas, and then Germany, and then Colorado, and then back to Texas, then went to school in Kentucky, and then Chicago,” he said.

If you hadn’t guessed, Mike’s dad was in the Army. Still, how does a California boy who spent his adolescence in Germany settle on Kentucky’s Murray State University as his future alma mater?

“I had family nearby, and my brother went there also,” he said. “And it was the school that gave me the most money to go there.”

Mike is practical if nothing else.

As a boy, he had briefly considered following in his dad’s footsteps with a military career. Of course, he also thought about being an architect, a folk singer and a professional basketball player (it must be said, Mike does resemble a Caucasian James Harden in a certain light). He hadn’t settled on a career by the time he started college, double majoring in history and political science.

“I mostly just wanted to learn about my immediate interests,” he said. “I wasn’t really planning for career advancement or finding a job.”

Upon graduation, he signed on with some college friends heading to Chicago.

“They were looking for more people to move in with them to make it as cheap as possible,” he said. “I threw in my hat as well – no job lined up, no nothing. I had enough money to last me a month.”

Mike worked multiple gigs his first two years in the Windy City, from barkeep to freelance writer. He applied at Brafton because the job posting stated he could write about a number of different industries instead of being locked into one specific style of writing. Starting as a writer in 2014, Mike found himself in a management position within the space of a year. His current position is Content Manager of Chicago’s editorial team.

While nailing down a consistent day-to-day duty roster is difficult in his current position, most of Mike’s time is spent editing content, acting as a client liaison, and generally doing everything he can to help both internal and external stakeholders kick ass.

“I’m making sure the team is following best practices, conducting workshops, making sure everyone’s up to date on the latest SEO and digital marketing methodologies,” Mike said. “My goal is to make sure we’re not just sending a bunch of text to clients, but using all the tools at our disposal to make every piece of content as effective as it can be.”

While Mike is a capable client lifeline, he said he prefers the internal focus of his role, mostly because it gives him a chance to learn more himself.

“The best way to learn is to try to teach someone,” he said. “You find in the middle of the process, there’s still stuff you don’t know yourself, or someone asks a good question. Just saying things out loud, it comes across differently. The education and learning aspect is the most enjoyable part of the job for me. I have pretty much free rein to learn anything I want to.”

“The best way to learn is to try to teach someone.”

Developing a thirst for knowledge is something Mike encourages everyone to do, especially people looking to move into a management position.

“Learn everything you can,” he said. “Don’t assume that someone at some point is going to reach out to you and choose you as their trainee and teach you everything. You have to put it on yourself to do those kinds of things. At Brafton, we’re sitting in an office all day with people from different departments who know more about things than we do, and simply asking them for a half hour of their time to explain something is free knowledge that’s right at your fingertips.”

For all his learning of new skills and marketing techniques, Mike seems convinced the future of content marketing is actually quite simple and straightforward.

“It may seem kind of silly, but I think good, natural writing is at a premium,” he said. “The more advanced Google becomes, the more it can snuff out stuffy, super technical or nonsensical language or keyword stuffing. So I think more of the traditional journalism, creative nonfiction approach of telling a good story and learning how to convey something in a way that really forces the reader to hang on to every single line will become more important.”

The man should be teaching kids on PBS, as far as I’m concerned. In the meantime, sharing his knowledge with clients and colleagues will have to do.