As a senior content marketing strategist, Darla Swango so often succeeds with her clients because she’s willing to step into their shoes and immerse herself in their culture. This lifelong determination to learn, experience and share has served her well, both personally and professionally.

But don’t get things twisted: Darla does what Darla wants when Darla wants to. This independent streak has brought her around the world — and thankfully into Brafton’s arms.

Growing up the child of a public schools superintendent, Darla moved around a lot. Her places of residence almost sound like an Illinois version of “I’ve Been Everywhere.” She’s been to Decatur, Springfield, Mount Zion, Peoria, Waukegan, and Chicago … man.

But where this story really picks up is with the one-way ticket to France Darla bought after graduating from DePaul.

Studying for six months in Paris during her senior year convinced Darla that France was where she wanted to be; and she was equally convinced that economics, which she got her degree in, was definitely not the career she wanted.

And so at 22, Darla bought a one-way ticket with wide open expectations. 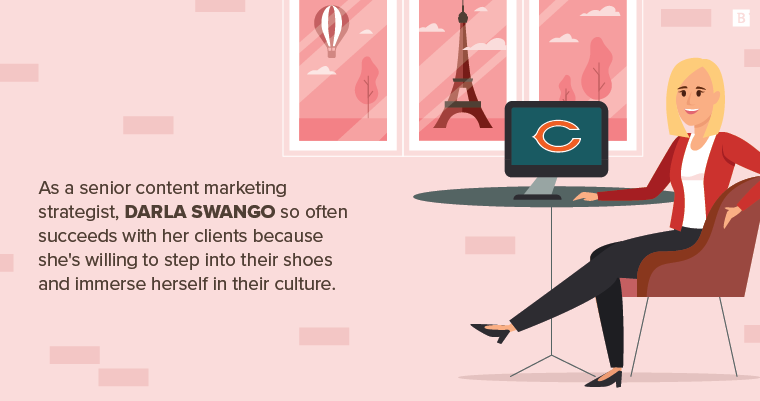 Being proficient in French was a major help, having studied the language in high school and college. After six months, she found a job helping French workers polish their English for business communication purposes. The work took her to the Nike headquarters in France and other locations where she would instruct executives and mid-level employees alike on grammar, accents and syntax. But work was work, and after 2 ½ years abroad, Darla moved back to Chicago.

France provided the base for everything after it and the mindset I carry through life.

“Living paycheck to paycheck wasn’t exactly a vacation,” Darla says, “but I wouldn’t change it for anything. France provided the base for everything after it and the mindset I carry through life.”

Bearing down in corporate sponsorship sales

The first work that Darla would find stateside was in fundraising and event organization for nonprofits and trade associations.

For about nine years she’d chase donor dollars and oversee the logistics for galas and other events, which led seamlessly into sponsorship sales jobs with the Chicago Fire and later the Chicago Bears. There, she liaised with corporations instead of donors, arranging their financial support of the team.

“We’d be behind anything you saw with a logo, whether on TV, the website, in-stadium activation or experiential marketing,” as Darla explains it.

Working for a hometown team is a dream for a sports enthusiast like Darla, and the chance to work game days and fan events was a world of fun. But the hunt for new business sales could be exhausting between working weekend and night games, months-long training camps and networking conferences outside the regular schedule.

No SEO experience, but a track record of excellence

After three years with the Bears, Darla came across a posting from Brafton, who was able to poach a massive talent away from the team.

“Prospecting gets tiring, and I was ready to move on,” Darla recalls. “I have always liked talking to people and being client facing, and so I thought about moving into something like an account management role in digital marketing.”

What she might have lacked in technical expertise at that point, Darla made up for it tenfold with client relationship management skills, a decade plus of experience and personality. She damn sure got the job and hasn’t looked back since, taking leadership on some of Brafton’s biggest and most important accounts.

I can be working on a proposal deck one day and talking to a client about current deliverables, or then maybe traveling or solving an urgent problem. It’s not the same thing every day, and I love variety in life.

But what Darla really values in the job is the variety in her day to day — and the fact that she’s handed new business instead of having to hunt it down herself.

“I can be working on a proposal deck one day and talking to a client about current deliverables, or then maybe traveling or solving an urgent problem,” she says. “It’s not the same thing every day, and I love variety in life.”

Indeed, Darla says the recent opportunity to act as a producer for a client video shoot has exposed her to a whole new side of the job. Stepping into a creative role has also given her a new appreciation for her coworkers, who are another bright spot in her life.

“The team at Brafton is one of the best I’ve worked with,” Darla says. “I have been at a lot of places and I do really think that the people here are what make Brafton one of the better places. Everyone is really friendly and eager to help each other out. We all try to pitch and be collaborative. Outside of work, we try to get to know each other and do things or make summer and halloween party plans. I really enjoy getting to know coworkers on a personal level.”

The team at Brafton is one of the best I’ve worked with.

That’s one way to break the ice

While Darla hasn’t been to France since applying for a position at soccer powerhouse Paris Saint-Germain, she does carry the country and her fond memories of it everywhere with her. Tattooed on her side is a quote from “Amelie,” a favorite movie of Darla’s that she saw in a French theater. The movie struck an emotional chord, as she had just moved to the country and away from friends and family. The story isn’t exactly parallel to Darla’s life, but the moment overcame and “ugly crying” ensued.

The tattoo roughly translates to “you don’t have bones made of glass, you can take what life throws at you.”

Aside from professional challenges at Brafton — which she continues to dominate— life has also thrown Darla a twist in the form of a LinkedIn message from a high school boyfriend. After reconnecting, the two were recently married in a way that “he and I exactly wanted it to be.” That is, no pomp and circumstance, just city hall and a private dinner with family one night and a dance-filled open-bar party with friends another.

In the meantime, you can catch Darla brewing real coffee (none of that Keurig krap) and practicing her “stupid human trick” of writing with both hands simultaneously: her left hand producing a backward, mirror image of what the right is writing. Clients love it!

The career path that brought Mara to Brafton went from fine art school to the culinary world and back to the visual side of things.