In another life, one far away from social media marketing, Erin Hancock would be talking to you about the doppler radar over your morning coffee.

No, she wouldn’t be your wife. She’d be the weatherwoman you tune into each morning while you’re getting dressed. Besides, I’m not sure how many marriages include rousing morning discussions about weather tracking systems, but that’s neither here nor there.

What does matter is Erin took a different path than she’d originally planned, one that led her toward a sunny future in content marketing and social media jobs at Brafton.

Now leave your umbrella at home and let’s begin.

From Southeast Asia to social media

Born and raised in Midland, Michigan, Erin was interested in meteorology from a young age.

“I used to have a calendar of my favorite meteorologist on The Weather Channel,” she said. “It was signed by him or something – I don’t even remember now. But I was obsessed with the weather.”

However, she’d switched gears by the time she arrived at Michigan State University. Erin wanted to work in international security, and majored in international relations to pursue her passion. One summer, she signed up to complete an internship abroad, hoping to get more international experience. While she fell in love with her new home of Singapore, an internship in her field of study wasn’t in the cards.

“I was working with a placement person to figure out what to do, and she found me a marketing job,” Erin remembered. “I loved it. I decided I wanted that to be what I did with my career.”

Moving to Boston after graduation, Erin eventually found a position at Brafton as a Social Media Strategist, starting with the company in 2015. However, it wasn’t long before she returned to the Midwest. 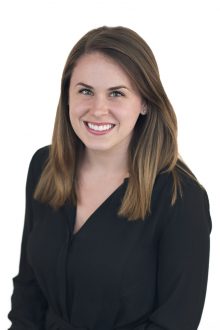 Erin looking camera ready for all your meteorology needs.

“I was [in Boston] for six months,” she said. “The opportunity presented itself to come to Chicago. I came out with another girl, who was from Chicago. We both worked here together, just the two of us at first. We helped build the Chicago Social Media team.”

Erin’s dedication to Brafton’s Social department paid off. She quickly rose through the ranks to become Associate Manager of Social Media at Brafton.

“Now I manage our team [in Chicago], providing any additional support team members may need on client work, reporting or anything like that,” she continued. “I’m like an extra layer of support for our Social Media Strategists, meeting with them weekly and helping them with their professional development.”

Erin’s seen a lot of changes in the world of social media during her time at Brafton, but one thing hasn’t changed: the all-too-common misconception that her job is easy.

“Social media is a lot more than just creating a Tweet,” she said. “To manage a client’s social media, you have to dig into what they’re looking for, who they’re trying to reach. There’s a lot of prep work that goes into creating these strategies. But because the only thing you see from us is a post, it may look a little easier. Then, on the back end, there’s a lot of reporting. Clients are curious how their social strategy is doing, and we’re going in there with each network to show them what worked and what didn’t. We dig into Google Analytics to show them how social is impacting their website as a whole.”

What has changed is the importance of advertisements.

“Ads have really become a massive part of all social media marketing,” Erin said. “That’s probably been the biggest change. When I started, ads were not a focus of ours. But now it’s a pay-to-play game.”

As far as obstacles, explaining the value of social media remains a common challenge.

“Some clients have a harder time understanding social than others,” she said. “But [social media] is where everybody is. It’s what people read on their commutes, and how they find out about things. It’s the new word of mouth.”

That said, some clients fail to see how getting likes on Facebook translates to sales.

“You don’t always see sales come directly from social media,” Erin continued. “It’s part of the sales funnel. Being out there and making a name for yourself increases your legitimacy in the eyes of consumers. Once people gain awareness of your brand, they start engaging with you. From there, you can help them continue through the sales funnel.” 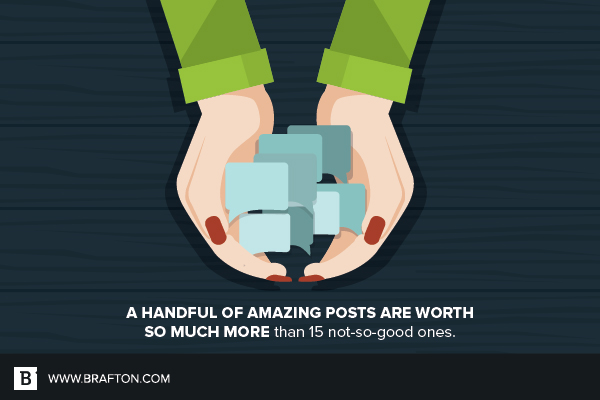 Erin enjoys some vino with members of her Social Media squad at a company holiday party.

According to Erin, the future of social media marketing has a lot in common with a certain live sketch comedy show popular on Saturday nights. In addition to the benefits and growing popularity of live video, she highlighted how live tweeting can spice up conferences and other events.

However, there are some social standbys she wishes would hit the road for good. Chief among them is the idea that you can force content to go viral.

“I’m sorry, but you can’t make a Tweet about cloud technology turn into the ice bucket challenge,” she said with a laugh.

Also, as with content creation, she highlighted the need for quality over quantity.

“Sometimes clients say they want to do a bunch of posts per day,” she said. “But a handful of amazing posts are worth so much more than a bunch of not-so-good ones.”

Of course, Erin herself wasn’t born knowing all this (she was too busy thinking about barometric pressure and cloud formations, no doubt). She learned it by immersing herself in the world of social media, and that’s her advice for others hoping to make a splash on Brafton’s social team.

“Start following different thought leaders to stay up to date on what’s happening and industry best practices,” she said. “There’s just a lot more that we can do on social media now. Each network’s capabilities keep growing. It’s important to keep up with that.”

Celebrated writer and academic Isaac Asimov once said: “No one has a sorrier lot than the weatherman. He is ignored when he is right, but execrated when he is wrong.”

Erin works hard to ensure her and her team get it right every time. You may not be able to predict the weather, but it turns out research and experience help you do a damned sight better online.