I learned soon after arriving at Brafton’s Chicago office in October 2015 that I wasn’t the only Dom in town. There was another. His reputation echoed through the freshly painted halls of our office in the West Loop. I can still hear the voices:

Perhaps it was his nonchalant but never aloof demeanor, or his uncanny knowledge of AP style, which he unhesitatingly shared with the rest of us. Or maybe it was his ability to weave sentences together more tightly than the cello strings he briefly bowed as a child before permanently defecting to guitar at age 11.

But it became clear to me in time that Dominic Tortorice (known in these parts as Dom T, Dom one, the original Dom, etc.) gave the rest of the Doms, and all of us for that matter, something to live up to. 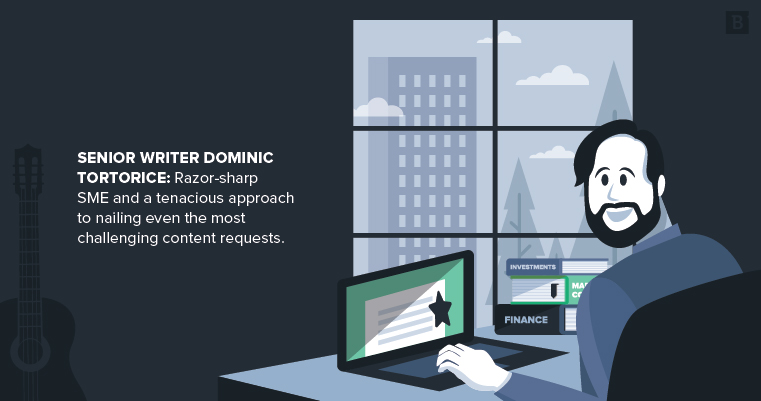 “If you really want to hear about it, the first thing you’ll probably want to know is where I was born, and what my lousy childhood was like, and how my parents were occupied and all before they had me, and all that David Copperfield kind of crap, but I don’t feel like going into it, if you want to know the truth.”

Being a JD Salinger aficionado and all, this is what Dom T might’ve said when I asked him to tell me about himself if he were a jerk. But the man is anything but (and his favorite Salinger piece is “Nine Stories” anyway).

He told me in his characteristically calm and unassuming tone of voice that he was born in St. Paul, Minnesota, but spent most of his life in Oak Park, a village nestled against Chicago’s West Side (and incidentally Ernest Hemingway’s birthplace).

Like many Brafton writers, he was always fond of literature, and he realized in college that he wanted to work in the business of words. He joined his school paper, moved up the ranks to editor (foreshadowing) and set his sights on becoming a professional writer.

After graduating from college, Dom’s mom happened upon a job posting for a news and content writer position for a company called Brafton. She emailed it to Dom T, who applied for the job, interviewed for the job, got the job and then aced the job.

Today, he’s a senior writer who lives his life one quarter mile at a time. See Dom T below, saying as much himself.

Dom T started out writing on Brafton’s business desk. Within six months, he was promoted to assistant section editor. Six more months and he was promoted to section editor of the industry and law desk. Fast-forward a year and half, and he became a lead editor responsible for training incoming writers and editing their content creation efforts to bring them up to quality standards.

This is where Dom T and my story converge. I was hired around this time, which meant I had the unusual privilege of being mentored by a wiser, more seasoned, equally Italian version of myself. I recall that, on one occasion, he referred to me as “an imposter.”

From here, winds of change at Brafton swept Dom T into the role of special projects writer. He then ascended to the rank of senior writer, a title he’s upheld for about a year now. And if you asked Dom T, he’d tell you that he wouldn’t have it any other way:

“I live to write for challenging clients, those clients that are either high-profile and they expect a lot or are just important to the business itself,” Dom T said. “I just really like to write.”

I live to write for challenging clients, those clients that are either high-profile and they expect a lot or are just important to the business itself. I just really like to write.

He’s become especially knowledgeable in finance. He actually developed an interest in the subject during his time at Brafton when he wrote daily price briefs about market conditions for a particular client.

“I then wrote different white papers about investments in diamond mining and nano-materials. This led me to be interested in finance which is weird because numbers – that’s not how my brain works,” Dom T said. “But then I started researching and writing more things about markets, securities, investments, the Fed and all of that.”

And we’re glad he did. Brafton would be lost without his razor-sharp SME and his tenacious approach to nailing even the most opaque client expectations.

Advice from a pro: Content creation is an exercise in focus

Dom T is a steady and comforting but admittedly elusive presence at Brafton. He mostly lends his writing chops and financial SME from his domicile rather than the office. This adds to his mystique. Like most of the writing greats, he’s better known for his incisive, witty and well-crafted prose than for his physical embodiment.

But I don’t want to leave you with false impressions, either. Dom T is about as down to earth as they come. His copy is full of apropos pop-culture references. And if you ask him what the meaning of life is, his response is disarmingly if not refreshingly honest: “I couldn’t tell you.”

When he’s not busy dominating content marketing, you might find him plucking the strings on his guitar (he really stuck with it), catching a show at The Empty Bottle with friends or patio lounging on a warm Sunday morning reading a physical copy of The New York Times or trying to crack the Sunday crossword.

We can all learn something from Dom T about creating content – and life in general (I know I have, and not just because he helped train me).

“You have to learn to sit down and treat content creation as dedicated work and not as something to multitask on or do in the background,” Dom T said.

You have to learn to sit down and treat content creation as dedicated work and not as something to multitask on or do in the background.

For six years, that’s exactly what he’s done for Brafton: Tune out the noise and focus only on the challenge in front of him, without hesitation or intimidation.

Brafton is all the better for it.