Matt Kaplan might as well open up a haberdashery at this point. The man has worn so many hats throughout his time at Brafton, no one is more qualified to sell fine gentlemen’s headpieces (I like to picture Matt sporting a tasteful stove pipe number, myself).

Boston and back again

Born in Boston but raised in Buffalo Grove, Illinois, Matt was a football fanatic from a young age. Alas, a career in the NFL wasn’t in the cards for him.

“I quickly realized I lacked the proper eyesight, and the size, and general athletic ability for football,” Matt recalled.

However, football’s loss was content marketing’s gain. Matt found himself at a crossroads as a young man, weighing his budding passion for both science and writing. In the end, words won out over math.

“I did a lot of writing and reporting in high school,” Matt said. “While I never liked English classes, I liked writing and talking to people and hearing their stories.” 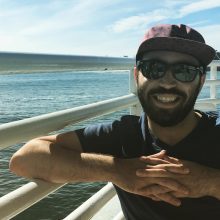 Matt Kaplan in the flesh. Notice what’s on his head?

Following stints as a scribe for his high school newspaper and yearbook, Matt returned to his birthplace and pursued a journalism degree at Boston University. Soon enough, however, he discovered his love for writing didn’t exactly jibe with the rigors of reporting.

“When I was in Boston, I had an internship where I was working as the statehouse reporter for a local newspaper,” Matt remembered. “It was three days a week. I was there from early on to late at night, interviewing politicians, covering the latest of what was happening in the statehouse. I absolutely hated that. I was miserable the whole time. There was little to nothing I liked about that experience. It was humbling, because I did all this work to get a journalism degree but political reporting was not what I wanted to do.”

After graduating and returning to Illinois, Matt found work at an online publishing company that specialized in cooking. He got experience writing online content and keeping tabs on the website’s internet presence. He found the web analytics aspect of the job appealed to the more scientific part of his brain.

“They didn’t call it content marketing at the publishing company, but it was,” Matt said. “I found it to be a unique combo of being creative and scientific. It was a good learning experience, and from there I got a job at Brafton.”

Matt started as a Brafton News and Content Writer right before the company’s burgeoning Chicago office began to split its Editorial department up into teams focusing on specific industries and subject matter expertise.

“For whatever reason, they gave me a lot of technology clients,” he said. “I took to it. I started primarily writing for tech and IT clients. A few months into the position was when they formed our first dedicated editorial teams.”

Matt became the Assistant Editor of Chicago’s technology-focused editorial team, and quickly after that took over as its Section Editor. While he’s held multiple titles since then, acting as the steward of Chicago’s tech writers was his primary duty for the better part of three and a half years.

Eventually, Matt and his now-fiancée decided to leave the joys of the Midwest behind in favor of California. After living most of his life in Illinois, he was ready to try somewhere new.

Unfortunately, Matt couldn’t manage his team remotely. While his love of analytics made him a natural fit for a Content Marketing Strategist role, an opening in that department wasn’t available at that time. Instead, he found one of Brafton’s first Project Managers, acting as a client advocate and liaison between different departments.

Soon after he’d unpacked his bags in The Golden State, however, Matt made the difficult decision to leave Brafton in pursuit of another career opportunity. After years of wearing different hats at the same company, he was curious what else was out there.

“I found another position that was completely different from Brafton, working as a proposal coordinator at a transportation consulting firm,” he said.

However, he soon found himself missing the world of content marketing. More specifically, he longed for the hustle and bustle only a company like Brafton can provide. Despite this, he was determined to stick it out at his new gig. And then a miracle arrived – a miracle in the shape of Brafton Director of Content Marketing Will Stevens, that is. Long story short, a Content Marketing Strategist role had opened up, and Will wanted to know if Matt was interested.

After four months away, Matt returned to the Brafton fold, this time sporting the strategist’s hat he’d long been coveting (picture a white Stetson). While pleased to finally be the strategizing cowboy he’s known he could be, he also felt strange about returning to the job he’d just left.

“It was totally weird,” he said. “Even just logging into my old email address was weird – seeing all the names of people I already knew show up on Gmail. I don’t feel like I missed that much, but every now and then there’s some discussion of something I missed while I was gone and it feels strange.” 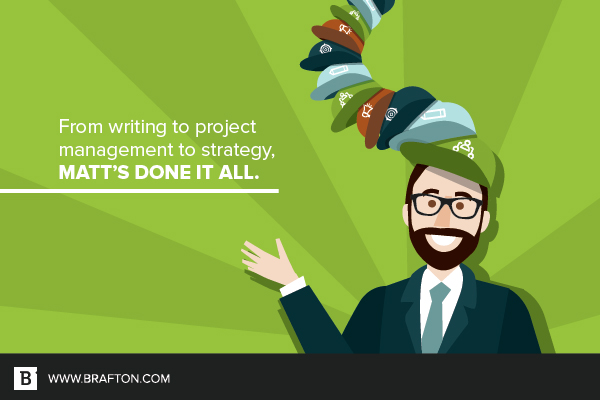 Unfamiliarity with inside jokes that had developed in his absence aside, Matt has thrown himself into his new role with vigor.

“It’s creative, but in a very different way than it’s creative to be a writer,” he said. “You have to be nimble. Sometimes you can be working with a client you get to know who then hires new people and everything changes. It’s all about the strategy now, too – planning out and thinking about how to accomplish goals.”

More than most, Matt has brought along a ton of perspective to his new role. After all, who understands the inner workings of a company better than an individual who’s been involved in nearly all of them?

“So much of Brafton is making sure every team member is aligned internally,” Matt said. “With a background in the creative side, I hope people know I understand their challenges and triumphs and how it all works. I have a huge amount of respect for all the work that we do and the creative services we offer. I know writing a great blog post or developing a cool video or great infographic is really hard work. I’ve been involved with all of those to some degree, so I hope that level of respect comes through in the conversations I have.”

Hopefully, he can now take a break from collecting new hats and settle into the role he’s been itching to play.

Welcome back, Matt. Take your hat off. Stay a while.