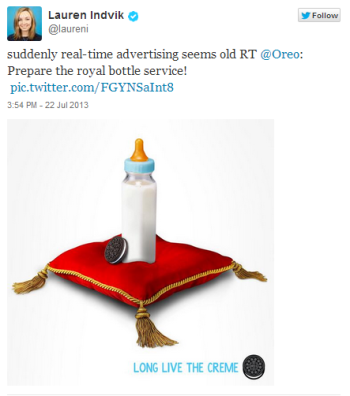 It was hard to ignore the #royalbaby craze. On July 22, 2013, a global audience was lying in wait for a new member of the royal family to be born. Well, they were actually tweeting in wait, according to data about the volume of social content created around the event.

Social chatter took off as soon as the official Clarence House handle announced The Duchess of Cambridge had been admitted to St. Mary’s Hospital in the early stages of labor – a message that was retweeted 6,674 times and favorited 2,291 times.

A phenomenon is born…

Conversation came to a head at 8:37 p.m. that evening, just after the birth was finally announced. People around the world were clicking and typing away, trying to be the first to break the news to their personal networks. Twitter’s count shows there were 25,300 Tweets per minute in the aftermath. Connecting all of these well wishes and broadcasts together was the hashtag “RoyalBaby,” and thus another phenomenon was born.

Of course, the global audience of spectators was not alone in celebrating this event. Brands were armed with catchy, clever and downright creepy digital content to ride the #royalbaby trend to the top.

… And then it stalled. Even heavy hitters like Oreo, Charmin and Hostess received backlash from followers who were less than impressed with their impeccably timed creative releases. Why was this different from other events that turned into explosive social trends?

Oreo’s real-time Twitter ad in response to the Super Bowl blackout went down in the marketing history books and just a few weeks ago, #Sharknado posts took the world – OK, the U.S – by storm. I suspect that the problem wasn’t with brands’ actual content. Although, Charmin’s golden toilet throne did push the envelope for many consumers.

In surfing terminology, there’s something called a ‘ground swell.’ It’s a wave that forms far offshore, is powerful and highly visible. Sounds like a great ride. Except, everyone sees it coming and has the same idea to catch that wave.

With nine months of anticipation, brands perhaps had too much time to sit in meeting rooms and come up with what seemed like failproof content concepts. It took the magic out of real-time marketing – that occasion when people truly have foresight, combined with a stroke of brilliance and are agile enough to deliver an end product just in the nick of time.

Basically, it’s that X factor in which you find yourself on the verge of something huge only when it’s almost upon you. SEOs and marketers alike recognize the value of catching a trending wave and riding it to better website traffic, new leads and stronger conversion rates. To make it to the top, they first need to be able to spot the swells that will provide them with a good ride from those that dissipate before they make landfall.

Seventy-four percent of businesses have dedicated a point person to their content analytics so they can capitalize on real-time trends. Metrics about referral traffic, bounce rates, exit pages and time on site help marketers determine what topics, tones and distribution channels are resonating with their target markets. From there, they can narrow their scope, pay attention to breaking trends about specific subject matter and create content for social channels where engagement tends to peak.

2. Know what you’re looking for

Do you know who your key influencers are? Do you know where your competitors get their breaking news? Do you know what insights trigger positive and negative responses from your audience? Find the answers to these questions and then, as cheesy as it sounds, practice.

Don’t forget the lesson at hand that not every wave is worth riding.

Develop a regimen that allows you to take the pulse of poignant outlets, thought leaders and industry influencers. If you make it a habit to look where they’re looking, you might spot the next big thing before everyone else. However, be careful as you scout the landscape. Don’t forget the lesson at hand that not every wave is worth riding.

3. Don’t jump on every trend

The new addition to the royal family is great news and it surely was the center of attention for a short period of time, but it’s not necessarily appropriate subject matter for every company. Consumer-facing baby brands? Sure. Cloud computing companies? Probably not.

A well-timed Twitter post about a hot topic might lead to more exposure in consumers’ News Feeds, but Tweets move fast. Before you know it, your clever update will be pushed out of sight. Generally, it’s better to choose trends that resonate with your customer demographics. Catching the front of a niche wave will give companies visibility long term, but also with the people who are more likely to convert.

4. When it comes crashing, start paddling

Among all the advertisers and marketers who create cross-channel strategies to enter the realm of real-time responsiveness, only about 20 percent were considered true “performance leaders” in a recent IBM study. Of that top echelon, just two in five regularly produce web content for immediate publication.

When you have the pieces already in place – content writers, strategists and distribution methods – you can take swift action when you spot the perfect opportunity for a real-time content push. The better prepared you are to create content, the faster your response and the longer you can ride each trending social content wave.

You never know when the next one’s coming

If there’s one main takeaway from the #royalbaby backlash, it’s that real-time marketing happens in the moment – not months before. Planning creative content well in advance can make it seem contrived – like brands are trying too hard to cash in on a major human events story. And to be frank, nobody really likes that guy.