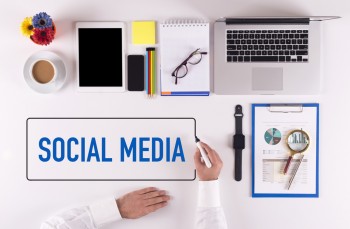 ghout 2015, we’ve seen several major changes and improvements to the way we conduct business on social media. We’ve seen brand new networks rise, while others have fallen. We’ve watched popular networks pivot, and promising networks not take off as expected.

The majority of top businesses are represented on social media, and Onalytica estimates that as many as 40 million small businesses use Facebook pages or advertise on the network. AdWeek reports that 91 percent of major brands are on two social networks to keep up with the average adult, who uses at least two networks personally.

I sat down with Sumit Sharma, Brafton’s Social Media Engagement Manager to highlight the most influential changes in social media marketing in 2015.

media can be hard to predict. The most promising networks from last year might be gone by next year. The most unsuspecting apps one year could be one of the most valuable the next year. Who would have thought in 2010 that Instagram, an app that started out as a sharable cameraphon

e filter, would be purchased by Facebook two years later for $1 billion and turn into one of the biggest networks in the world? Vine, on the other hand, started out in 2013 with great promise, backed by Twitter and poised to be one of the most popular video-sharing apps. Today, only 10 percent of top brands use it regularly, and its growth has slowed dramatically.

The juggernauts – These are the networks that a huge portion of internet-users – kids, adults, marketers and amateurs likely use. They’re widespread, profitable and great platforms for marketing.

On the rise – 2015 saw the inception or popularizing of many cutting edge and exciting social network platforms:

The old faithfuls – These are the networks you know, but are showing signs of slowing growth and influence. You

might use them personally or market on them professionally, but this group of networks is chugging along with less room for growth and expansion t

LinkedIn – 200 million monthly users – $2.2 billion 2015 revenue. While LinkedIn’s user-base only grew by 3% over the last quarter, it is still one of the strongest and most effective professional networks for marketing, especially for B2B.

al, tight-knit news and entertainment board. Corporate promotion is tricky and risky, but can yield great results when done correctly.

Google+ – While its 2.5 billion accounts sound impressive, up to 90% of those accounts have never engaged on the network, since every Google account, including Gmail, automatically includes a G+ account. The 250 million acti

YouTube – Google’s 11-year-old video site boasts 1 billion users (one-third of all internet users), a revenue of $4 billion and 4 billion daily video views. YouTube reaches more 18 to 49-year-olds than any cable station in the US. Partner revenue has increased 50% and mobile revenue has doubled year-to-year. 300 hours of video are uploaded every minute, and 6 billion hours of video are watched every month (that’s almost 700 millennia of footage every month!).

The misfires – The failures and disappointments for Changes in the past year

A few important changes that took place in social media marketing this year included the increased depth in audience analytics and a deeper integration of social media into consumer interaction and direct sales. On the former, both Twitter and Facebook introduced tools to measure and target audiences on a more granular level: On the latter, while social media has steadily become more parallel and, at times wholly necessary for the success of other media products, it was taken to a new level this year with direct selling via social really reaching a stride. We’ve seen this in the successful iterations of impressive (albeit, now annoying) Instagram ads and product pins for purchasing items on Pinterest.

On the inverse, the platform Ello, which was originally lauded for its stand against advertising, seemed to be so focused on that “gimmick” it forgot to find a unique voice and feature offering to allow it to be competitive in an already oversaturated market.

You can read more here about why we ditched social media automation.

Social ads are more customizable and targetable than normal web ads. This year, Facebook desktop and mobile ads have respectively shown 8.1x and 9.1x higher click-through rates than non-social web ads. Here are some of the most notable improvements in mobile advertising from the past year:

Each of your campaigns can drive more foot traffic by giving customers directions, making it easy for them to call you and offering the option to use messages. – Social Media Examiner

It’s been a huge year for social marketing. The leading social media outlets have the influence previously only found in network TV. Millions of brands are taking advantage of new strategies for promoted and organic marketing across dozens of networks. If you have any questions about Brafton’s social media strategies, take a look at our free social media marketing eBook. Here’s to a great new year!