It’s the reason viewers tuned into “Saturday Night Live” even during its darkest, unfunniest years (I’m looking at you, Jim Belushi). It’s why partygoers across America take time out of their busy drinking schedules on New Year’s Eve to see what’s happening in Times Square.

Live is real. It feels special and suspenseful. It means anything can happen.

From Twitch to YouTube vloggers to Katy Perry streaming her entire life to promote her new record, it’s not going away. And today’s technology is making it easier than ever for content marketing professionals to get in on the act.

From past to present

The current live video craze can be traced back to Periscope and the rise of smartphones, according to Brafton Senior Social Media Strategist Walton Clark.

“Live video on the web is not a new phenomenon, but required special equipment and software in the past,” Walton said.

“One of the first incarnations of modern live video came from Periscope, an app that worked to give users on Twitter the ability to stream live video. Technology has advanced by leaps and bounds with mobile devices increasing their ability to not only record video, but do so in better resolution. Today the average user now has a high-quality camera in their pocket.”

“Facebook is particularly invested in live video, taking out advertisements to promote it, and weighting it higher in their algorithm,” Walton said.

“While it’s still early for industry-wide metrics, the reach and impressions from live video are significantly higher partially because networks have decided to weight them that way.”

If audience engagement is any indication, Facebook’s gamble is paying off. 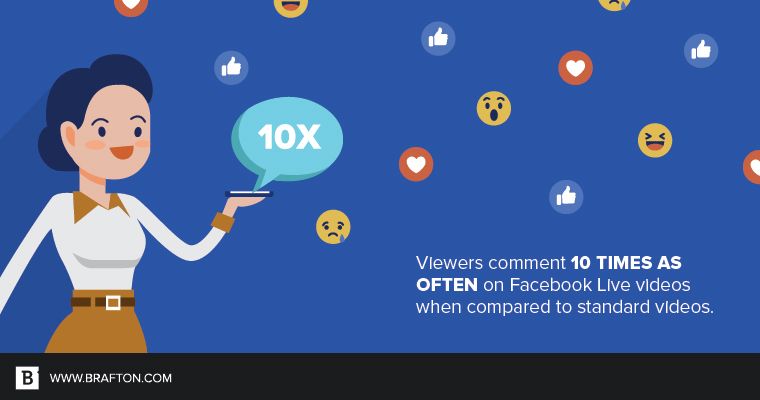 Getting your brand in on the act

While it’s clear modern marketers shouldn’t ignore Facebook Live and other live streaming platforms for their video marketing strategies, the question of where to begin remains.

“From a strategy standpoint, like any marketing collateral you’re creating, you need to figure out what your objectives are,” Walton said.

Perhaps your goal is engagement. Creating live videos that address blog comments or social queries and answer questions in real-time is a great way to make a connection with your audience. Maybe press for an upcoming event or product launch is more your speed, in which case a live video announcement with proper promotion is just the ticket to build excitement and generate audience interest.

In any case, there are best practices to keep in mind:

While live video may seem geared more toward business-to-consumer audiences, don’t forget its power for the business-to-business crowd.

“Live video has an already-established track record for B2B businesses in the form of webinars,” Walton said.

“This type of event marketing is a valuable tool for lead generation and engaging with larger audiences. B2B audiences can utilize their social networks to share live streams of presentations and their thought leadership. For example, if you’re doing a video explaining a concept, you can open up discussion with your prospective audience utilizing comments to get feedback and answer questions. Likewise, I have seen clients use it to make big announcements about their brand. Making it an event to check out is important to maximize impressions.”

While you may not break the internet overnight with your first live stream, by routinely providing valuable, relevant content to your audience, you can build a solid following, expand your brand reach and engage with prospective customers on a whole new level.