As Poet Laureate Billy Collins put it, “Everything was hand-lettered then, not like today.”

Nostalgia is a smile creeping across your face, before you even realize why. It’s that bygone memory in the back of your mind that unfolds and reappears at unpredictable moments. The grip of your hand curling around an N64 controller – that’s nostalgia.

These are deeply personal feelings. And no matter how individualized they are, it’s likely that people all across the world have experienced similar sentiments.

Companies, too, can tap into nostalgia when speaking to their audience.

Nostalgia marketing is the crafting of campaigns to evoke feelings like comfort, happiness, security and longing. Customizing brand messaging to cater to these universal states of being allows brands to connect their products and services to base instincts and conceptual modes of thinking. Marketing fueled by memories creates deeper connections with consumers, with the goal of turning emotion into revenue.

It’s an incredibly valuable and humanizing tool for marketers of all sizes.

Your brain on nostalgia

Nostalgia occurs when certain inputs are processed by the amygdala, the part of the limbic system that deals with decision-making, emotional responses and the recall of memories.

Triggers like touch, smell, sound, weather and music have all been shown to generate intense mental recollection, resulting – if these stimuli are positive – in nostalgia.

The brain then associates these stimuli with particular events or people from the past, like your family’s favorite vacation spot or your childhood best friend.

Politicians, advertisers and movie studios love to romanticize the past because it amplifies the aforementioned feelings in voters, consumers and viewers.

Businesses are notorious for running campaigns with the intent to arouse the feeling of nostalgia. Here are some recent examples you may remember:

Spotify compiled the total annual listening history of each of its users and emailed them a comprehensive breakdown of their 2018 jams. Some lucky users even had their playlists broadcast on billboards in major cities around the world, like Jenna, here in London: 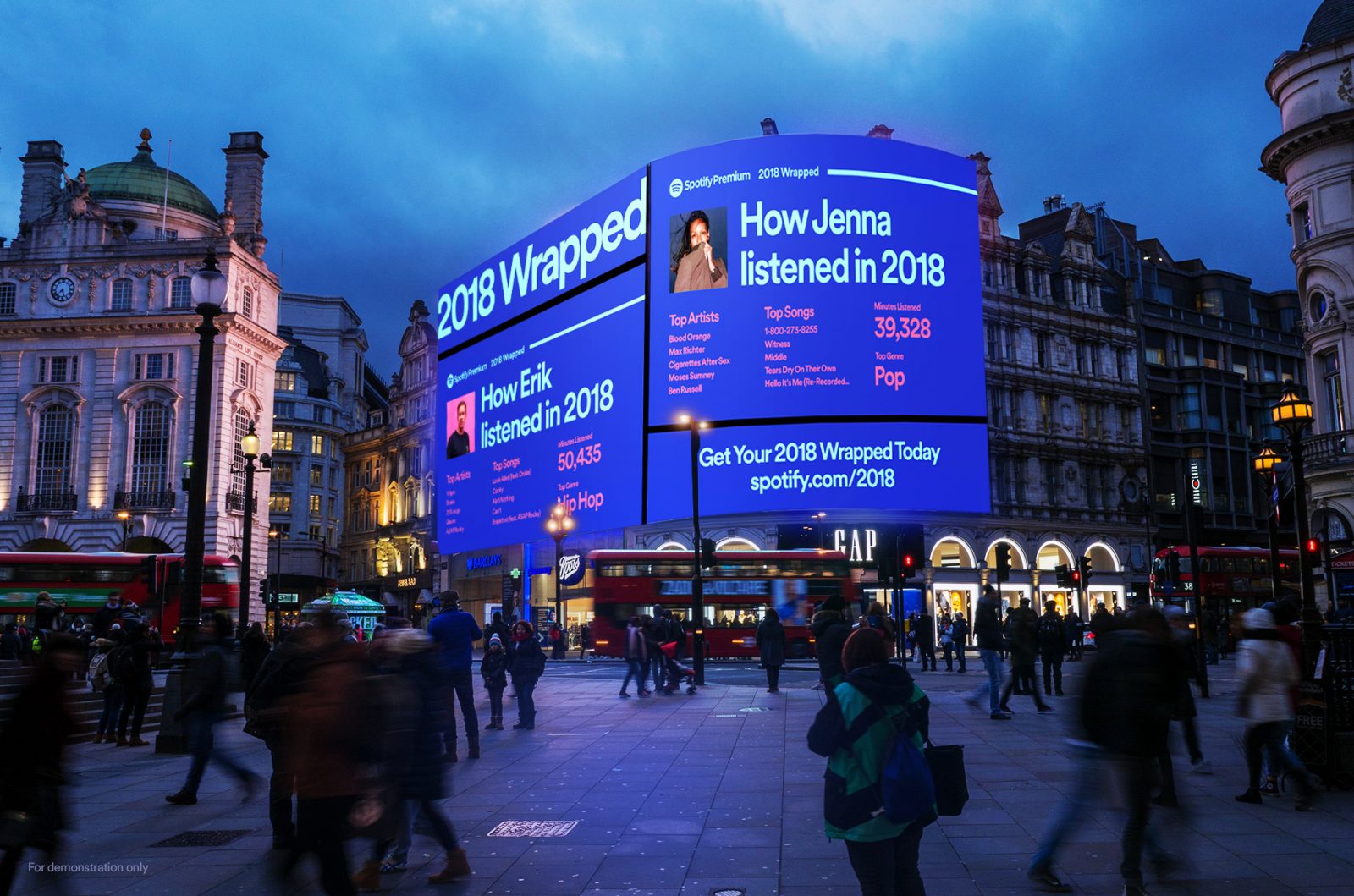 Netflix’s Stranger Things is already into its third season, and its creators, the Duffer Brothers, attribute its inception to ‘80s pop culture, with specific homage paid to the works of Stephen King and Steven Spielberg. Everything about the show elicits ‘80s nostalgia, even the font on its ads.

The search engine honors historic dates and people by changing its “Google Doodle” on a regular basis. By doing so, Google has leaned in hard to the nostalgia trend. Here’s one from a few years ago:

The millennial clickbait master BuzzFeed mainlines nostalgia right into our eyeballs with its succinct throwbacks to pop culture relics of yesteryear. It has reached the extent that BuzzFeed now has an entire category page devoted to ‘90s nostalgia. If you have to update your sitemap to make room for more nostalgia, then you’re on to something. 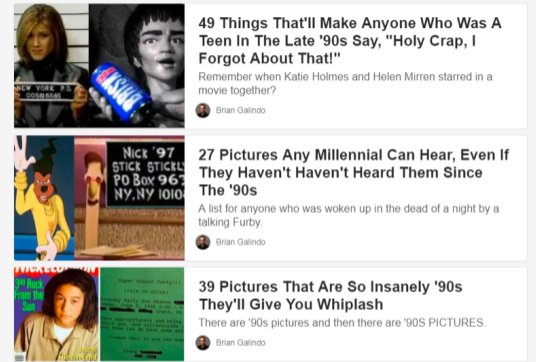 Football fans may recall the Doritos commercial during the big game when the Backstreet Boys and Chance the Rapper teamed up to remake “I Want It That Way,” which Rolling Stone called “unwatchable” and “borderline upsetting.” And I have to agree with them. Consider this a case of empty nostalgia. 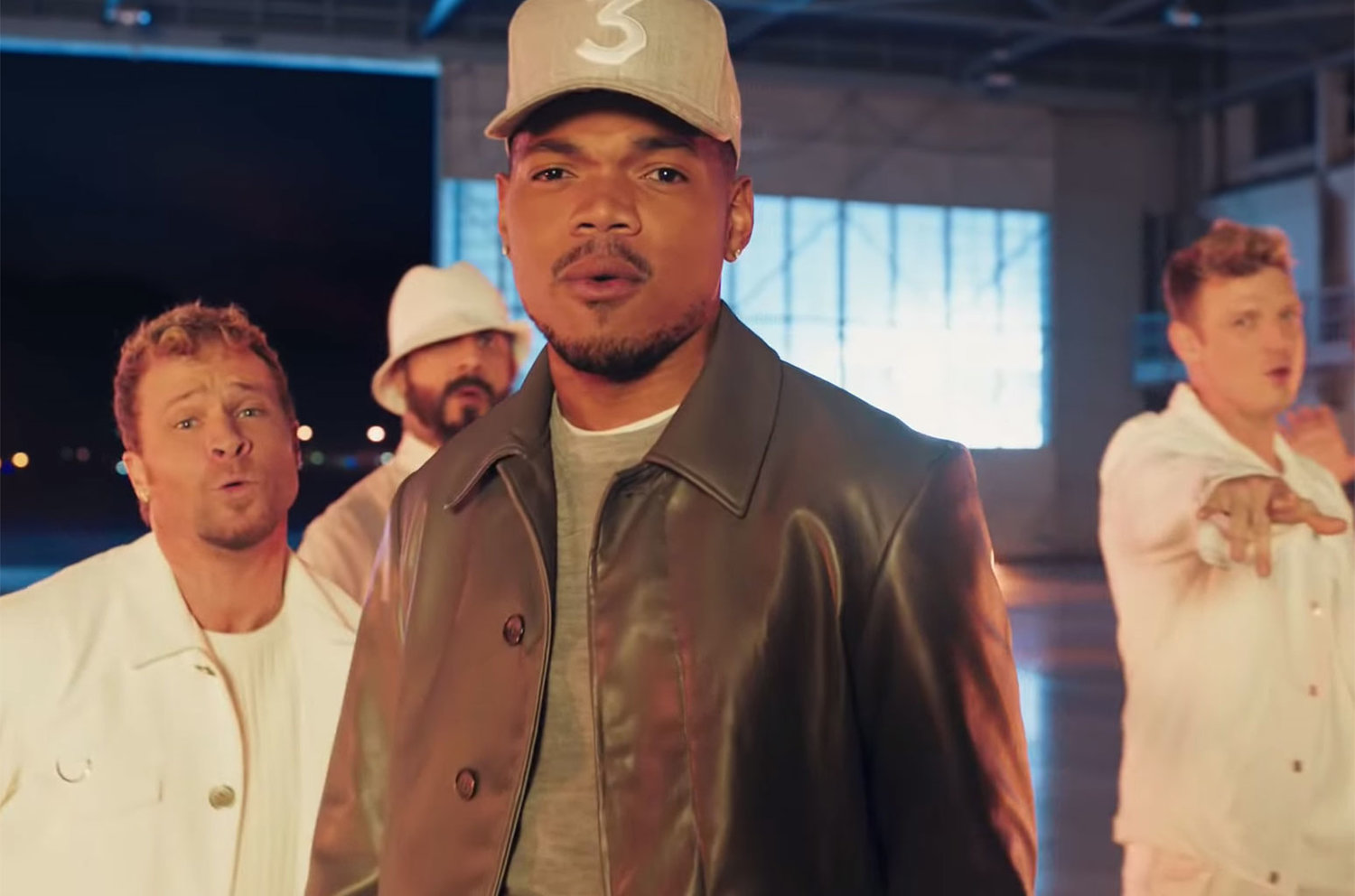 Today, Target is keen to stock up on vintage graphic tees, featuring the likes of bands, cartoon characters, movies and other iconic cultural touchstones. 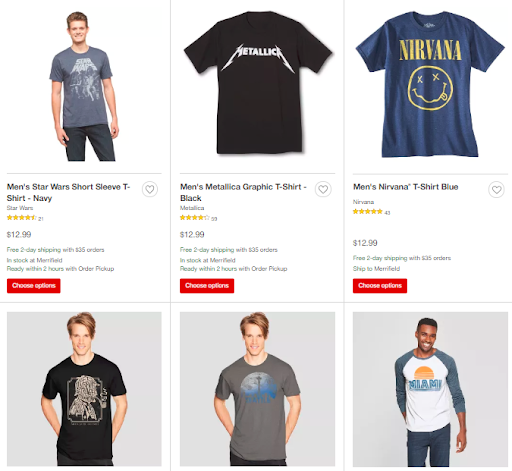 Remakes of Lion King and Aladdin have created both nostalgia and skepticism. There are reportedly more than 15 other Disney animated films to be remade using live-action features. We’ll just leave you with this photo: 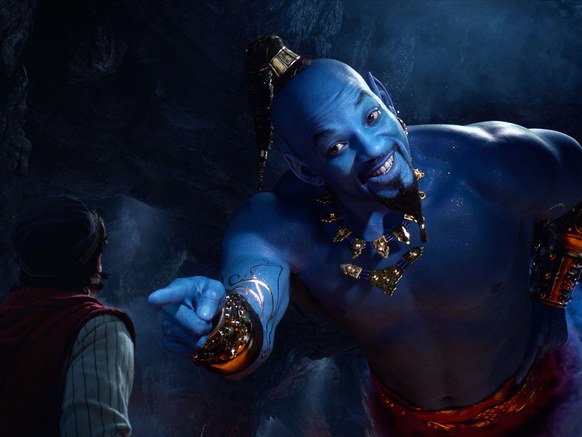 The Greatest Generation survived the Great Depression, World War II and the Korean War, and much of their formative years were shaped by extreme deprivation. They were simultaneously leaders of the Civil Rights Movement and the Silent Majority, and were much likelier to pursue financial security and risk-averse employment.

Nostalgia for this era is harder to come by, due to the passing of time, but it can be seen in younger generations’ persistent demand for equitable wages and stronger union protections. One could also make the case that trends toward tiny homes, homesteading and organic farming are hallmarks of a wholesome agrarian lifestyle that many in the Silent Generation would find familiar.

Known as the “Me Generation,” baby boomers have a fraught relationship with today’s culture, particularly because they dominate politics, industry and law, granting them outsized influence on the rest of the world population.

Boomers rode the post-WWII boom for many years, resulting in upward economic mobility against the backdrop of assassinations and cultural revolutions. Members of this cohort are more likely to be nostalgic for the fleeting idea of “simpler times” without technology, without extreme ideological rigidity, without 24/7 public scrutiny. The “white picket fence” philosophy is still very much front of mind.

Being sandwiched between baby boomers and millennials has made Gen Xers somewhat of a forgotten or overlooked generation, through no fault of their own. They witnessed Watergate, hair bands and the rise of grunge and hip hop.

Their enduring impact on pop culture can be seen through the staying power of Dungeons & Dragons, barcades and obsessive ‘80s fetishization, along with the renaissance of Gen X throwbacks, like Ready Player One, Stranger Things and every Indiana Jones reboot.

As the last generation to experience the “unplugged life,” millennials have, at any moment, one foot in the past and one in the present. In other words, they are inextricably nostalgic.

Millennials brought back Pabst Blue Ribbon and Schlitz (you’re welcome). They also brought back vinyl, handheld cameras and ‘90s TV programming, as evidenced by the revival of Full House and Roseanne.

Is it possible for such a young generation to be nostalgic? Already?

Living their entire lives under the specter of pervasive technology, it’s common for today’s young adults and adolescents to reminisce on defunct social media platforms like Vine, as well as some of the original YouTube influencers who don’t publish much anymore. Legacy gaming systems and even early Taylor Swift often crop up in Gen Z nostalgia threads (I confirmed this on Reddit).

Understanding your audience (and their history)

Each of the above demographics is a target audience. On the surface, it seems like it would be an easy task to market your products to the correct audience – my 88-year-old grandmother doesn’t desire the same things as my 5-year-old nephew, right?

The difficulty lies in the (mis)understanding of multidimensional purchasing patterns and decision-making.

For a B2B buyer, you can’t simply message to a single person. B2B brands can have dozens of stakeholders involved in purchasing, as well as extensive legal and compliance hurdles. So you need to be able to target each persona within that multilayered organization. This often means developing dedicated buyer personas of your audience, typically four to six.

The difficulty lies in the (mis)understanding of multidimensional purchasing patterns and decision-making.

For instance, we have, among others, a Gen X “avid reader” persona in addition to a millennial “commercial influencer” and a Baby Boomer “classic decision-maker.” We write content for all of these people, meaning nostalgia marketing needs to be appropriate for the specific reader in question. You’ll find that memes, voicy tone and references to the ‘90s are more common in our millennial persona writing, while straightforward, data-driven content is targeted to our boomer persona.

Marketing on memory: Building a campaign

Some marketing campaigns are extremely on the nose. It’s very clear they intend to tug on the heartstrings (cue Sarah McLachan’s “Arms of the Angel” ASPCA commercial). Others are more subtle and the premise only becomes clear toward the end, such as the Mean Joe Greene Coca-Cola commercial that’s recycled every football season.

The key is that the impact has to land, and it has to feel true. If you’re running a campaign based on emotion and intangible memories, your content can be insulting or baseless if you don’t actually generate that nostalgic feeling, if you’re clearly deploying a salesy message masked by cheap throwbacks.

This is where focus groups, poll testing, internal surveys and other forms of social data are a necessity. Your personal ideas of the ‘70s, for instance, may not be the same as another’s. You need to verify the themes, trends and touchstones that are most likely to resonate and entice consumers to spend money.

The key is that the impact has to land, and it has to feel true. Your content can be insulting or baseless if you don’t actually generate that nostalgic feeling.

For Hallmark, that’s sentimentality. For Folgers, it’s comfort. What is it for your brand?

Videos and graphics are the dominant forms of nostalgic content. That’s because, as discussed before, visual stimuli are high-trigger inputs. Our brains are designed to absorb and react to the world around us through our five senses, so your nostalgia should be targeting eyes and ears.

A long blog post or an in-depth white paper isn’t going to move the needle. Think video narratives, custom illustrations, hi-res photography and interactive content that creates a connection beyond just words on a page.

Based on the capabilities of your own marketing resources, you’ll have to fit your nostalgia into budget and talent constraints. It’s also worth mentioning that nostalgia can be a one-note bit, so there may not be a huge need to revisit this style of marketing with each campaign.

From reminiscence to ROI

Part of the reason why nostalgia works is that it forms emotional connections, but what does that do for cold hard revenue? That is less clear. 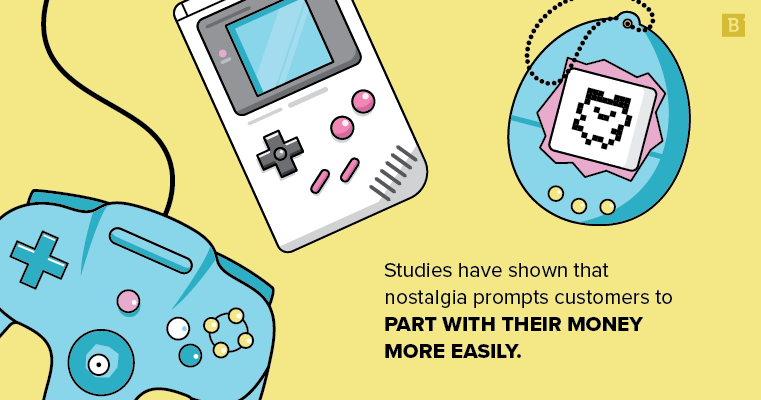 Metrics like social sharing, referral traffic, YouTube viewership and time on page can be helpful indicators to start out, although, depending on your approach, you should also focus on bottom-of-funnel actions too.

Brands have run “throwback pricing” campaigns, which are limited-run exclusive product offers that are priced much lower than usual. The customer would essentially receive 2019 services for 2009 prices.

There’s also precedent for using certain nostalgic phrases like “remember when” and “turn back the clock” to insinuate simple times and cheaper prices prior to customers converting. And studies have shown that nostalgia prompts customers to part with their money more easily, by depressing price sensitivity, weakening the desire for money and implicating a social connection with the world around them. Nostalgia also correlates to brand trust, a primary indicator of repeat purchases.

Ad copy on product pages – one of the final steps before checkout – is the perfect time to experiment with nostalgia, using the aforementioned phrases along with visual CTA cues that are vintage or referential to popular art fads of previous eras.

Netflix has jumped into nostalgia in a very distinct and segmented way. One of its flagship streams, CNN’s decades miniseries, dives into every facet of respective decades, combining first-person interviews, flashback footage and present-day commentary to frame prominent cultural events of the time. CNN has released The Sixties, The Seventies, The Eighties, The Nineties and, most recently The 2000s.

Audiences of every kind will surely find something humorous, something they’d forgotten, something they still long for in each of these documentaries. And that’s the kind of pull every piece of content should have – a small kernel of truth, a memorable moment that’s worth sharing with colleagues and friends.

Also, to be honest, I miss my Tamagotchi.