What do you do when you lack inspiration? Those who’ve worked or studied in a creative field know that one answer is to look at the work of others. Your peers are great sources of inspiration, and their influence can inspire you to create something truly innovative.

Hopefully, you’ll get that feeling with these successful inbound marketing examples. These ideas can help you get a little more creative with your own content while still seeing stellar results.

Be The Match matches its audience

The story: If you’ve ever walked past a group of young adults desperately trying to canvas for animal welfare, then you know how much nonprofits use traditional outbound marketing strategies to acquire donations. In fact, nonprofits seem slower than other organizations to adopt inbound lead generation strategies. That said, charities have boosted their content marketing efforts over the past few years, leading to a steady growth in collective donations from 2012 on.

But this growth doesn’t mean they’re out of the clear. Some organizations still struggle to get donations, while others don’t receive support from the right people. This latter scenario was the case for Be The Match, an organization operated by the National Marrow Donor Program that connects potential donors with blood cancer patients.

Be The Match was struggling to reach its most-needed donor type: young men aged 18 to 24. Not surprising – women tend to give more to charity than men, possibly because they tend to be more empathetic and thus more likely to help the less fortunate. In fact, many nonprofits appeal to this sense of altruism in their marketing by highlighting the people who need help. 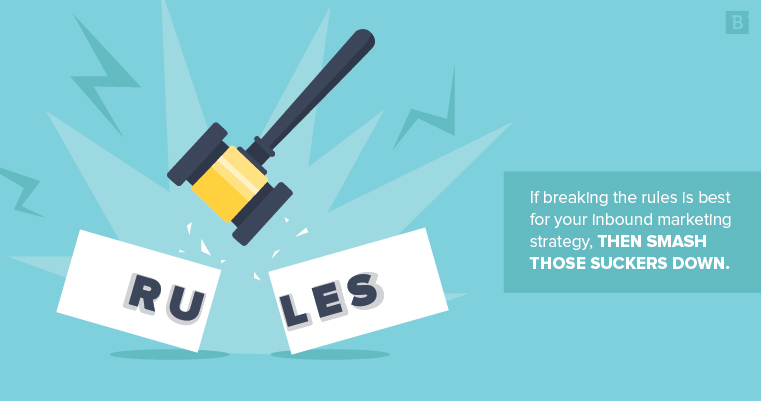 This, apparently, wasn’t working, so Be The Match decided to focus directly on the donors they wanted. The strategy they used was brilliant: They launched an inbound marketing campaign focused primarily on Reddit and Twitch.

If you don’t know much about these two websites, know that their demographics are mostly young men. Reddit is an online community where users can create forums centered on specific topics, and 67 percent of its community is made up of men. Sixty-four percent are between the ages of 18 and 29, while 29 percent are between 30 and 49. Twitch is a video platform made primarily of video game fans who, as you might have guessed, are mostly young men.

Already, we can see that Be The Match chose the right platforms for its inbound marketing strategy by focusing on websites where its target audience is likely to gather. The buyer persona for this strategy might have looked something like this:

Although the campaign also launched on Facebook and Instagram, Twitch and Reddit are particularly interesting choices because they often aren’t included (or even recommended) in marketing strategies.

Titled “Be the Guy,” the campaign aimed to garner donations by making men feel empowered, rather than appealing to their sense of sympathy or compassion. This strategy aligns with the research that found women are more likely to give. The study also concluded that men donate when the act of giving appeals to their sense of self.

Be the Guy was a whopping success, acquiring 17,974 new 1-8 to 24-year-old male donors (a 280 percent increase). The campaign generated 212 million social media impressions, leading to an increase in direct traffic of 970 percent.

The lesson: Know your audience. It’s okay to break the rules if their behavior goes against typical marketing guidelines.

The story: I’ve talked about American Express’ OPEN Forum before. Quick recap: It’s a resource for small-business entrepreneurs that has a ton of content. Its front-page articles are all relevant to entrepreneurs, and its events and networking features provide even deeper insights. OPEN Forum is a great example of what content marketing is supposed to accomplish: attracting and nurturing leads by providing information and thought leadership, then establishing connections with prospective customers.

But what makes OPEN Forum better than other company blogs? Well, like with most inbound marketing examples, it’s a combination of factors. OPEN Forum does a lot, and it does it all well.

A single article has a bunch of calls-to-action: to follow the author, to share the piece on social media, to explore an asset, to become a member, to browse more topics and to leave a comment. Here are just a few of the CTAs on an article about sales drops: 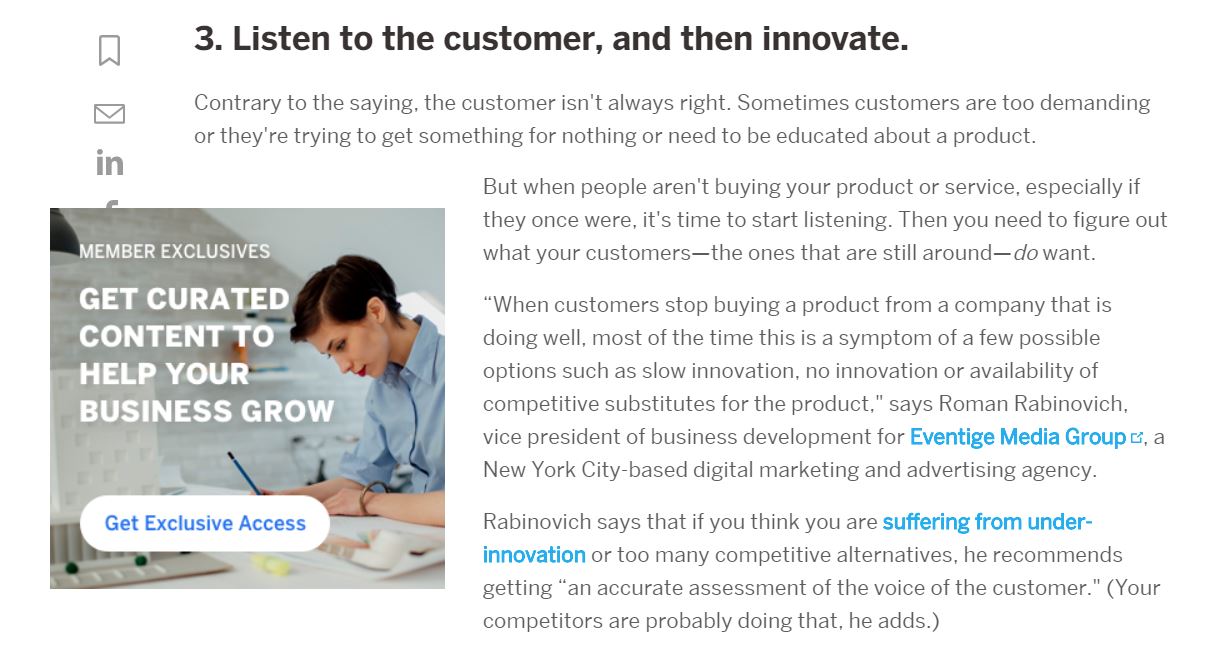 Click through to the piece, and you’ll see that none of these intrude on the content. They’re all placed very naturally, and their designs are unique and eye-catching without being annoying. The focus remains on the content, which is helpfully in depth and links to relevant pieces. Keywords aren’t the ultimate focus here; OPEN Forum knows that what matters most is relevance and content depth.

You know what this reminds me of? A library, or at least an encyclopedia. OPEN Forum has a ton of information, indicating to readers that it’s a great resource. If they have a question about their small business, the sheer amount of knowledge on OPEN Forum suggests the answer will be in one of its many blogs. If not, one of its members might, which is a great reason to join the community.

The lesson: Inbound marketing doesn’t always need to be hyper-targeted. In fact, it works well if you speak on as many topics that are relevant to your audience as possible. As long as your content is organized, it can attract a wide variety of potential customers and generate quality leads.

The story: It’s hard to imagine one of the world’s biggest software vendors struggling with marketing, but that’s what happened to Salesforce UK. The company’s search and PPC results weren’t performing as they used to – a situation no business wants.

So, Salesforce decided the solution it needed was content, and lots of it.

Now, that statement might make you think that Salesforce simply bumped up its blogging efforts to better capture search engine traffic and grab people at the beginning of their buyer’s journey. While that statement is true, the software company did so much more. A big bulk of its strategy involved interactive content like video and Slideshare. In fact, the latter involved creating a stop-motion presentation in the style of an 8-bit video game.

The Evolution of a Salesperson from Salesforce

They also remade a customer service story via sticky notes …

Out of Service from Salesforce

… and used Prezi to make a visually stunning story about the power of social media monitoring.

If you’ve looked through all of those slides, you might have noticed what made Salesforce UK’s approach so powerful: They’re all relatable, human-focused stories. The first example describes how selling has changed over time, but it uses nostalgia to endear people to the brand. (Did you see those Mario-like pipes? Awesome, right?)

The second is also endearing, but it uses bright colors, conversational language and tiny details (check out the doodles on the desk calendar) instead of video games. The words themselves also garner empathy, pulling us onto the side of a frustrated customer service agent.

Finally, the Prezi format is just fun to look at! It also conveys a lot of relevant information in a visually stimulating way.

Still, colors and video games are all nice and good, but this revamped strategy would be a lot of effort for nothing if it didn’t bring any results. So what did all of this achieve?

Clearly, you can have a lot of fun with your marketing strategy and see amazing ROI.

The lesson: Focus on the human aspects of your brand, and use media to tell stories in a unique, visually appealing way.

These are just three examples of awesome inbound marketing tactics out there, but they each have a lot to teach us. 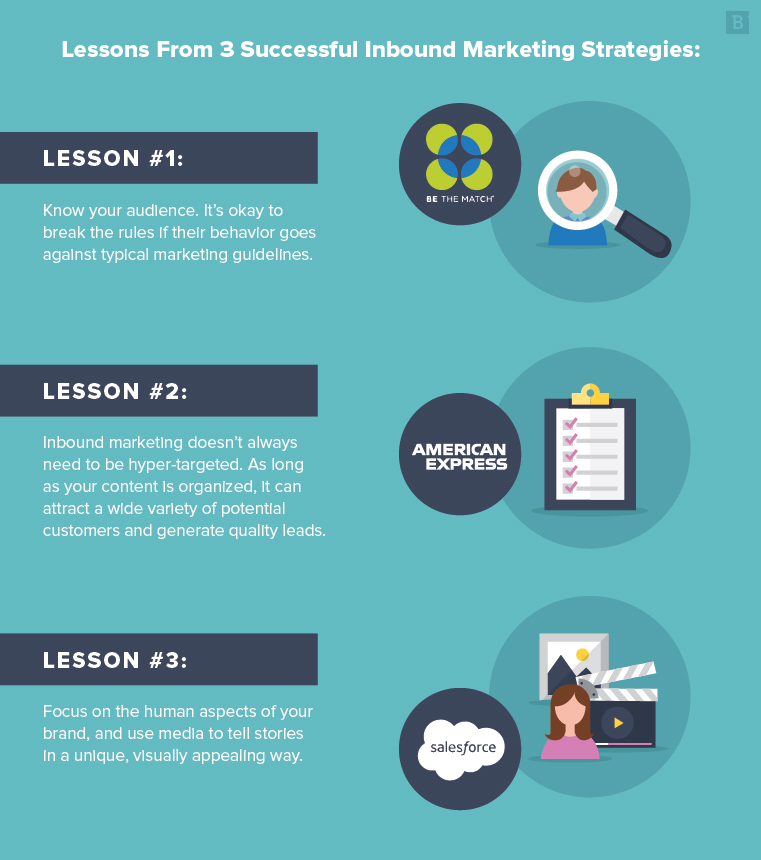 Be The Match showed how important it is to identify with your audience and meet them on their terms. Even though Twitch and Reddit aren’t typical primary choices for online marketing (most people would prioritize Facebook, Twitter, Instagram or LinkedIn), nor do they fall in line with traditional nonprofit outbound marketing strategies. Yet, those are the places where Be The Match’s needed market spent its time online. If breaking the rules is best for your strategy, then smash those suckers down.

Meanwhile, OPEN Forum is a great example of the importance of having an extensive library of useful content. The brand got to where it is by becoming the premier source for small- businesses entrepreneurs, answering every question they might have and then some. And thanks to its multiple calls to action, OPEN Forum can easily boost its newsletter subscribers, asset downloads and social follows.

Finally, Salesforce UK implemented a new content strategy that combined the best of both worlds, increasing its library while showcasing fun imagery and videos.