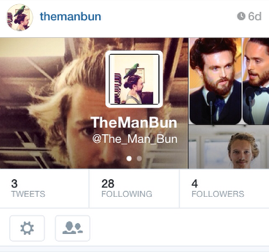 Over the past few months, Instagram and Twitter have helped me build the foundation for what I believe to be a very compelling argument – social media is extremely influential for branding, especially when hashtags are involved. Believe it or not, it all started with one small “bun” of an idea – #bunpun intended!

I would like to introduce you to the #TheManBun. Those three small words seem irrelevant, but boy, do they have a lot of gravity on the internet as of late! (Psst – thank you Jared Leto. Jared Leto’s ManBun at the Golden Globes turned the name into a household term.) Before getting into the power of hashtags on social, I think it’s important that you understand the story behind #TheManBun. With more than 150 million monthly active users uploading approximately 55 million photos per day, Instagram has proven its dominance over the social media kingdom in a few short years.

As a social media strategist, I look at Instagram, as not just another network, but a branding opportunity to reach fresh new target audiences. The interesting thing about Instagram is that you can make an account for ANYTHING, get people to follow it and interact with you. If Manny The Frenchie can accumulate 420,289 followers (Numbers at press time) for just being a cute dog that wears hats occasionally, I should be able to as well! More importantly, I should be able to translate the same approach to my client’s online strategies.

Using what I know about hashtags and social media, I decided to create a social conversation by launching my own brand. I opened my Instagram app to start an account and knew I needed something trendy, sexy and controversial – something that could potentially translate into a bigger movement if/when I was successful. Thus, #TheManBun was born! Mistaken for just another style of Hollywood elites, #TheManBun is actually a trending hairdo donned by eccentric individuals across the country. Do you disagree? Do you think #ManBuns are gross, or an extension of the hipster movement? Good! That’s the point of picking a topic like this – There are just as many people who want to tell me I’m wrong as there are who love the style.

How to start a social media movement

To make this experiment a success, I had to breakdown my efforts into achievable bits:

Building an audience online is extremely easy if you know what to look for. It all starts by finding accounts similar to your own. After you pinpoint these accounts, you can find out who is following them and start to follow additional accounts.

One of the most important qualities in a good follower: Activity. Don’t waste your time on neglected accounts. Creating a unique hashtag allows you to track all social conversations online that revolved around your company or brand. Websites like Tagboard aggregate the hashtag use across ALL social platforms. With this tool, you can identify your top contributors and then use this information to converse with followers and learn what interests them most. If you recognize what they are talking about, you can customize your online content and posts to fulfill that interest. This is what I like to call: “Building socially engaging relationships.”

The first step to really start engaging people in #TheManBun initiative involved finding the right people. I would search #ManBun on Instagram, and leave comments for people who were posting pics of their #ManBuns. We love your bun. #TheManBun and we’ll feature you on our page. #BunFun I would estimate that 75 percent of the people I contact respond to my direct request.

Let’s face it – the man bun industry is nothing to write home about at this point. But, although small, there is a community that follows this trend. I knew #TheManBun had stirred some interest when I was contacted by a competitor…..yes….a #ManBun competitor.

TheBroKnot confronted me in a very direct way – the page’s creator followed everyone that was following my #TheManBun account. The BroKnot not only reached out to me on Instagram, but Twitter as well. To defend my reputation, I posted a snapshot of our Twitter interaction on Instagram and asked our followers which name they preferred. This post distinguished #TheManBun as the dominant account on Instagram. However, the Broknot currently takes the cake on Twitter. While it introduced new challenges, this rivalry is actually a marketing gift. A little sibling rivalry will keep our fans on their toes.

Make the most of those “Now” moments

Like everything in life, there is only so much you can do to prepare before the serendiptous nature of the universe takes over. With the foundation built for #TheManBun, Jared Leto put his tresses into a bun for the Golden Globes as if he KNEW #TheManBun was ready for him. This was the time to shine, and with an archive of content about this hot keyword, the brand is on target for a bright future.

The same thing happens all the time in the business world because industry news never stops. Brand should be looking for trends that are relevant to their audiences and use these topics to create custom content. When the SEO world throws you a bone…don’t let it hit you in the face or drop at your feet.

Content marketing should be about making viewers feel something. Engineer a unique online hashtag to cash in on fun trends, engage the right audience and stimulate industry conversations.