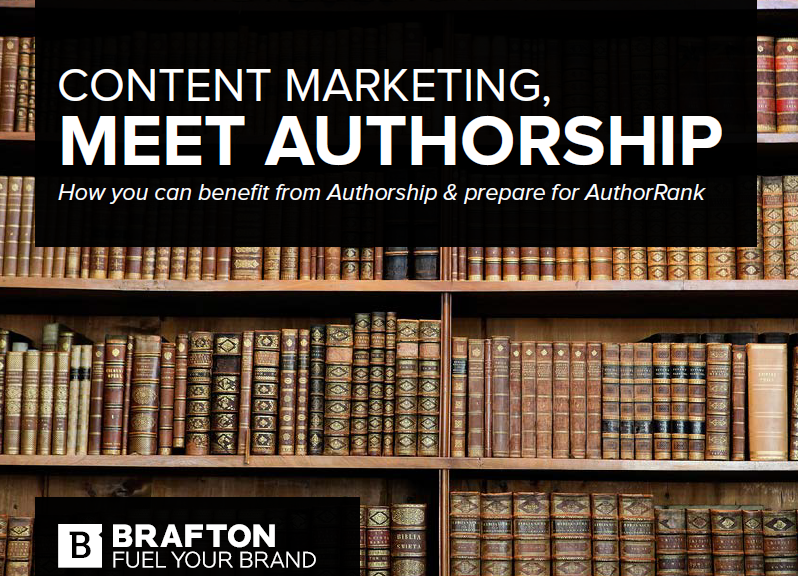 Throughout 2013, Brafton has continually tracked the rising importance of Authorship for online content creation. To inspire marketers, we provided six examples of publishers who are already doing it right and explained why it’s a best practice for internet marketing – it lends credibility and transparency to web content.

However, Authorship, and Google’s theorized AuthorRank technology, aren’t yet posing a threat to your brand’s position in search engine results pages (SERPs). Google’s Search Engineer Matt Cutts released a video, dispelling rumors about a new ranking that rewards or punishes web content based on authors’ credibility. So, there’s still time for brands to get on board!

We’ve created an “Content marketing, meet Authorship” resource and infographic to better explain Authorship and why we think it’s beneficial for SEO.

Download the resource here, and check out our infographic here.

Once a common ice-breaker, this question could become less important as people read fewer print materials in favor of digital content – a transition that is already well underway. Thirty-four percent of Americans say they learn about breaking news from websites first, and 31 percent abandon traditional news sources that let them down.

34 percent of Americans say they learn about breaking news from websites first, and 31 percent abandon traditional news sources that let them down.

The problem is that when internet users look for articles online, they don’t always know which sources deliver the most accurate and timely information. Readers can narrow it down based on the publishing website – The Wall Street Journal is better than About.com – but what about authors?

It appears Google has been building a solution to this dilemma, acquiring patents for technology that would (theoretically) allow the search engine to assign search rankings based on author-related signals.

Currently, writers can create digital signatures – AuthorBadges – that display their photos and bylines alongside headlines in SERPs. This is known as Authorship, and the benefits are multifaceted. Internet users can put faces and names to the content they regularly read, and writers get credit for the materials they publish. Google might also see this as an opportunity to create better user experiences because attaching authors’ names to content would potentially cut back on plagiarism and poor-quality articles.

Some reports have even found that brands using Authorship have seen better SEO results. Users are more likely to click on content with images, which means their attention will be directed toward news articles featuring authors’ photos, even if they’re not the first and second links in SERPs. Conductor recently found that search results serve more domains that use Authorship, indicating the tides have already shifted in the favor of transparent publishers.

Eventually, some internet marketers believe Authorship will turn into AuthorRank – a new system for assigning PageRank.

Instead of relying solely on backlinks, keyword use and SEO techniques, Google would hypothetically rank news content based on authors’ social media reach and popularity. Writers with large followings on sites (namely Google+) who publish content that is widely shared and endorsed by other reputable sources would be rewarded with favorable positions in SERPs.

While it might seem this technology would make it difficult for amatuer writers to gain traction on the web, Google’s search gurus beg to differ. Matt Cutts said this gives authors opportunities to create personal brands through their writing, creativity and insight.

Readers will begin to recognize which authors take the angle they prefer or tend to have the inside scoop on breaking developments in niche industries. Ultimately, this drives traffic back to brands’ websites and – as we all know – more site visitors and backlinks increases visibility in search.

No one is certain AuthorRank will ever come to fruition, but that doesn’t phase us. We think personal branding is advantageous for writers and businesses. It makes companies more recognizable online and it encourages authors to develop distinct voices that will make custom content catch clicks.

So what are you waiting for? Our resource shows you how to setup Authorship so your content can start getting the recognition it deserves.