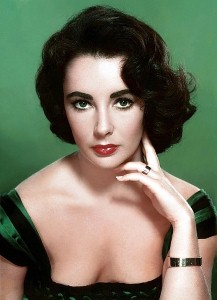 The entertainment world lost a legend this week – Elizabeth Taylor, an icon of the Broadway stage and the silver screen, passed away at age 79. She Online entertainment enthusiasts have spent much of the week searching for information about the late actress, who is survived by her two daughters, two sons, 10 grandchildren and four great-grandchildren.

Taylor was known for her roles in such classic films as Cleopatra, A Place in the Sun and Cat on a Hot Tin Roof. She was also a philanthropist and activist, dedicating much of her time to AIDS awareness.

Taylor was laid to rest in a quiet, private service on Friday, March 25. Her death is generating discussion across the internet – “Elizabeth Taylor funeral” was the second most popular search on Google Trends the morning of her funeral.

The vast majority of those tweeting about her service were discussing the fact that Taylor left instructions mandating that she arrive to her own funeral 15 minutes late, in true style.

“The service was scheduled to begin at 2 p.m. but at Miss Taylor's request started late. Miss Taylor left instructions that it was to begin at least 15 minutes later than publicly scheduled, with the announcement, 'She wanted to be late for her own funeral,'” a publicist for Taylor told USA Today.

In an homage to Taylor, theaters on Broadway will dim their lights tonight at 8 p.m., according to The Associated Press. In a second homage, a portrait of Elizabeth Taylor painted by Andy Warhol will go on auction in New York City on May 12.

Ms. Taylor's service took place soon after her death, as she was a member of the Jewish faith, which mandates that burial take place within 48 hours of passing. She converted to Judaism before she married Eddie Fisher in 1959.

Taylor had a list of husbands during her lifetime, which included Richard Burton, Michael Todd, Conrad Hilton and Michael Wilding. Her last marriage, to Larry Fortensky, took place in 1991 at Michael Jackson's Neverland Ranch.

Jackson and Taylor were close friends, and she was buried near the late King of Pop at the Forest Lawn Memorial Park in Los Angeles.

Their friendship and close burial was also the subject of much discussion among the internet media. A Google News search for “Elizabeth Taylor + Michael Jackson” retrieved more than 6,000 results at press time.

In other news from the industry, TV audiences are gearing up for finale season. The much-loved show Big Love, which followed the story of a non-traditional marriage, aired its series finale, bringing an end its five-season run. More than 16 million viewers watched the episode, which aired on Sunday, March 20. “Big Love Finale” was among the top 5 hot searches the following day on Google Trends.

The Office also aired a buzz-worthy episode – Michael Scott, the bumbling but lovable boss and protagonist of the show, proposed to his on-again-off-again romantic interest, Holly. After she accepted, he made the announcement that the couple will be moving to Colorado. At press time, “The Office proposal” generates nearly 2,000 Google News results, as the show's audience is left to wonder, “Will The Office ever be the same?”