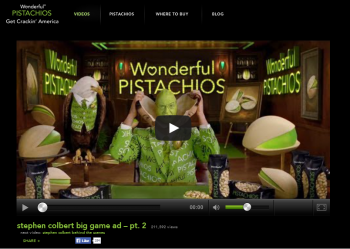 Every year, marketers tune into the Super Bowl to see what top brands are doing. Except for the winner of Intuit’s small business spot contest, most mid-level and enterprise companies are left wanting when it comes to the reach these 30-second ad spots score. Fortunately, for everyone else, there are threads of inspiration to be pulled from this year’s standout commercials that can be woven into organic content marketing strategies.

The pistachio brand must be familiar with the fact that short and sweet is the key to video engagement, because the company split its ad into two 16-second snippets.

In the first instance, the commercial seemed straight-forward, featuring Stephen Colbert (and a well-dressed eagle) at a desk. Colbert explained the product is so good it doesn’t need a catchy campaign to move product. It seemed the ad was over and an unrelated commercial came on, but before it had faded from mind, another Pistachio
clip came on that was even more memorable (if not creepy).

Sure, the brand clinched audience attention when Colbert splits his head open to reveal a tiny pistachio-like version of himself, but it was successful before this shocking scene. Why? Because the company tells an ongoing story – which Brafton has reported is the “most shareable” kind – and acknowledges that customers are still watching.

2. The Seinfeld commercial for… something? – Tell a familiar story

It turns out Seinfeld’s mini reunion commercial was for Jerry Seinfeld’s web series, “Comedians in Cars Getting Coffee,” but a lot of viewers looked at is an opportunity to catch up with their favorite characters. Admittedly, the subsequent social chatter certainly helped promote the webisodes even if the initial message was fuzzy.
There are two takeaways here:

3. Coca-Cola – Be a little provocative

Coca-Cola’s ad caught viewers’ attention with a rendition of the patriotic tune “America The Beautiful” with a twist. It was sung in a variety of languages meant to represent the country’s multi-national population and heritage. Whether viewers liked it, or didn’t – it caught their attention and got them talking.

They say that no publicity is bad publicity, and marketers willing to take the risk with semi-provocative content can generate buzz for their brands.

4. VW commercial – Do something fun

The Volkswagen commercial premise was both familiar and fun. What leads with a father’s attempt at being humorous, and a daughter’s dismissiveness turns into a sequence of VW engineers sprouting feathered wings every time vehicles reach 100,000 miles. Aside from the nostalgic references to classic Christmas movie, “It’s A Wonderful Life,” the commercial had striking visuals and funny moments when engineers were compromised by their new appendages.

But the ad also caught viewer’s attention because of what it was missing: Gender diversity. There was an obvious shortage of female engineers at VW that struck a nerve with attentive audiences.

T-Mobile’s ad was effective because it skipped the bells and whistles. With a bright pink background and white letters, the commercial was obviously missing actors, celebrities or cute animals. But it still told a story that spoke directly to the services it was promoting – mobile phone service without strings attached. It was memorable in its simplicity, its direct message to consumers and because it broke form.

This is a lesson that it’s not always the brand with the flashiest content that wins. Companies that understand what’s important to consumers can craft smart messages that perhaps don’t appeal to the masses, but speak to smaller pools of people who are more likely to convert.