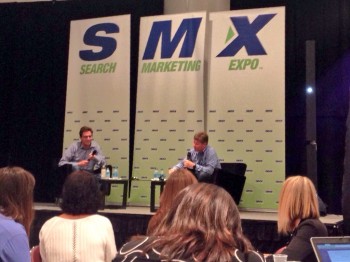 “So what are you doing for search? Does BuzzFeed think about SEO?”

At SMX East, BuzzFeed CEO Jonah Peretti was refreshingly real about what matters in web content for his brand – and search rankings are not on the priority list. It’s a model that might not work for everybody, but when 75 percent of BuzzFeed’s traffic comes from social, he’s apt to believe that his – and other websites – should focus first on what users want to engage. For BuzzFeed, traffic and results have followed ONLY because of its user-first approach.

“It’s easy to think the world operates the way YOUR network or site does,” Peretti said, admitting search may be a bigger focus area for companies that find it drives a lot of traffic. But at the same time he believes every site needs to prioritize good reads (or views). “Shouldn’t the best content appear, and it’s Google’s bad job if it doesn’t?

Here are some content marketing pearls of wisdom, and peeks behind the curtain of content creation, from the human behind the web’s most shared media outlet.

Creation has to start with genuine appeal to users, not a calculated check list of “what makes content work.”

Peretti warned marketers against spending too much time over thinking past success, instead of focusing on what’s next. “The human brain is great at telling stories in hindsight that are wrong.”

Viral content, he pointed out, only achieves the status of “viral content” after the fact. Creation has to start with genuine appeal to users, not a calculated check list of “what makes content work.”

On the right way to optimize content for search

Peretti called early keyword optimization at BuzzFeed a “happy accident.” It happened organically through thoughtful consideration of what information to include in content, or how to title pieces. “The closest approach to SEO we have is asking, ‘What would people look for in Google, or how would people search for this.’”

Brafton takes a similar approach; this content for SEO eBook is not what many marketers might expect, but instead offers actionable strategies on how to answer user queries throughout the marketing funnel….

While others may say BuzzFeed has a ‘clickbait formula’ on lock, Peretti maintains there are no silver bullets. Titles come from editorial consideration of what people would want to read. He also highlighted that anything which may be deemed clickbait has to deliver – that’s the difference between click-worthy content and spam.

While others may say BuzzFeed has a ‘clickbait formula’ on lock, Peretti maintains there are no silver bullets.

As for those, “You’ll never believe…” headlines, he said: “Don’t impoverish clicks with headlines that give the full story away, but more importantly, don’t be deceptive.”

On criticism of mainstream media for “going all-out BuzzFeed”

Any brand should be confident to share some light-hearted or accessible pieces without fearing the loss of all credibility.

The top metric Buzzfeed uses to gauge success is sharing. “It’s not the only one, but we view shares as a snapshot of what people thought was ‘good enough’ to pass on,” he said.

At the same time, he reaffirmed that his teams don’t pick apart the most popular pieces to create a secret formula that will be imposed on all future pieces. Instead, he advised content creators and marketers to evaluate high-performing posts, “By asking, ‘What’s the underlying dynamic happening, and how can I look at that with data?’ Use that approach to come up with more content that people really want.”

“We view shares as a snapshot of what people thought was ‘good enough’ to pass on.” – Peretti

He expanded on this idea, saying, “When people share cute kitten videos, they’re not interested in ‘the topic of cats.’ They’re interested in an emotion. We’ve always taken a social view to our analysis.”

(This led to a discussion of Dear Kitten, created by Friskies with Buzzfeed – and offering a model of brand storytelling (Warning: that last link includes some analysis of why it was so good… but by exploring the dynamic, not the details.)

Facebook is a big traffic driver for BuzzFeed. Peretti also relishes the recent Facebook updates to wean out clickbait headlines. “I think updates at Facebook better reward niche content. Now we have opportunities to create things for really targeted audiences.” He called it a “refreshing departure” from the traditional media model where publishers are encouraged to create content that appeals to 80 percent of the population.

On the connection between search and social for web reach

Peretti is an advocate for more social data influencing search presence. Perhaps this is not a surprise, since 75 percent of BuzzFeed data comes from social …

Peretti considers Facebook’s anti-clickbait algorithms a “refreshing departure” from the traditional media model where publishers are encouraged to create content that appeals to 80 percent of the population.

“So what do you think of Google Plus?” session moderator Danny Sullivan asked.

“Can you explain it to me?” Peretti asked.

“The greatest signal for Buzzfeed is when people see our content and want to share it. We want to serve an audience. In fact, a traffic reduction is OK if there are search or social algorithms that reduce clickbait, as long as it means more posts are getting a sustainable amount of traffic and shares instead of a small portion of posts getting those mega-hits.”

Would you ever be so cavalier with your SEO approach? Share thoughts in the comments – and be sure to check Brafton’s full SMX event coverage.