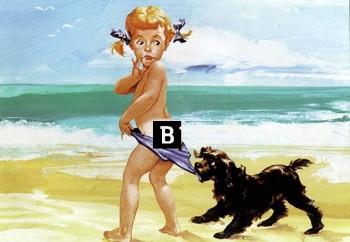 The most valuable part of social marketing is that it narrows barriers between brands and their customers. This phenomenon primarily gives businesses access to instant snapshots of user engagement and interest, but it also provides brands with yet more content to spark interest and drive conversations. In fact, much of the content derived from social interactions is more valuable than anything a company might create on its own.

When well intentions get rear-ended

There’s a fine line businesses must tread if they’re going to solicit submissions. According to WBTV, a North Carolina woman’s Facebook photo of her daughters at the beach caused a stir online and eventually led to a temporary ban from the network.

The image depicted one girl pulling down the bathing suit of another, slightly exposing her rear end. The girls’ mother thought that the image was reminiscent of old Coppertone sunscreen ads and published it on Facebook. She even posted it to Coppertone’s Facebook profile, which might ordinarily seem like a big user-generated content win.

However, the social network flagged the picture as offensive and took it down, temporarily banning the photographer from logging onto Facebook. Eventually, her privileges were reinstated and she was able to repost an edited version of the photo, but what started as an innocent dialog between customer and brand could have turned out very poorly for Coppertone.

As Brafton previously reported, user-generated content (UGC) is extremely compelling and persuasive for content marketers – particularly when it comes to Millennials. The young cohort of consumers consider UGC:

So there’s ample motivation for companies to encourage their followers and social connections to share images and post any type of UGC.

Who watches the UGC watchers?

This is a good lesson in UGC maintenance for social marketing. Brands that ask for submissions could end up with inappropriate content on their companies’ social profiles, where it’s public – and other viewers might not know it originated with users and not the brand itself.

It’s also possible for brand hijacking to take place. As the New York Police Department learned the hard way, hashtag developments don’t always go as planned. According to CNN, the NYPD wanted #myNYPD to encourage followers to recount times when they were grateful for the organization’s help. Instead, users manipulated the hashtag to remind users of controversies surrounding the NYPD.

The bottom line is that while UGC is an excellent way to increase engagement and create relevant and trustworthy content, it must be monitored carefully. Of course, if businesses are maintaining active social presences and responding to customer questions and complaints promptly, as they should be, they can catch minor mistakes before they become larger problems.