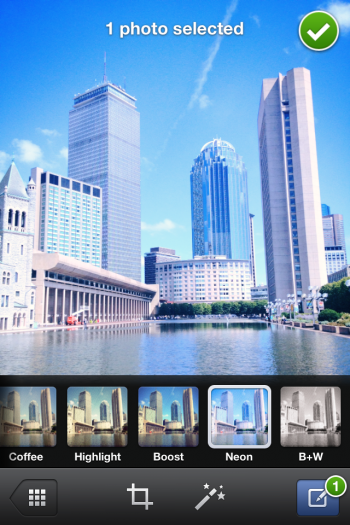 Instagram has become an immensely popular social media marketing platform with its ability to enhance the appearance of photos, making them uniquely cool. Marketers increasingly use Instagram to share customized visual content and increase brand awareness. Facebook recently overtook Instagram and has now added photo filters to its most recent iOS6 app update, which was released on Monday.

The New York Times reported that Twitter was developing filters for their photos uploaded through its mobile app, working to compete with Instagram. It appears that Facebook has beat the platform to the punch with Monday’s release. According to TechCrunch, Facebook did not detail it’s newest addition in its update notes, leaving users to discover the new feature on their own. Users are also able to upload multiple photos at once from their devices.

New photo filters and the ability to upload multiple images are useful to content marketers looking to engage users through a social media strategy. Because filters allow photos to enter the realm of the truly artistic, content marketing initiatives – even those updated while marketers are on the go – can capitalize on aesthetics through Facebook’s new feature. Twitter may add a similar feature in the near future.

Brafton recently reported on how many brands share images on Facebook, making the new filters an important addition. Consumers are less likely to engage with contents if it does not contain images, according to a study by Performics.