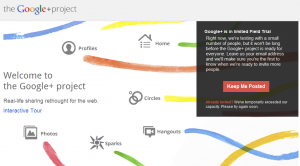 On its official blog, Google announced the release of its Google+ iPad app, which it said at Google I/O would soon be rolled out. The app is much-awaited for both and consumers who want to use the network on the go and marketers who want to reach mobile audiences more effectively through a Google+ enhanced social and search presence.

According to a report from Chitika, iPads still account for more than 90 percent of all tablets available in the United States, so an app that offers access to iPad users can help Google increase traffic to the social site.

Google reported that the app comes with full Google+ capability, including the recently released Events feature. Allowing users to interact with the entire network will help social media marketing campaigns on the platform appeal to more users.

Marketers using Google+ to drive traffic to their websites may see growth in ecommerce activity given increased purchases from tablet users compared to general web population. Brafton recently highlighted data from Forrester and Shop.org, which found that 49 percent of orders from tablets are higher than the average order cost on different websites.