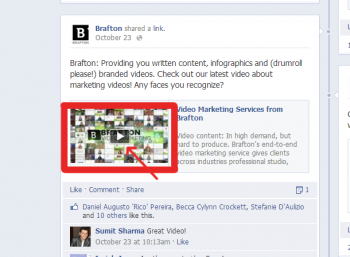 The bulk of a content marketing budget is often allocated toward written content, but other media types also provide favorable return on investment. Video, for example, has expanded and infiltrated marketing strategies across the board, and its sharable nature makes the visually appealing option an attractive avenue for brand exposure and lead generation.

In comScore‘s latest Video Metrix report, 181 million U.S. internet users were found to watch more than 39 billion online content videos in September 2012, with Facebook named a top five viewing platform. Americans watched more than 233 million videos on the social network. Of the 39 billion videos watched, video ad views totaled 9.4 billion. These ads were watched across various platforms and reached 51 percent of the total U.S. population an average of 60 times during the month.

With a higher percentage of online consumers engaging with social video, content marketing campaigns must take advantage of the social nature of visual media by developing opt-in videos and sharing them across their networks. According to eMarketer‘s Social Video: The Next Wave in Digital Advertising report, marketers are starting to move away from the 15- or 30-second pre-roll ads toward more engaging video content that internet users choose to view. This branded visual content is educational and informative, and the media is designed to be consumed and shared in a social manner.For professionals who understand the value of content marketing, video may seem like an entirely different practice. However, the power of video and its ability to integrate seamlessly into social platforms helps improve digital outreach as a whole. Visible Measures recently released its Q3 2012 Social Video Advertising Report, which found social video viewership is up 15 percent from Q2 2012, and it’s grown more than 75 percent over Q3 2011.

The eMarketer report says that in some cases social video sharing results in ad campaigns exceeding their preliminary target audience, making it easier to generate a higher portion of new leads. Visible Measures reports user-initiated, English-language social video ad views served on its network reached 1.33 billion in Q1 2012 – a 77.6 percent quarter-over-quarter uptick. As content marketing evolves to include new media, businesses have new opportunities to design branded content that resonates with their ideal audiences. Video marketing is another way to diversify a content portfolio, and when visual content encourages social sharing, response rates may increase exponentially.