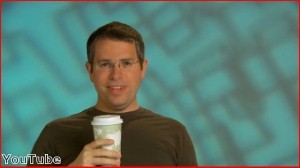 Marketers know they can turn to Matt Cutts’ Google Webmaster channel on YouTube to find answers for their Google search rank queries, but a recent video was served with a side of giggles while the head of Google’s webspam team sipped a caffeinated beverage. The relatively simple question seems to have been an inside joke, but some commenters are taking it quite seriously.

In the YouTube video, "Land Lubber" from Colorado asked if domains registered before 2004 are held to older (and easier) standards when it comes to page rank. The usually composed Cutts starts giggling, while notably sipping coffee from a cup featuring an image of the world.

He answers the question – no, older domains do not help page rank. But he laughs his way through the response, citing "conspiracy theories" and "crazy SEO theories."

Cutt’s uncouth demeanor is leaving some suspect of the validity of his response. One commenter seems to interpret his giggles as nerves, saying, "He’s lying… I can tell."

Others seem to think the silly answer is a response to a silly question, and they’ve shared silly comments of their own. Commenters suggest Matt is drinking "link juice" or "Goffee" – Google Coffee.

Another asks, "is the drinking of the coffee a coded message?" Many marketers may have to deal with remaining on the outside of this inside joke, but they can take his coffee-sipping as a reminder that Google (like Cutts) now runs on caffeine.