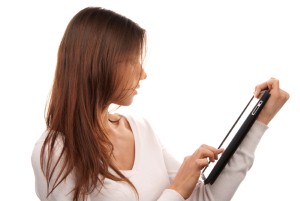 A new study from research firm IDC found that media tablet sales dipped in the first quarter of 2011, but estimates for the entire year remain strong. This indicates the time is ripe for businesses to expand the efforts from traditional online marketing campaigns to ones that incorporate mobile content marketing as well.

According to the report, global shipments for media tablets slipped 28 percent on a sequential basis in the first quarter of 2011. This decline is largely due to strong sales during the holiday season of 2010, as well as overall economic conditions.

Nevertheless, the introduction of new devices, coupled with the growing enthusiasm for mobile technology, is expected to lead a rebound in the burgeoning tablet market. According to the report, tablet sales are predicted to reach 53.5 million units by year's end. This is an increase from the firm's previous projection of 50.4 million units.

Like smartphones, tablets have changed the way consumers interact with online content. These days, consumers are more likely than ever to use their mobile devices to browse the web, a trend that has opened new marketing opportunities for businesses. As Brafton recently reported, a new Net Applications study found Apple's iPad now accounts for 1 percent of global internet traffic. As more devices hit the market, this percentage is likely to increase and web browsing habits will shift further.