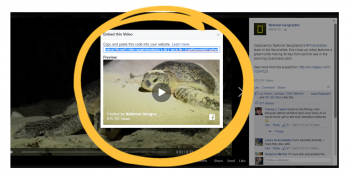 Videos posted to Facebook can now easily be embedded onto other websites, Facebook announced at its annual F8 conference last week in San Francisco. This new ability could offer an easy alternative for brands to create a cross-channel video strategy.

There are several reasons why the option to embed Facebook videos could work in a brands’ favor:

It’s surprising this feature hadn’t been implemented before, given the popularity of videos on the social network. Facebook’s manager of product marketing Deborah Liu said at the event that roughly 3 billion are viewed every day (we think this large figure might be in part because Facebook automatically plays them when users scroll by.)

The introduction of embedded Facebook videos across the web could be viewed as an increase in the competitive stakes the social network has on YouTube. Since YouTube surpassed Facebook in July 2014 as the most populous social network, Facebook has taken great strides to promote its video product offerings – and the latest development is sure to have significant impact on brands and publishers creating videos for multiple channels.

Now, for users to embed a video from Facebook, they simply can click the “Options” button located on the video they’re interested in, and find the embed code. From there, it can be shared on other social networks, blog posts and landing pages.

Videos boost engagement: Facebook is far and away the most popular choice for personal video distribution, but it’s an engagement booster for brands as well. Take a look at Cosmo. The magazine’s Facebook page saw a 200 percent year-over-year increase in engagement, and shares of videos were 53 percent higher than regular social media content.

Easier customization and timing: When you’re publishing video content on Facebook, you can customize publishing times based on when you know your audience is active. (Quick tip: 25 percent of all video content is viewed on one day of the week: Friday.)

YouTube is the most successful network for driving conversions. It’s the top destination for Millennials to learn about products, and with Google in its corner, sharing videos on YouTube can be the most beneficial option from an SEO perspective. We reported in July that video rich snippets were disappearing from SERPs, but YouTube videos were more likely to stay. Per SEOlytics data, YouTube’s ownership of Google SERP rich snippet real estate grew from 46.7 percent to 74.8 percent that month.

At Brafton, we’ve seen firsthand results from revamping our YouTube campaign. Check out the results here.