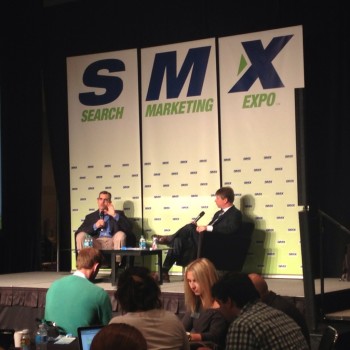 Building an organic social media marketing campaign is the right way to get started on Twitter, but when brands want to amplify their presences, they should move into the ad platform, advised the network’s Vice President of Sales Richard Alfonsi during SMX East 2013’s keynote speech. Not surprisingly, the Sales VP promoted the network’s ad service, but he also shared plenty of insights for any Twitter marketing effort.

From top to bottom These results are great, but Twitter wants to help partners move users toward the lower funnel, too. With that in mind, Alfonsi shared a more conversion-focused stat:

He also highlighted new products such as Lead Generation Cards that can track social engagement and opt-ins as people move through the funnel. Additionally, Twitter is working with CPG players to bridge the gap between online Tweets, engagement and offline sales.

Twitter as a second screen: Cross-platform and TV engagement

Alfonsi reported Twitter plans to continue building the connection between TV and Tweets. Already, 95 percent of TV conversations happen on Twitter and the network intends to help marketers insert their messages into relevant real-time discussions.

Enter Twitter Amplify: A product that helps connect Twitter and the TV world. Verizon, NFL and other brands are already using this tool to push brand content right to Twitter feeds as live programming airs, establishing solid connections with the TV world. Although Alfonsi shied away from the a question about whether this keeps live TV relevant in a world of on-demand streaming, he said that Twitter conversations can add dimension to events (e.g. The Emmys, the SuperBowl, etc.) by helping viewers share their experiences. Twitter’s television-ad targeting also enables advertisers to reach wider audiences on their second screens during live TV. There are even benefits hanging in the balance for marketers of smaller businesses by allowing them to get targeting data about their online audiences.

“Twitter amplify helps marketers get more mileage out of their content,” said Alfonsi. “[For instance, the] NFL can Tweet out a clip from the NFL handle and promote that to reach followers who don’t follow the NFL.”

What’s the future of ads?

There are three key ad trends that Twitter recognizes will gain prominence in the future, and it’s built products to supported them.

As mobile tech dependence continues to rise, marketers will need agility to capture on-demand opportunities. More, quality is becoming increasingly important in the search and social worlds, and ads must enhance the overall user experiences to drive ROI.

Twitter separates itself from other social networks by restricting the number of characters allowed in posts, but also in its ability to cultivate “Now” moments. “Now” moments happen every day when people connect to speak about things happening in real-time.

“[It’s all about] finding people in the right mindset at the right time with the right message. We’re giving marketers the opportunity to tap into those conversations,” said Alfonsi.

“[It’s all about] finding people in the right mindset at the right time with the right message.”

Some examples of brands that have been successful in capturing these moments:

– A restaurant responding to a person’s Tweet about being hungry with an ad or offer.

– An outdoor company replying to users’ conversations about going camping over the weekend.

– Oreo’s ad during the Super Bowl blackout (which garnered more accolades and attention than the multi-million dollar commercials that aired during the actual event).

How do marketers capitalize on “Now” moments?

Any company with a Twitter profile can take advantage of the network’s reach to amplify social media content and support their bottom-funnel goals. Here’s how:

People search on Twitter a lot, but they don’t approach social queries the same way they ask questions on traditional engines. As Alfonsi said, “Search keywords are about long-term memory, while Twitter keywords are about timely conversations.”

Brands don’t have to be selling products “now” in order to benefit from Twitter, Alfonsi explained in response to an audience member’s question about how the site works for events-focused companies.

“Use smart keyword targeting around the events to build interest now for something that’s coming up.”

“Use smart keyword targeting around the events to build interest now for something that’s coming up,” he advised.

The idea is to draw in target customers and create conversations that will compel people to participate. A well-placed ad can reach target audiences when they’re in need of products and services immediately, or invite them to engage over time until they are ready to convert.

Of course, organic campaigns can achieve the same result when marketers stay at the pulse of relevant conversations and offer helpful insights.