What brands can learn from Coca-Cola, as company hits 50 million Facebook Likes | Brafton 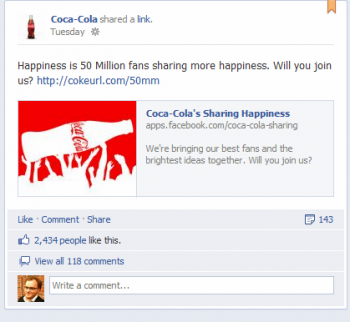 For most companies using social media marketing, the channel can help level the playing field with even their largest competitors. Coca-Cola’s recent announcement that it now has more than 50 million Likes on Facebook could help some businesses inform their own strategies on the social network.

Along with its announcement of the milestone, the soft drink giant has launched a campaign aimed at “making the world happier.” Users that Like the Page will see a prompt for a new Facebook app from the company that calls on fans to discuss the ways they plan to spread good feelings in their community. Ultimately, this concept has nothing to do with selling soda, but brand engagement through social innovation has helped make Coca-Cola one of the premier global brands on the web.

“Throughout its history, Coca-Cola has always had a role in bringing simple moments of happiness to people around the world every day,” Joe Tripodi, chief marketing and commercial leadership officer for the company, said in a release. “Today, we have an engaged global community of more than 50 million strong through Facebook. This provides an opportunity to engage our most supportive and enthusiastic fan … to make the world a happier place.”

Connecting directly with fans and sparking conversation is just one way Coke has worked to improve its reputation and brand. According to Sheryl Sandberg, chief operating officer of Facebook, Coke’s commitment to creating effective new social strategies has helped the company become a strong influence for social marketing. Moreover, companies of all kinds can learn from Coca-Cola to make social strategies about more than just selling.

“Coca-Cola understands the value of communicating directly with its most ardent supporters in an authentic way that helps make the world more open and connected,” Sheryl Sandberg, Facebook’s chief operating officer.

“Coca-Cola understands the value of communicating directly with its most ardent supporters in an authentic way that helps make the world more open and connected,” Sandberg said in a release. “This new program is the next step in fan culture, and we are glad to support Coca-Cola in this effort.”

Last year, Brafton highlighted a report from Covario that found Coca-Cola’s success on Facebook is due to its use of effective storytelling on the platform. Essentially, the company uses its social content to elicit a message in its fans that helped them associate positive feelings and experiences with the soft drink. Moreover, Facebook has since launched Timeline to all users, which it says is aimed at helping users and social marketers turn their profiles on the site into storytelling platforms.

Check out more insights on social and content marketing from Coke in Brafton’s coverage of its three steps to success from last year’s ad:tech New York.