It’s a rare occasion that Jeff Baker and Francis Ma look soft, wishy-washy or milquetoast in their outlook on the digital marketing landscape, prone as they are to hyperbole and renegade rants.

That’s why a recent guest appearance from Nick Eubanks, head of Philadelphia-based agency From the Future, was at once humbling and refreshing. In providing perspective on market movement and boldly proclaiming his barriers to entry for new business prospects, Eubanks left the normally bombastic Baker and mumbo-jumbo-spewing Ma – dare we say – mostly muted throughout Episode 208 of Above the Fold. 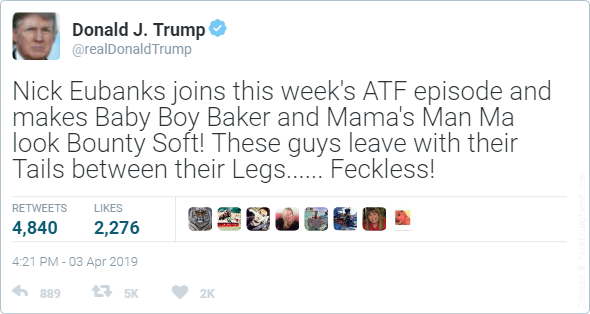 Before getting into it, though, Jeff regales us with some of the early takeaways from his current Colombian adventure. He’s working remotely alongside a group known as the Wifi Tribe, which Francis astutely notes sounds a lot like a cult, as part of his ongoing battle with hermetism. The trip began, Jeff admits, with the realization that he booked his flight an entire week earlier than intended. Upon discovering his inexcusable and entirely self-inflicted blunder, he simply ate the cost and rebooked a separate early-morning flight, not even bothering to call the airline.

On the upside, the coffee down there is amazing, he says, nothing like that swill they drink in Boston. This segue affords him the chance to regain the upper hand on Ma by taking a cheapshot at his fellow chowdaheads’ Budweiser- and Dunkin’-drinkin’ ways.

Everyone there with him is a remote worker, and there’s some interest in joining future podcasts. He goes on to provide zero reassurance that he hasn’t joined a cult: “They’ve done a really good job of getting people to join up – everyone’s personality seems to fit together really well.”

You sure that’s coffee they’re passing around Jeff?

Nick is introduced, naturally, as a guy from the future, a place where he says “everything ranks with a single link” (and not without a hint of Philly in his voice).*

*The Hawk will never die, Nick.

Jumping off from his blog post on premium pricing that caught the guys’ eyes, Nick explains that despite their efforts at relatively unprecedented transparency, FTF has found that people still don’t believe their upfront RFP investments are real. Too often they still engage with people who aren’t on the same page.

Companies will come in expecting 10 hours of work before a deal is done. Those are “likely to be shitty clients,” Eubanks deadpans, so even if perhaps it’s lost business, so be it. He’d rather make public what exactly that investment goes toward and why they’re justified in increasing their minimum-engagement costs further in the not-at-all-distant future.

Fifty percent of FTF’s headcount is on the SEO team, and as he sees it, there are only a handful of agencies who can do site audits at the sort of scale they do.

Francis tells him he’s their hero for telling potential clients to piss off to their face. Jeff plays the back-in-the-day card again, saying it didn’t use to be this way. Nobody expected in-depth audits or technical analyses just to get in the door.

“The market has become so saturated,” Nick says, while keeping some of the more smile-and-dial-oriented offenders in the space nameless. “So the average business owner [is] getting the same phone calls from the same companies every day, with the understanding that everybody has SEO, so if it’s all the same … it’s a race to the bottom. Who can I push back on to get the cheapest service from?”

This mentality – and the dynamic it’s perpetuated – is nothing new to industry veterans like our long-toothed hosts. But over time, Eubanks notes, it’s forced many agencies to draw a line in the sand and say ‘We don’t want to work with unsophisticated clients.’ Even partnerships that begin with a clear vision and the best intentions can run afoul over time.

“Sometimes you get handed down the chain to a point of contact who doesn’t understand what they’re doing and asks for a variety of things out of scope.”

But, he explains, he’s now at the point where he feels more empowered to have those “we stay in our lane” conversations – conversations more agencies ought to be having.

This is followed by a long pause, as Francis fumbles his pen and Jeff jots down notes before uttering a nonsensical platitude about “needing to educate them on what makes a good blog post.” Nick seems unimpressed by this insight, and we plod forward.

Commiserations on crappy client experiences eventually lead to Eubanks schooling our guys on a series of important distinctions – chiefly, what constitutes a “competitor.”

Just as Taco Bell is unconcerned with what Taco John’s is offering, or the New York Mets can’t sniff the Phillies until they win a 21st century championship, agencies too should be more discerning in their discussions of apparent on-paper similarities.

It’s okay to say “we do different things” – that doesn’t make your company dismissive or arrogant, just realistic. And if a potential client feels an orange agency is truly a competitor to their apple, well, as far as Nick is concerned, they can go work with the orange or lemon instead. FTF requires a six-month engagement primarily because that’s the sort of sample size necessary to generate real momentum. Typically, the first three months are devoted to research, analysis, data and acquisition, and it takes about 90 days to get the first data-driven changes made. In all, it takes five or six months to get stuff live and give it a chance to prove returns.

Of course, client expectations can be directly correlated with cost. Just like a $60 blog post will be “stream of consciousness pile of shit” (Nick’s words) or something Jeff wrote (Francis’ words), it’s human nature to expect great service with a higher upfront cost to play ball.

Inevitably, Nick acknowledges, there are still situations where things creep out of scope. You can guard against this by trying to spread projects out over the course of six months, running multiple processes in tandem, but a lack of frame of reference will always prove problematic.

“That’s how you get a multimillion-dollar company complaining about a $50k site redesign,” he says.

Jeff feels there are three different “buckets” of clients. There are smaller organizations who put all their trust in external vendors, knowing that they just don’t know, and therefore need to outsource their content and consulting needs. They’re generally easily satisfied and great to work with. There are larger clients who think they know everything, but understand from a cost perspective that hiring in-house personnel to perform each of these disparate tasks would be prohibitive. They can be a mixed bag, often depending on the level of sophistication, for better or worse, of one key stakeholder or decision-maker.

He never mentions a third bucket, but context clues tell us they’re the ones with whom the fundamental knowledge gap is most glaring. They simply don’t understand what’s being – or what needs to be – done.

Nick notes that one subtle but good indicator of a lousy client lies the distinction between “blog posts” and “blogs.” Blogs are, in essence, collections of content. If you’re using the term to refer to individual posts, it’s like calling GZA the Wu-Tang Clan. The latter is a collection of talent – the former being the individual wordsmith behind such existential queries such as:

Why is the sky blue? Why is water wet?
Why did Judas rat to Romans while Jesus slept?

The more discerning prospects also understand it shouldn’t cost what it would to hire in-house people for the same full-time, full-service deliverables. Nick feels an acceptable ratio is something like 1:10. But the market as a whole needs to better understand that, depending on industry niche, “expertise” can be a fleeting pursuit.

Jeff agrees, explaining that it’s really hard to find outside “experts” equipped to write for a field like, say, innovation licensing, because those people are doing these things, not writing about them. Once again, sometimes it’s best for all parties involved to simply recognize an imperfect partnership.

FTF has begun to do exactly that, and Ma asks if Nick wants other agencies to follow suit.

He says he would love more agencies to start charging more, stemming the commoditization costs. If prospects are routinely told what exactly the dollars go toward, they’ll come to better understand the behind-the-scenes grind, and in turn, the playing field will be leveled. He has a specific plan for where they’re going, targeting a hyper-specific segment of the market, and in fact has designs on capping their client list.

The trade-offs may be occasional sticker shock and mutual agreements to go separate ways. But a more saturated marketplace ought to be, with time, a more sophisticated one. And when that takes shape, the content creators who know their identities will be best positioned to capitalize.

“You’re not considering the possibility that I’m just an idiot.”