The hope of lightning striking twice is too enticing for moviemakers to ignore. It’s a drug.

That’s why the silver screen is painted and repainted with the same trilogies, sequels, spinoffs and reboots. One could think that Hollywood hasn’t had a single unique idea in the past decade, despite being a supposed hub of creativity and cinematic expression.

And that would be true to an extent. While Tinseltown is crawling with the finest in theatre, drama, comedy, scriptwriting, videography and costume design, the power brokers gripping the purse strings – the major studios – have scaled down their output in recent years.

In this eBook we look at why this trend has occurred, why it has resulted in fewer movies (but more remakes) and how content marketers can model their own digital production efforts after this phenomenon.

As a case study, 2019’s Oscar winner for Best Original Song went to “A Star Is Born,” starring Lady Gaga and Bradley Cooper.

A trusty reboot assuages investors’ worries and builds upon an existing pathway toward financial success.

Who would’ve thought that Generation Z would be watching the same movies as the Silent Generation? Well, literally every producer in Hollywood would – because the tried-and-true formula of repeating past successes decreases risk for studios.

It costs more than $100 million to make a major motion picture, a lot of money to risk on an untested, potential flop. But a reboot, a trusty reboot, assuages investors’ worries and builds upon an existing pathway toward financial success.

Fewer people buy movie tickets today. So it makes sense that full-length nationally released films would be fewer and far between relative to decades past.

Conservatism as a strategy

Piggybacking off remakes and revivals produces a documented track record of measurable metrics. And that’s what producers and investors want, some sort of assurance their money will be returned to them safely – hopefully more than they put in. This approach to investing is a simple baseline strategy irrespective of industry.

Of our top 10 best-performing blog posts of 2018, 60 percent of them were re-optimizations.

It’s also the approach digital marketers should be taking. We’re not saying stifle your creatives or refrain from taking chances, but we are saying that if your job is, at the end of the day, to report ROI on the totality of your department’s efforts, then you’ll need to register sustainable wins you can plan for and benchmark against.

For instance, of our top 10 best-performing blog posts of 2018, 60 percent of them were re-optimizations of older posts. We know what worked, we tweaked them to make them even better and we relaunched them to even greater success.

Marketing as a revenue center: What happens when ideas meet economics

All of this boils down to the fact that, in 2019, marketing isn’t just tasked with intangible objectives like brand exposure and thought leadership. It also has to facilitate sales, and must generate revenue.

As Content Marketing Institute’s most recent industry reports attest, B2B and B2C brands alike (41 and 44 percent, respectively) are looking for their content marketing teams to produce cold hard cash for their bottom lines. Reboots are a way to do that.

Consequently, it makes absolute sense for marketers to capitalize on projects that have, on paper, resulted in ROI for their companies, especially if that’s all that CEOs are grading them on. What this means is that brands should be focusing on marketing assets that are more closely tied to sales enablement. In other words: downloadable, mid-to-bottom-of-the-funnel content. 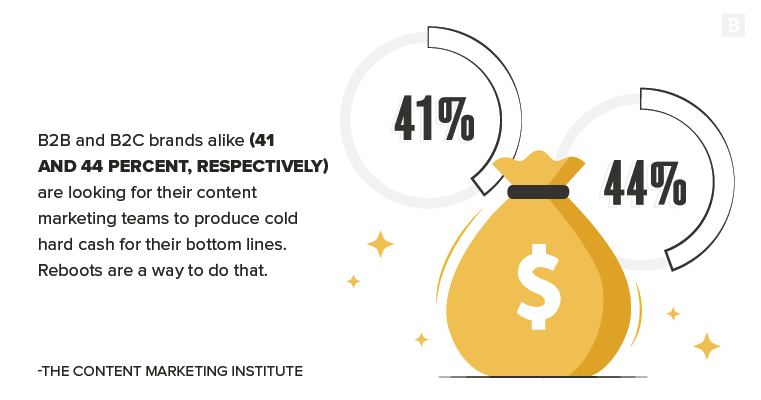 Content that’s closer in the funnel to cash (closing sales) is where actual ROI lives. Repurposing existing content into polished, versatile assets can turn an ordinary blog post, for instance, into an eBook cash cow.

The trend toward reboots in the film industry runs adjacent to the growing re-optimization movement in content marketing, an undertaking we’ve excelled at over the past two years.

These concurrent episodes are symptomatic of a growing number of media available to consumers as well as the waning amount of time they’re willing to devote to entertainment inputs that don’t meet their needs quickly enough.

As average human attention spans have dwindled to eight seconds, those precious eight seconds are simultaneously bombarded with enormous consumption options across numerous devices. Think of the year 2000, where we lived in a world dominated by television, film, newspapers, brick phones, radio and billboards.

Reviving older content and repackaging it for a modern audience allows marketers to go back to the well whenever they need.

Fast forward to today, and we are now able to choose our preferred media formats and filter out everything else that doesn’t reinforce those preferences. We have podcasts, live streams, on-demand video platforms, tablets, smartphones, laptops, news aggregators, e-readers, email, social – oh and we still have many of the early-aughts media hanging around too.

When accounting for the fact that there are algorithms and data-collection companies cookie-ing and tracking our every online movement, commodifying our behaviors is quite easy.

Reviving Star Wars is easy – there’s so much data and generational history propping up that decision. The same goes for re-optimizing on-page content, whether that’s blogs, landing pages, gated assets or video.

With appropriate analytics tracking codes, marketers can, in real time, measure the performance of every piece of web content they release into the wild, then tweak, adjust, build upon those same content assets to enhance and enrich their performance even further.

Here’s a quick blueprint for doing just that:

Based on our own research, we’ve found that content takes about 100 days for it to fully mature. That means it will be three to four months before your content will settle into its natural position in SERPs. More specifically, the average content that appears on Page 1 of SERPs is 145 days old.

We note this because results are not guaranteed, and they are not immediate. That’s not how Google’s algorithms work, and it’s not how consumers engage with and experience media.

Reviving older content and repackaging it for a modern audience allows marketers to go back to the well whenever they need. The impetus isn’t churning out new ideas every day. The goal is to find what worked and magnify it as much as possible.

Once a piece of content lands on Page 1 of Google, particularly in the top three positions, it will continue to accrue more backlinks, authority and positive on-SERP signals. This is true for as long as your page continues to offer searchers the best content experience.

Creating evergreen content – and then continuously updating it – is a profitable mechanism for wringing every last bit of ROI from your content marketing.

If in six months, or six years, your post is outdated, lacking engaging imagery or littered with broken links – because you didn’t monitor its value or optimize it at any point in time – you can expect it to drop off of Page 1 (perhaps further) with a fair amount of certainty.

That’s why creating evergreen content – and then continuously updating it – is a profitable mechanism for wringing every last bit of ROI from your content marketing. Many marketers interpret evergreen content to mean “set it and forget it, because it’s always relevant, right?”

Sure, audiences are still watching a version of “A Star is Born” 87 years after it was originally created, but only because it has been readapted with a predictable cadence over these past eight decades. It has staying power – it is evergreen – because of its modernization.

We’ve talked a lot about movies here. And while I was most satisfied with The Favourite (and so was the Academy), it was a familiar reboot that bestowed innumerable lessons for marketers.

Luckily, a re-optimization campaign doesn’t necessitate best-selling pop artists or perfectly tan, scruffily manicured actors. If you’ve got a semi-decent archive of your content, Google Analytics and subscription to an SEO tool, you can revive and re-release content for mass appeal.

We can’t promise BAFTAs or appearances at Sundance; ranking for high-value keywords will have to do.

Once you achieve that, host your own Dundies or something. Congratulations.

What is Google Tag Manager? An intro guide

This guide will take you through the Google Tag Manager account setup process all the way to publishing tags live on your site.