Welcome to the Content Marketing Weekly: your one-stop shop for everything you need to know about content marketing before Monday.

In this latest edition we’ll take a look at some breaking news in the search and social worlds, intriguing results from surveys that could point the way forward, as well as an expert look at the revolution in behavioral marketing.

So grab your favorite beverage, strap in your office chair seat belt and let’s get rolling. 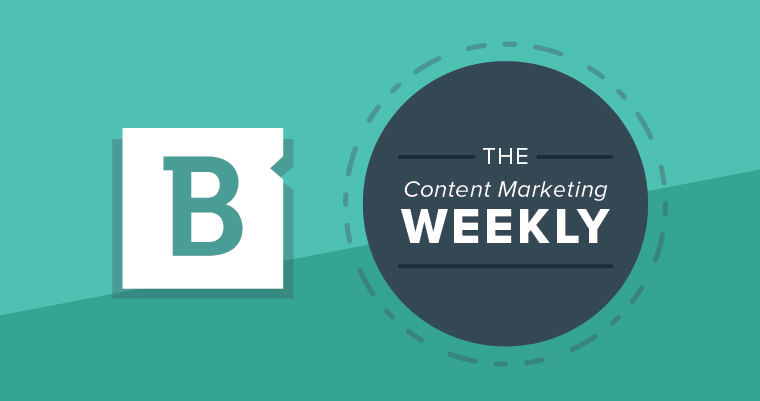 Google to Close Google+ After 7 Years: A Look Back at the Impact It Once Had on Google Search

While it never ascended to the heavyweight status of other social platforms like Facebook, Twitter and LinkedIn, Google+ was — believe it or not — still chugging along in 2018.

However, Google has decided to finally pull the plug on its lagging online network. While low use and engagement certainly played a part in spelling doom for Google+, much worse and more consequential was the recent news that personal information for 500,000 site users was left vulnerable due to a bug with associated developer apps. While the search giant announced it had found no evidence of data misuse, it nonetheless said it was winding down Google+ for consumers over the coming 10 months.

What does this mean for marketers? Well, truth be told, not a whole lot. If it was Facebook or Twitter throwing in the towel, then it’d be a different story. The reality is Google+ simply lacked reach and effect: Ben Smith, Google Fellow and Vice President of Engineering, mentioned that 90 percent of user sessions lasted fewer than five seconds.

Yet Barry Schwartz at Search Engine Land has an interesting look at the legacy of Google+ and its influence in the search marketing world. For instance, +1 buttons — just about omnipresent these days — were first introduced by Google and at the time closely tied to Google+.

Advertisers Have Mixed Confidence in Blockchain

One of the biggest stories of 2018 was the rise (and fall … and then rise and fall and rise and fall again) of Bitcoin. The cryptocurrency took the markets and media by storm, as a single Bitcoin reached nearly $20,000, an astonishing sum. Yet Bitcoin, and a bevy of other cryptocurrencies like it, has experienced a sharp pullback since — if you need a reason why, just try paying with digital coinage at your local deli. Still, many are bullish on the future of cryptocurrencies, and especially the underlying technology behind it all.

Blockchain is a decentralized online ledger system that processes, documents, chronicles and publishes records of information, often transactions such as buying and selling. Supporters hail it for its transparency, as entries cannot be edited unless under extreme circumstances, and automation benefits. 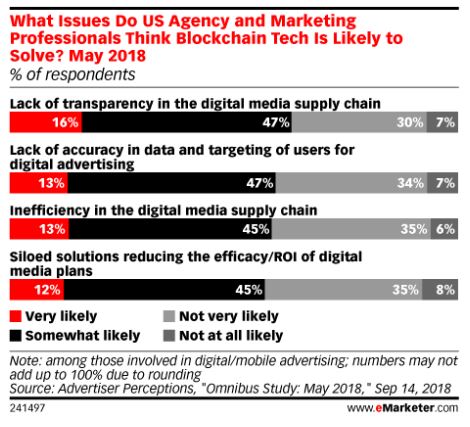 Its use in marketing is still very much in the early stages, but with potential promise. This much was evident in a recent survey eMarketer reported on that examined marketing professionals’ thoughts about blockchain:

For more insight into how marketers are approaching blockchain, head to eMarketer.

The intersection of marketing and technology is busy these days. As marketers adopt more emerging technologies like machine learning and AI, their goals have changed. New tools grant new abilities and generate new insights, which leads to new use cases. Observing this trend, the Massachusetts Institute of Technology recently spotlighted the rising influence of intent and its impact on marketing methodology.

The primary takeaway from the MIT Technology Review Insights article is that marketing is more behavioral based than ever, and increasingly growing so. Practically, this means marketers are looking less at traditional KPIs and metrics of engagement, instead examining more closely customer habits, preferences and tendencies.

Data is the lifeblood of such marketing, and businesses are in possession of evermore nuanced and granular customer data thanks to machine learning and AI. Such tools, as MIT explains, have informed initiatives to better tailor email marketing campaigns in TGI Friday’s case. Diners are sent personalized messages based on their consumption and purchase histories. What cheese fanatic wouldn’t want a timely message for promotional mozz’ sticks?

Check out the entire piece at MIT Technology Review.

The State of Customer Loyalty in 2018

Consumers often get a rep for being a bit fickle. But that myth has been totally busted in a new survey from Yotpo, a CRM cloud solutions provider. In it, 90 percent of consumers identified themselves as equally or more brand-loyal compared to a year ago.

What drives loyalty? More than 50 percent said it was the product, while 25 percent said it was great deals — which would be of interest to marketers. One relevant insight is that it does take time to build loyalty, as 37 percent of consumers said it took five or more purchases for them to lock in their brand affinities.

While consumer expectations are becoming more intense (we can thank Amazon for normalizing free two-day shipping), the lifetime value of loyal brand evangelists remains worth the effort:

Dig into the insights further at Yotpo.

All in all it’s been a whirlwind of a week for content marketing news and insights. Check back next friday for a new installment of the Content Marketing Weekly.