Data Is Everything: Netflix Is Pouring Money into Marketing

The streaming giant has increased its marketing budget from $1.3 billion to $2 billion this year in preparation for a raft of original content releases, including 80 movies. The budgetary boost, revealed in a Jan. 22 communication to shareholders, shocked marketers, most of whom had accepted the Noisy Cricket theory, which posits that projects involving extraterrestrials and Will Smith require no promotional spend.

Netflix Chief Product Officer Greg Peters does not subscribe to this theory and instead bases his work on objective user data, which seemed to indicate that an influx of funds was necessary, Digiday reported. In addition to making new investments in marketing, the company has hired in-house creatives to execute forthcoming campaigns.

A Giphy GIF Search Engine Has Come to Instagram Stories

The 250 million people worldwide with active Instagram Stories accounts can now embed GIFs in their posts. The social media company debuted the new feature Jan. 18 in quite possibly the softest launch ever.

Users in Brazil, Indonesia and the Philippines who logged into the platform on that fateful day suddenly found themselves with access to a GIF keyboard with animated stickers from Giphy, according to The Verge. Instagram rolled out the feature to all users Jan. 23.

The company plans to release other new application options over the “coming weeks,” including a modified cropping and sizing component that will make it possible to upload image and video files of all ratios. Meanwhile, Snapchat has removed all of the text from its interface so that only the most scatterbrained teenagers can navigate it.

Google’s Search Domination Is Eroding Because of Amazon, Apps

The folks over at Amazon, all gassed up on quinoa salad and kombucha tea pillaged from Whole Foods, have set their sights on another iconic brand: Google. The e-commerce firm is gaining ground on the search giant by establishing itself as a go-to source for mobile shoppers who type products directly into the Amazon application rather than embarking on a Google search, AdAge reported. Other niche companies like Apple and Pinterest are not helping the situation, as they too seem to be swiping market share from the once-dominant search firm.

Analysts doubt Amazon will completely usurp its colorful competitor, as Google continues to perform well with desktop users and refine its offerings. Most recently, the company rolled out its new Search Console, which gives authorized users the power to view new reports on AMP status, index coverage and Search Performance. Google says the platform opens up communication between website owners and its support staff, facilitating more responsive troubleshooting practices. I guess this means we can hold off on that Amazon Analytics training?

Why Quartz Has Gone Niche with Newsletter Topics

Quartz, an online outlet under The Atlantic umbrella, debuted a new newsletter back in September. The daily send, called Quartz Obsession, comes stuffed with data points, graphics, quotes and other relevant fragments of content designed to act as entry points into granular topics, like the origins of the little black dress.

The unique newsletter maintains an open rate of nearly 80 percent. Its forwarding rate is astronomical as well, suggesting that readers are more than happy to share the Obsession with nonsubscribers. The publication attributes the success to the writers and researchers who search the zeitgeist for engaging topics that are pertinent yet removed from the daily news cycle. So basically we’ve done this all wrong.

Marketers have seen this coming for a while, as numerous software firms had, in the past, publicly dabbled with intelligent programs that could develop content. Now those experimental solutions are maturing, hitting the market and proving their worth. At least automated scribes haven’t entered the realm of fiction writing, right? Right!? RIGHT!? 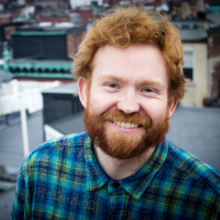