Product quality trumps everything. It’s a nice thought, but not always the case with consumer audiences. And it’s especially not the case when it comes to the film industry. How else can you explain the continuing popularity of the “Transformers” franchise? Or the fact that they made seven (yes, seven) “Police Academy” movies? Who needs that much Michael Winslow in their life?

In reality, marketing matters nearly as much as the actual movie itself. A bad movie with good buzz can still make bank, but a great film can go unappreciated for decades (“Vertigo,” anyone?). We don’t mean to single out the film industry as being especially egregious when it comes to shrewd marketing practices spinning gold out of nothing, but there’s no denying that Hollywood history is rich with bold marketing stunts and grassroots campaigns that, for better or worse, put butts into seats.

Take a look at the most clever and memorable movie marketing campaigns ever devised. Who knows? You might just learn something from these silver screen mavericks: 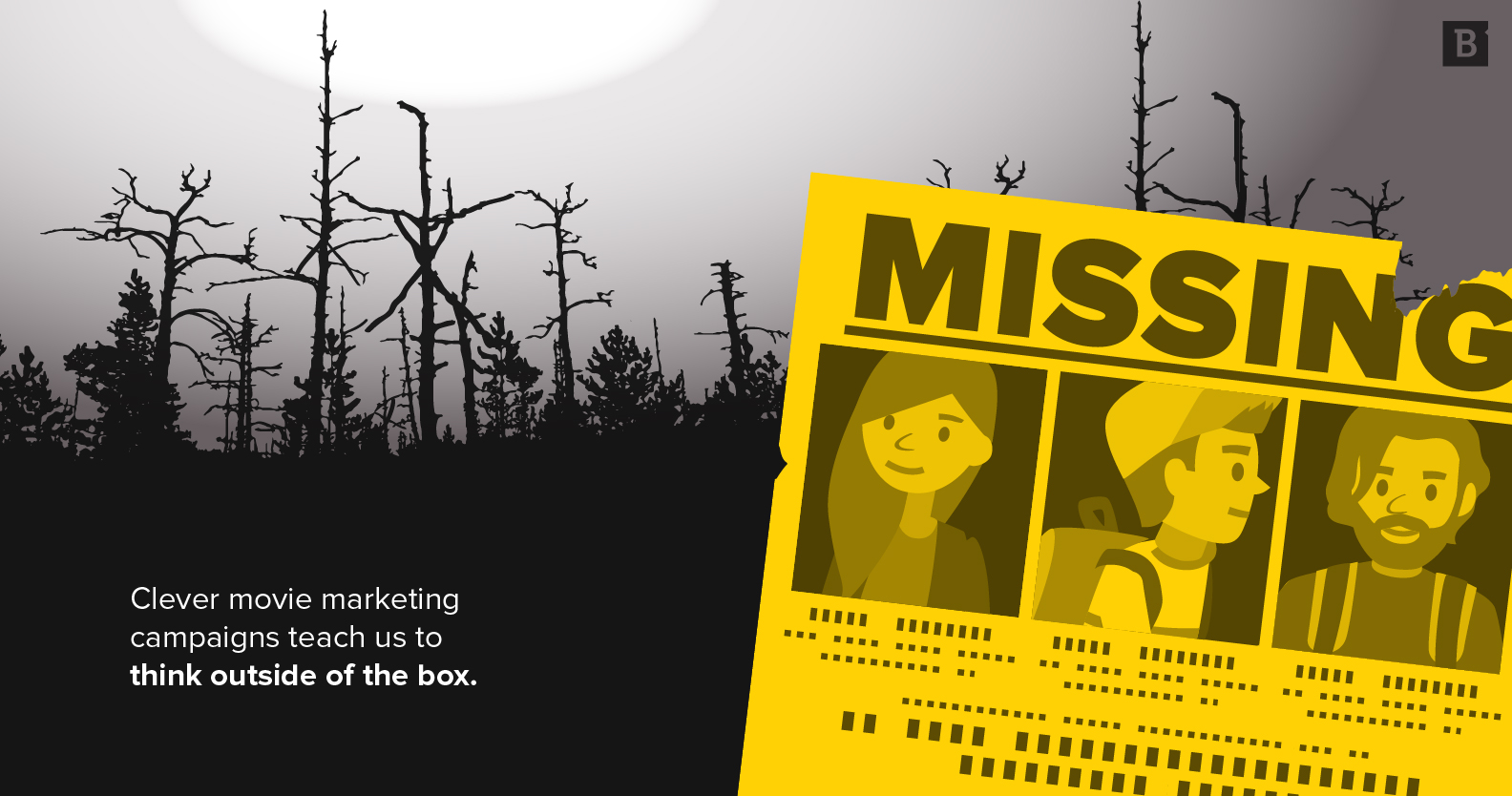 Film snobs often treat the cinema as a sacred space, for better or worse. There’s no denying that Alamo Drafthouse’s famously rigid policies on texting, talking and phone calls makes for a more enjoyable moviegoing experience. But, taking such a binary view of what behavior is acceptable inside the theater does limit any kind of experimentation on that front. It’s hard to imagine another William Castle coming along in that type of strict cinematic environment.

For those who don’t know, Castle was one of Hollywood’s leading provocateurs during the heyday of 1950s B-movies. The producer continually looked for new ways to entice audiences to watch his films, usually by incorporating a weird gimmick into the actual theater experience.

Case in point: 1959’s “House on Haunted Hill” featured a hoisted prop skeleton that would float above the audience’s heads during a climactic scene.

That same year, Castle released “Tingler,” a horror flick about a parasite that attaches itself to victims’ backbones, causing a shiver to run up their spine whenever they feel afraid. Castle’s brilliant idea to draw audience members into the movie was to install electric buzzers into the theater seats, giving them the sensation that they themselves had been infected by the parasite.

Perhaps the most audacious of Castle’s stunts involved the 1961 film, “Mr. Sardonicus.” Moviegoers were handed poll cards to determine the protagonist’s ultimate fate at a key point in the story. Castle himself appeared on the screen asking the audience to choose whether the titular character lived or died. Here’s the kicker: The whole poll was just an illusion of choice. His fate was sealed regardless of how the audience voted. Movie historians question whether a “happy” ending was ever even filmed at all.

William Castle was truly one of a kind. Hollywood had never seen a marketing force like him before, and likely never will again.

Hitchcock keeps moviegoers in the dark

Sometimes even geniuses fall ass backwards into success. There’s no question that Alfred Hitchcock was a master of both suspense and movie marketing. But one of his greatest promotional moments came about entirely by accident.

1960’s “Psycho” has arguably one of the biggest bait-and-switch plots in film history, with the ostensible protagonist getting killed off before the halfway mark. Hitchcock was fiercely protective of his movie’s plot twist, going to great lengths to prevent audience members from hearing about it beforehand. The film’s actors were barred from doing publicity interviews, and the trailers gave away precious few details regarding the story. Hitchcock wanted the audience to be completely in the dark about what his film had in store for them.

Of course without even the base-level publicity and marketing to support it, how do you get people interested in your film?

Hitchcock’s secrecy helped generate interest, but what really put things over the top was his famous directive given to theaters to not allow anyone from entering once the film started. Mostly intended to ensure that his film was viewed as intended, Hitchcock’s policy had two major effects on moviegoers:

Although Hitchcock’s main goal was to protect the integrity of his film and the moviegoing experience, he inadvertently created a ton of buzz for the low-budget thriller.

‘Star Wars’ charts its own path

“Star Wars” has been a cultural force for more than 40 years, and somehow has never been more popular. It’s easy to forget that this science fiction juggernaut was not even close to being a sure thing when it was released in 1977. Cast and crew speculated about its box office prospects, with many believing they had a massive bomb on their hands.

Say what you want about George Lucas, but back in the ‘70s, the man was a movie marketing visionary. Before “Star Wars” was released, Lucas bucked typical publicity practices at the time by actively courting merchandising opportunities and getting a line of toys ready to hit stores before anyone knew if the film would even make its budget back.

That approach has become standard practice for every would-be blockbuster, turning just about every major Hollywood film into a potential merchandising goldmine. Even now, “Star Wars” toys dominate department stores, proving that there’s more than one way to build a brand.

‘Blair Witch’ fools us all

The found-footage sub-genre is pretty played out at this point, but there was a time when it was a legitimately revolutionary approach to film-making.

Schlocky horror flicks like “Cannibal Holocaust” disgusted audiences in the ‘70s and ‘80s with their seemingly realistic depictions of violence, but the found-footage really came into its own with 1999’s “Blair Witch Project.”

The film follows three “real” filmmakers as they trek through the Maryland woods in search of the titular witch. Things quickly go south, as they tend to do in horror films, and the protagonists are besieged by a seemingly supernatural force.

Plot-wise, it’s a pretty by-the-numbers story, but where “Blair Witch” stood out was with its marketing campaign.

With a budget of just $60,000 and three unknown actors in the leading roles, “Blair Witch Project” looked like the real deal: a genuine piece of found-footage that chronicled a potentially paranormal event. Producers doubled down on that veneer of authenticity, going so far as releasing fake missing person posters for the cast members and asking film festival attendees for information on their whereabouts.

It was all very clever, but what really establishes “Blair Witch Project” as a milestone in movie marketing was its use of the then-still-nascent internet.

Marketers posted fake newsreels and police reports on the film’s website, further driving the message that the movie was an authentic piece of found footage. Today, that kind of tactic is pretty standard stuff for a low-budget horror film, but back then, when content on the internet could not be easily refuted, it was revolutionary. Even today, the movie’s marketing overshadows the content of the film itself, which hasn’t aged quite as well.

“Blair Witch Project” may have set an early template for movie marketing in the digital age, but “Cloverfield” arguably perfected it. During the runup to the film’s 2008 release, the film’s marketing campaign teased moviegoers with cryptic information regarding the movie without ever betraying any details about the plot itself.

Early trailers confused and intrigued movie theater audiences in equal measure, as they focused on intimate, handheld recordings of a group of New York yuppies before cutting to disconnected glimpses of carnage across the city. It wasn’t much to go off (the trailers didn’t even include the film’s title, kicking off even more speculation), but there was enough to whet the appetite of film fans everywhere.

Producer J.J. Abrams and his marketing team went on a tear trickling out hints about the film’s plot that served as much to confound movie hounds as they did to bring things into sharper focus. Mysterious websites connected to the film sprung up, including official web pages for fake companies and consumer brands featured in it.

Abrams created one of Hollywood’s first viral sensations, encouraging internet users to join in and crack the case. Speculation surrounding the film continued to ramp up, and it was eventually released six months after the initial teaser trailer to major acclaim and box office success.

Man, what is it about horror movies and innovative marketing?

By the time 2007’s “Paranormal Activity” was released, found footage had been done to death. No one was going to mistake a story about a couple recording their haunted house using baby cams and security devices for the real McCoy, so the film’s marketers had to go a different route to put cheeks in chairs.

The movie did well during test screenings – really well.

While most studios would be content with the knowledge that their film left an impact with early audiences, “Paranormal Activity” producers decided to use the footage from test screenings in the movie’s marketing campaign. Rather than focus on the movie itself, “Paranormal Activity” commercials instead showcased audience reactions, with night-vision cameras capturing frightened moviegoers screaming, gasping and recoiling in shock.

It worked like a charm, “Paranormal Activity” generated a lot of buzz on a small budget, and kicked off a long-running movie franchise.

In the grand scheme of the Marvel Cinematic Universe, “Black Panther” was not expected to be a heavy hitter. Although it’s $200 million budget sounds impressive, compare that with the $250 million budget given to “Captain America: Civil War” two years earlier. Then there’s the film’s release date, which was slated right in the thick of the winter doldrums. Usually, when a studio releases a movie in January, it doesn’t have a ton of confidence in that film’s box office prospects.

Despite all of that, “Black Panther” became an instant classic and a bonafide cultural phenomenon, raking in more than $1.3 billion worldwide.

The film’s producers and creators knew what a huge deal it was to depict the MCU’s first African-American superhero and actively marketed the film to those demographics. They made a point to bring on persons of color at every stage of development, from the screenwriters to the director and, of course, the cast.

“Black Panther” TV spots featured prominently during programs that had high viewership numbers with African-Americans. For instance, the movie’s very first teaser was aired during the NBA Finals.

“Black Panther” embraced black culture in a way that arguably no other major Hollywood movie ever has, coinciding with the rise of movements like Black Lives Matter. By taking its established movie-making formula and targeting an audience segment that was clamoring for greater representation, Marvel had one of its greatest success stories to date.

If there’s one takeaway here, it’s that it often pays to think outside the box. You don’t always have to follow what everyone else is doing with their marketing campaigns. Heck, if you want to really stand out, you probably shouldn’t be. Don’t be afraid to try something new and see if it sticks. It might just be worth the risk.