I finally saw Tiger King, and now I understand.

A gun-toting, tiger-wrangling, country-music making, gubernatorial candidate turned prison inmate with coronavirus does battle with Carol Baskin, a mother-earth type figure who may or may not have killed her husband and fed his remains to tigers.

It’s spangled with infidelity, group weddings, cheap mercenaries, tiger maulings, arson, betrayal, tragedy and every other form of gratuitousness you can think of.

But if I really take a hard look at this, peel back its layers and question its worth beyond being a very welcome distraction from COVID-19, I sort of draw a blank.

It was great content, don’t get me wrong. I couldn’t look away. And much like the hired hitman who decided to go to the strip club instead of killing Carol Baskin, I was indeed distracted.

Still, this isn’t “Blackfish,” as so many before me have pointed out. I would be (pleasantly) surprised if it catalyzed any sort of lasting change in the big-cat community.

And of course, I want to see change, like so many others. But Joe Exotic said it best himself in the documentary:

Which brings me to the first of 3 lessons I learned about content marketing from the rise and fall of the Tiger King. 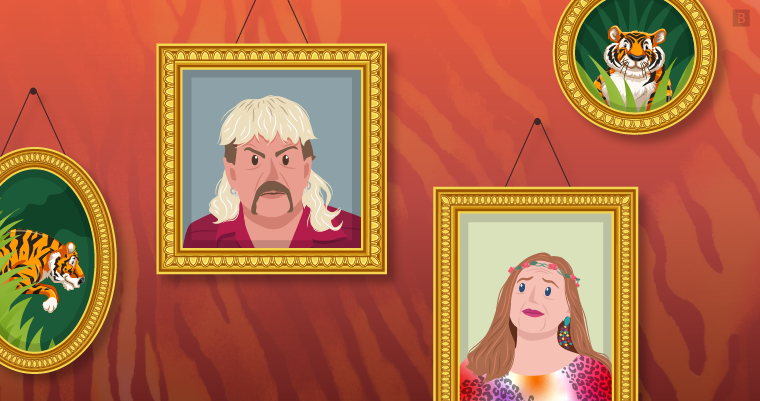 1. Data can show you a lot about people’s intentions

And when it comes to Tiger King, the intention was perhaps first and foremost to be distracted.

This isn’t to say people aren’t open to watching a documentary about how screwed up the big-cat trade is in this country.

But in case you needed more proof that this is indeed about Joe Exotic’s antics and not about saving tigers from captivity, forced breeding and even death, just look at what has trended on Google search over the past month: 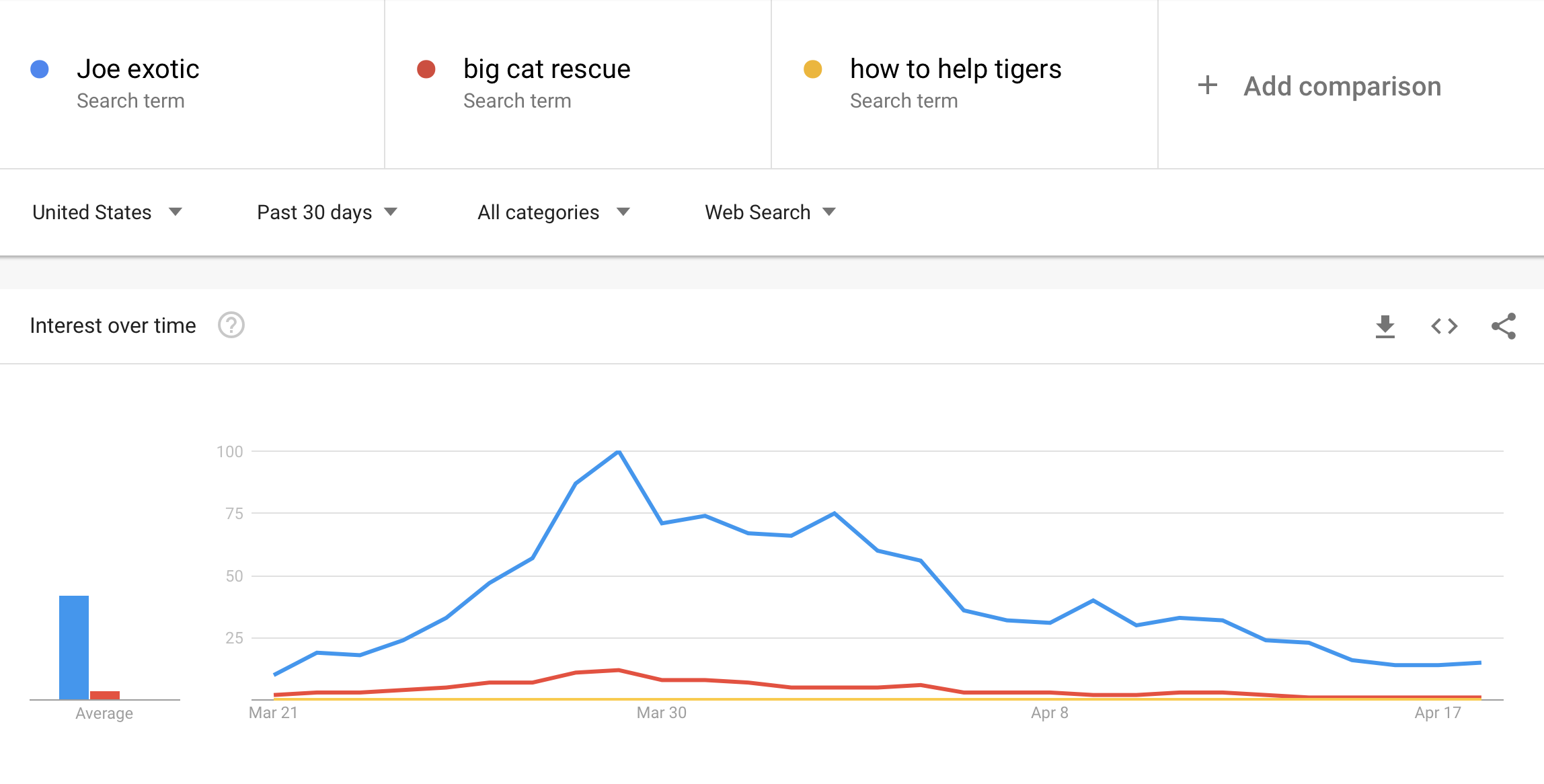 Big Cat Rescue (the red line), which is Carol Baskin’s organization, got a slight albeit very temporary boost. But “how to help tigers” (the yellow line) is completely flat.

The blue line, which is already in decline, is Joe Exotic.

For good measure, I reviewed several iterations of tiger-helping terms, including:

All of them were flat.

I don’t say this to disparage people’s intentions. As I said, the documentary was no “Blackfish.” This is apparent from its very own billing: “Murder, mayhem and madness.”

Rather I point this out to highlight how incredible it is that we can literally gauge the world’s interest and even draw inferences about its collective intentions using search data. This chart certainly doesn’t tell us anything about whether new big cat protections are on the way, or if legislators have in fact been moved by this documentary.

But it does highlight that, on the whole, people were much more interested in Joe Exotic, the character, than saving tigers, the cause.

The data also reveals that the Tiger King is very, very much in decline.

Which brings us to our second lesson:

In case you haven’t noticed, everyone and their grandmother is piggy-backing off Tiger King’s popularity.

PeopleTV, the New York Post, The Ellen Show and countless other content creators have posted Tiger King-related content in the past few weeks, trying hard as they can to ride this quickly cresting wave of popularity.

And who could blame them?

34 million people tuned into Tiger King within the first 10 days it was on Netflix. That makes it the most popular show on the streaming service, ousting “Stranger Things” season 2.

Yet, I somehow feel like I learned more about people and felt more compelled to change my behavior from watching a fiction show about kids discovering other dimensions than I did from watching Tiger King.

The thing about content appetites is that they change based on what people need and want, and there is an argument to be made that a coronavirus-ravaged world needed Tiger King this past month.

That raised a big hypothetical question: What if Tiger King had been released a year ago from today? Would it have garnered as much attention, as quickly?

The question is hard to answer, sort of like when Joe Exotic asked, “Are the animals happy? Who knows.”

But I 100% believe that Tiger King would not have been as popular in any other circumstance.

Before its release, Netflix and other streaming services had already begun reporting increases in viewership. Anecdotally, my 64-year-old father, who doesn’t own a smartphone and has never watched Netflix prior to lockdown, binge-watched “Love Is Blind” a few weeks ago.

We are living in unusual times, and that set the scene for a documentary like Tiger King to do unusually well.

The point is, the timing of content creation plays a colossal role in its success or failure. And while no one can plan for something as life-altering as a pandemic, the more thought you put into the timing of the content you create, the better.

3. SEO has changed a lot – and it’s changing again

There is a literal search engine optimization war in this docuseries (spoiler alert).

Sometime around 2010, Doc Antle pointed out that Carol Baskin’s site was primed to get attention because of how well it ranked in Google.

“She’s the first choice every time – supersedes all the zoos; she’s at the top of all search.”

Joe Exotic subsequently employed black-hat SEO tactics, that is, until Carol Baskin successfully sued him for trademark infringement to the tune of $1 million.

(Incidentally, that lawsuit was a huge turning point in Joe Exotic’s blood rivalry with Carol Baskin. Things started to get darker.)

But there are a few things to keep in mind here:

First, SEO has changed since 2011, and it’s pretty wild to think there was a time when claiming a domain that’s similar to a more popular site actually worked to boost search presence.

Second, regardless of how you feel about Carol Baskin, she got ahead of SEO, and for that matter, social media marketing – even before many for-profit corporations.

And that once again speaks to the importance of timing.

There’s a case to be made that COVID-19 having pushed so many operations online is accelerating the importance of web-based media.

My point: Now is the time to start being really thoughtful about how digital may be forever changed as a result of this pandemic, and what your plans will be for it moving forward.

I never thought I’d say this, but all you cool cats and kittens may want to take a page out of Carol Baskin’s book here.

And we want to hear it.

What did you learn from Tiger King? And do you disagree with my takeaways?

We’re all ears. Share your thoughts in the comments below.

What does the world of content marketing look at the beginning of 2020? And how will it be different by the time 2021 comes around? Find out in our State of Content Marketing Report.