In 2013 there were 152 million blogs on the web, with a new blog created every half second. I’m not talking blog articles here, I’m talking 152 million individual content production centers.

So what? Can you ever have too much information?

Yes! That’s a ton of content, and the result is a massively disproportionate amount of “Meh” noise in relation to “This is so good I’m going to die” content.

But how did this happen?

The internet has jaded us, hasn’t it?

For those of you who date back to the times of “AOL 500 hour free internet access” CDs, do you remember how exciting it was to find any “Information” on this new “Internet” thing? It was like magic – you punch words into Netscape Navigator and it gave you answers.

And what about flame GIFs?!

For starters, the honeymoon is over. After 15 years of marriage, the rose-colored glasses have been doffed, and in their place are reading glasses. We demand our content have substance and opinion. (We’ve become such adults.) In reality, our subconscious filtering mechanisms are so advanced – and need to be – to filter the wheat from the chaff.

The brain is loaded with 34 MegaBytes of information every day, and it processes 100,000 words per day. This requires an extremely low tolerance for “Meh” content to pass through the filter in order to function at a high level.

Then there’s that creepy robot, Google, who knows us better than our closest friends and family. (Beg your pardon while you clear your search history.) Google is watching our behavior, listening to our one-way conversations with its search bar and understanding what we like. It’s because of this listening and learning that Google knows we like substance in our content, and it has adjusted its algorithm accordingly.

It’s a simple question of supply and demand. For example, if your living room was filled with 2,000 bologna sandwiches, an additional bologna sandwich would be of zero value, and would probably make you puke. But if your friend showed up with a salami sandwich, you may cut a few throats to get your hands on it. Or if you prefer a less violent approach, you would pay a premium for it.

The average blog post in 2016 took three hours and sixteen minutes to write, a 26 percent increase from the previous year. Expect to see that number increase in the future. 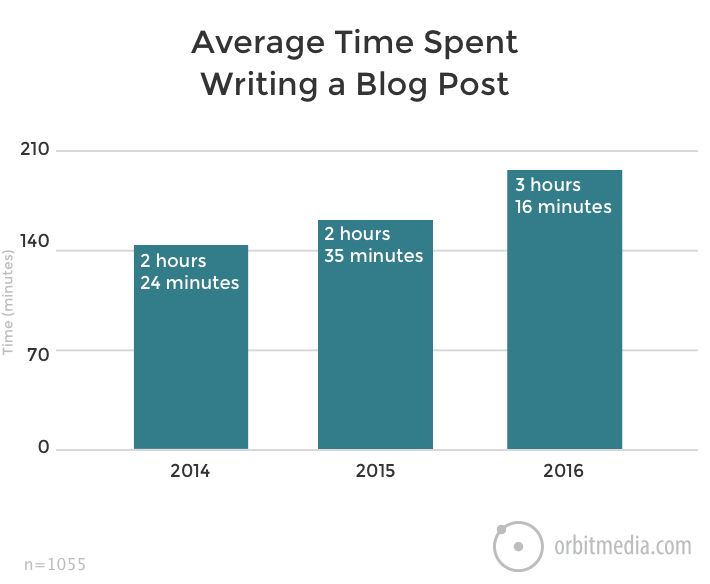 So what’s the future of bologna sandwiches?

Supply and demand is as certain as death and taxes. The market has reached peak saturation of “Meh” content, and there is no reason to expect that people are going to stop filtering it into the trash with the rest of the noise. Companies and agencies will continue to crank it out, but people won’t read it. These companies and agencies will start to feel the pain of failing content marketing programs.

Then once the market is flooded with salami sandwiches, someone will show up with a prosciutto sandwich, and the cycle will repeat itself. The end result is incrementally better content and more resources put behind the production of that content.

So what do we do?

One thing is for certain: Our hunger for substantive content is insatiable. Expectations are higher and tolerances are lower. You should consider the last great piece of content you remember reading and compare it to a mediocre piece. What were the differences? The answer will most likely be rooted in one of three areas: “It made me laugh,” “It taught me something,” “It helped me make more money.”

In a world full of bologna sandwiches, you need to be thinking salami.