It’s the ultimate irony: A generation raised on cutting-edge surround sound explosions in their summer blockbusters now prefers to watch videos in silence. Charlie Chaplin would be proud.

Don’t get us wrong – sound is still vital to your video marketing strategy. It’s part of what makes video such a powerful medium.

However, with the rise of mobile video and social media usage, an increasing number of consumers are watching clips sans sound. 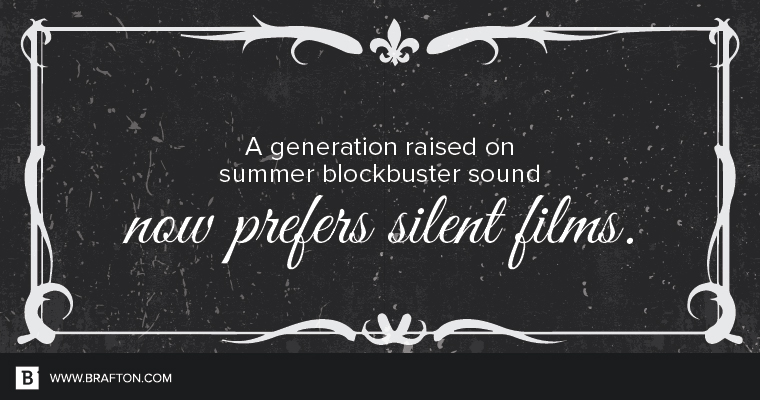 The majority of Americans own smartphones, and billions of people around the world can say the same. What’s more, mobile and tablet devices recently outpaced desktop computers for internet access, meaning these same smartphone users are hopping online while they’re on the go.

You may have crafted your video content with a home theater experience in mind, but odds are people are watching your brand videos during their morning commute. And no one wants to be that person – the one blaring your video blog for all the train or bus to hear.

Even if your audience has headphones in, chances are their attention is being split, and the last thing they want is some video to cut in like a desperate suitor at a school dance.

“People may be listening to music, or a podcast, and suddenly their phone starts blasting loud music with voiceover yapping away about the latest software-as-a-service product,” said Brafton Senior Creative Director Perry Leenhouts. “Most likely, you will get the opposite effect of what you’re going for: People clicking away quickly, and moving on to the next piece of content.”

Of course, users should always have the option of receiving audio. The important thing is it isn’t forced on them.

“I would stay away from using sound in your videos automatically on social platforms, with the exception of YouTube,” Perry said. “When a viewer visits YouTube or your website, they are choosing to watch a video, and are expecting the video to have audio.”

Still, it’s clear modern marketers must appeal to a wide swath of consumers who may be watching but not listening. Fortunately, doing so isn’t difficult.

There’s no denying it: Video with sound will always be more impactful.

However, there’s plenty you can do to ensure your video remains engaging with the sound off.

First, you have to make sure the visuals in your video are as stimulating as possible. Imagery must draw viewers in and hold their attention. A static talking head won’t do you any favors.

Next, make sure the video is heavily branded. People should be able to easily tell who made the video right away.

It’s also vital to get to the point as quickly as possible. Most brand videos should be short and sweet. This goes double when they’re playing without sound. Long, lingering shots of open fields may be pretty, but they won’t mean jack to a person watching silently on their cell phone.

Finally, and perhaps most importantly, remember that on-screen text is your friend. Start with something attention-grabbing, be it a bold statement or interesting question. Then provide subtitles for any voiceover.

And for the love of God, make it legible.

“Ideally, you should also give the viewer the option to turn off the subtitles if audio is turned on,” Perry pointed out.

Mobile video traffic accounted for 60 percent of total mobile data traffic during 2016. By 2018, 2.67 billion people around the world will be using some form of social media.

Your audience is out there, and it’s waiting. Just make sure you’re not too loud when you go out to meet it.

Key Traits to Look For When Hiring Marketing Writers (Infographic)

Want your marketing content to dazzle and captivate your target audience? You need a top content marketing writer, and here’s how to spot one.

Two things we love at Brafton? Marketing and podcasts. Put those together, and you have a whole bunch of happy marketers.