“I watched every season of Game of Thrones and all I got was this great branding advice,” said every marketer ever.

It’s true: There are very few places to find better brand development tactics than inside the mind of George R.R. Martin himself. And on your company’s long journey toward securing its rightful position atop the marketing throne, there are a number of lessons to learn (and mistakes to avoid) in terms of your company’s brand.

Your brand is your lifeblood, so nurture it like you would three cryptic dragon eggs in the flames of a funeral pyre – professionally speaking, of course. 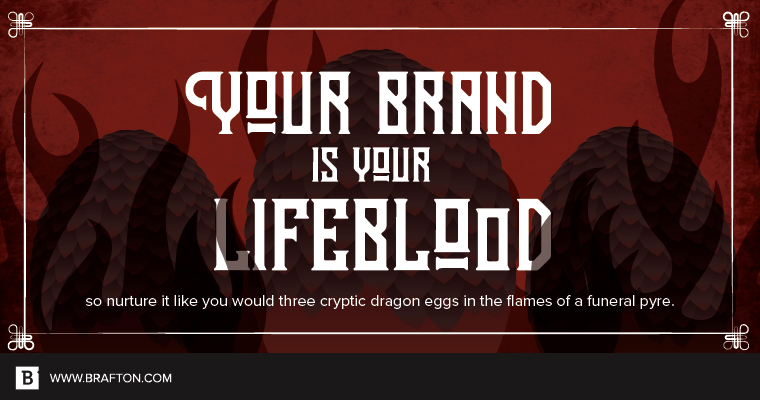 Imagine for a moment entering a massive trade show with thousands of presenters and booths. Above every exhibit is a giant banner proudly displaying each company’s logo – maybe even a trademark or motto, as well.

Looking at banners alone, which of these companies are your competitors? Hard to tell, right? The same probably goes for your logo – on first glance, do attendees know who you are, what you do or why you’re different?

In Season 6, Episode 9, “The Battle of the Bastards” hardly pans out like Bolton and his army of northmen intended. That’s because an unannounced, unidentified (at first) swarm of soldiers swept into battle at a critical moment, allowing Jon Snow and Co. to snatch victory from the jaws of defeat.

With combatants on both sides stunned and unclear on what was transpiring, House Arryn, led by Lord Petyr Baelish and the Knights of the Vale, slammed into the undefended phalanx of Bolton’s troops. The rest, as they say, is fictional history.

The subtext here is that among the disarray and clamor of battle, House Arryn’s presence was unknown until it was too late, at least from Ramsay’s viewpoint. Had Bolton immediately recognized the crescent moon and falcon sigil flying from the hostile Arryn banners (their brand, if you will), he could have acted more quickly and saved his army – and his life.

While your trade show experience need not be as calamitous or bloody as the example above, one thing is certain: Design matters.

Your logo matters. Your colors and typography matter. Your symbolism matters.

This is your brand – your key differentiator among a crowded field of companies aiming to storm the walls of your market share.

Remember, branding is 80 percent visual, so you need to let the world know you’re unique in a visually arresting way. Developing your brand image with optics in mind can help your company stand out from competitors and earn the instantaneous recognition of potential customers.

You don’t have to be as self-righteous as Tywin Lannister or even as honorable to a fault as Ned Stark (we miss you, Ned), but your brand does need to represent and embody loyalty.

How do you create a brand that promotes loyalty, though?

In Season 2, Episode 9, “The Battle of the Blackwater” pitted the Iron Throne against the ascendant (and true heir) Stannis Baratheon. Acting as Hand of the King and charged with defending King’s Landing from an amphibious assault, Tyrion Lannister emboldened his troops to remain loyal to the crown and not cower under the fear of a stag-blazoned flotilla.

His speech hits upon the true motives of loyalty – loyalty is not enforced; it’s received, though you have to know how to motivate each and every individual according to his or her value system.

Scare tactics aside, what’s truly being said is, “Empower yourself to do what’s right. Pride yourself on protecting your values. I’m here to help you conquer your fears.”

That’s a powerful image for a brand to project, and a strong message to send to your customers.

That’s because at the heart of every transaction is a customer who has made a conscious decision to eschew other brands and purchase from yours. Even if competitors offer cheaper prices, faster shipping, better rewards programs or superior quality, loyalty still trumps all.

Plus, what are the odds that another brand offers all of the above? Sure, maybe you don’t have a monopoly on every product category or brand KPI, but if you can convince a customer to purchase from you once – just once – then you’ve opened the door to sustained loyalty.

Developing brand loyalty begins by honoring commitments to customers and satisfying their demands to the point that they no longer even entertain other brands’ overtures. For example, not many people switch back and forth between iPhone and Android phones, and even fewer hated Walder Frey one day and then loved him the next – we all hate Walder, right?

That is to say, most lines of loyalty are perpetual as long as you retain the day-in, day-out commitment you’ve pledged to the public.

Now in the world of Westeros, loyalty is much more fickle. Just ask Robb Stark.

But don’t let that stop you from enjoying the upcoming season of Game of Thrones (airing July 16th!!!) or from putting in a little extra effort in your next brand strategy brainstorm.

In all seriousness, though – we all hate Walder, right?